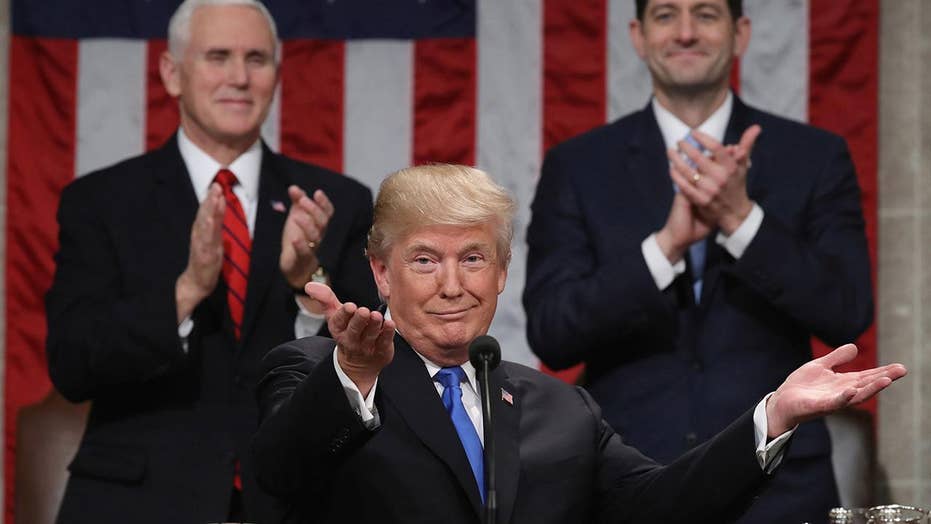 The 2016 election revealed American citizens’ crisis of confidence in their political establishment. More than a year on, that establishment ought to take the opportunity of President Trump’s first State of the Union address to think seriously about our politics, our Constitution, and our cultural and political life together.

More than anything else, President Trump spoke to Congress about individual Americans and the meaning of American citizenship – often using criminals, adversaries and hostile foreign powers as foils.

The president’s speech was about that most fundamental of political and human distinctions – friends versus enemies – but it built to a vision of American justice rooted in the sovereignty of the people.

Americans, said the president, are “one team, one people, and one American family” united by “the same home, the same destiny, and the same great American flag.”

Using the example of Preston Sharp – a 12-year-old boy in the gallery who helped place more than 40,000 American flags and flowers on veterans’ graves – President Trump did what he often does so skillfully and instinctively: he engaged the fondness the majority of our citizens have for the basic symbols of American patriotism in our ongoing cultural and civic battle over the meaning of American justice.

President Trump was putting protesting athletes and spoiled culture warriors on notice: “Reverence for those who have served our nation reminds us why we salute our flag, why we put our hands over our hearts for the Pledge of Allegiance, and why we proudly stand for the national anthem.”

The president spoke of veneration, civic duty and the heart of civic life found in “faith and family” rather than “government and bureaucracy.”

Rather than appealing to anti-government dogmatism, President Trump spoke of the importance of “the bonds of trust between our citizens and their government” and linked trust in government to constitutionalist judges and restoring bureaucratic accountability. This was a call to swamp-draining, properly and constitutionally understood.

The speech was full of personal stories, accompanied by guests in the gallery to make the policy and political arguments more human. Whatever the merits of this relatively recent presidential practice, it’s likely here to stay. President Trump must be named the new master of it.

The most memorable image was, of course, that of North Korean political refugee Ji Seong-ho hoisting his crutches in the air as defiant symbols of what was surely one of the more horrific personal stories of tyranny ever presented in the House chamber.

Everyone stood to clap for that display and for the tribute to the American college student Otto Warmbier, who also made it out of North Korea – after being held as a prisoner for 17 months – only to die a few days later.

After tying a porous immigration enforcement system to recent terrorism and gang violence, President Trump launched a rhetorical missile. When he declared that “Americans are dreamers too” the president undermined the Democrats’ framing of the immigration issue as a purely social justice cause. His remarks about the issue fit it, rightly, into the context of national security and sovereignty.

Despite broad public agreement on generous consideration for legitimate DACA recipients and the rest of the so-called “Dreamers,” the more Americans learn about chain migration and the diversity visa lottery the more their righteous indignation grows.

For many Democrats and Democratic activists in the gallery, however – you could hear the grumbling and hissing – indignation was reserved for anyone who dared question the status quo.

This may be a wedge issue for both parties in different ways, but President Trump may yet split the Democrats first, paving the way for a deal in which he and America come out ahead. Recent events have so far vindicated his strategy.

Finally, a very important if less memorable part of the speech should be noted: the revival of civil service reform. President Trump called on Congress to empower Cabinet heads to remove bad bureaucrats. The power to remove executive branch officials, and even so-called “independent” regulators, must be part of any project of constitutional restoration.

The Trump administration’s budget proposal, released Tuesday, included a substantial commitment to civil service reform – or, in the words of the document, ‘hiring the best and firing the worst.’

The fight over presidential control of the bureaucracy s goes back to the first decades of the administrative state, when in 1926 a former president sitting as chief justice of the Supreme Court – William Howard Taft – made the case that James Madison had made over a century earlier: there must be a ‘chain of dependency’ running from the people, through the president, to all executive officers, including bureaucrats. If we are to keep our republic, the president and agency heads must be able to fire subordinates.

This problem of the administrative state – or the deep state, if you like – touches a fundamental principle of American government. President Trump spoke of regulatory reform in terms of liberty, prosperity and the American economic engine, which he was right to do. Deconstructing and reforming the administrative state, however, is about equality as much as it is about liberty.

The most famous line in the Declaration of Independence is: “We hold these truths to be self-evident, that all men are created equal, that they are endowed by their creator with certain unalienable rights.…”

Individual equality and its implication – the equal protection of equal and individual rights – are at the foundation of our government. No individual or group can rightly rule us without our consent, so no bureaucrat ought to exercise control over people we elect or those they rightfully appoint.

The principle of modern bureaucratic rule, unlike the principles of the Declaration, is that “neutral” practitioners of the “science” of government administration are entitled to protection from mere politicians, which means that they’re protected from control by the people through our elected representatives.

President Trump and those around him appreciate this fact. It was therefore fitting for him to end his speech with an invocation of the Founders and their preference for self-government over tyranny.

The president tied the “living monument” of the U.S. Capitol dome, with the House and Senate under it rather than some bureaucracy, to the people it serves. He tied George Washington, Thomas Jefferson, Martin Luther King and Abraham Lincoln to the American people and her heroes “all around us.”

President Trump ended with a statement thoroughly and originally American: “This Capitol, this city, and this nation, belong to them.”

There has been much lamentation lately by the political and intellectual establishment, right and left, about the dangers of populism and nationalism. As ideologies or “isms,” here and in Europe, these movements have their problems.

But there is a more commonsense way of understanding the recent popular uprising that President Trump helped create and champion. If this electoral uprising is nationalist, it’s in favor of a nation rooted in the equal protection of equal natural rights. And if populist, it’s in favor of rule by the people, through duly elected constitutional officers, rather than elite rule by unelected bureaucrats.

This commonsense understanding is the banner under which the president chose to march during his inaugural State of the Union.

That kind of nationalism and that kind of populism should warm the hearts of all American patriots. And to the extent this administration pursues those broad goals in its second year, as it often tried to do in its first, it ought to consolidate and expand its constitutional majorities and continue to implement its agenda.

Ryan P. Williams is president of The Claremont Institute.