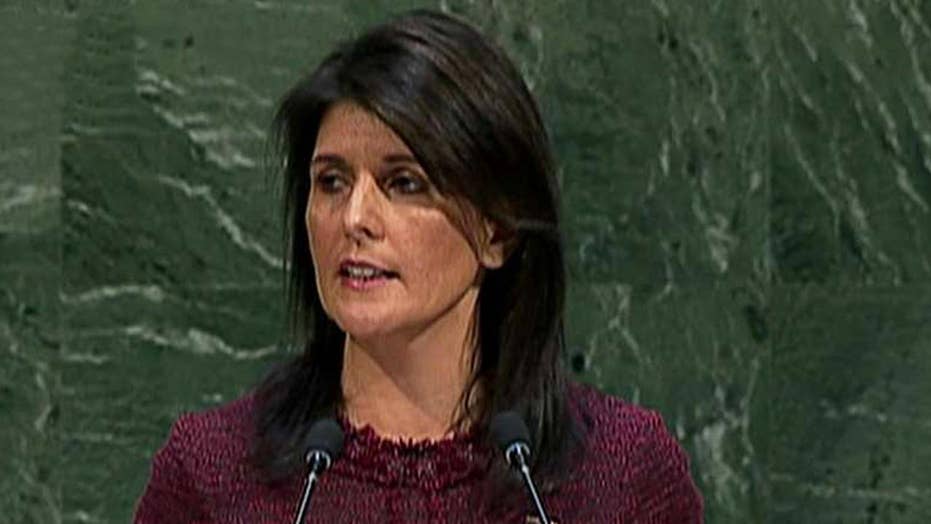 Haley: 'The US will remember this day'

The United Nations heads into 2018 with its reputation intact as a hopelessly biased anti-American and anti-Israel debating society that passes resolution after resolution condemning these two great democracies. At the same time, the U.N. General Assembly regularly turns a blind eye to human rights violations, aggression against neighbors and murders of dissidents by dictatorships around the world.

A highlight of President Trump’s foreign policy in 2017 was his decision to call out this absurd double standard. And America’s ambassador to the U.N., Nikki Haley, has ably supported the president’s position.

The latest example of U.N. members ganging up on America and Israel was the General Assembly’s overwhelming approval of a resolution condemning America for recognizing the obvious fact that Jerusalem is Israel’s capital.

What more irrelevant actions will we see at the United Nations in 2018? Hashtag wars tweet-launched from the General Assembly lounge?

The General Assembly condemnation of the United States because of President Trump’s action on Jerusalem actually backfired and turned into a form of flattery for our country. This is because the Assembly canceled its early Christmas break to meet in emergency session on the Jerusalem issue. This showed actions by the U.S. have weight beyond those of other nations.

What drove the Assembly’s condemnation? The White House had merely noted that President Trump intended to deliver on a campaign promise regarding the Jerusalem Embassy Act passed by big bipartisan majorities Congress in 1995. The act states: "Jerusalem should be recognized as the capital of the State of Israel; and the United States Embassy in Israel should be established in Jerusalem no later than 31 May 1999.” But that still hasn’t happened.

The General Assembly condemnation of the United States because of President Trump’s action on Jerusalem actually backfired and turned into a form of flattery for our country.

The Assembly emergency session on the Jerusalem issue was only the 11th such session during the U.N.’s 73-year history. Seven of these sessions dealt with the Middle East. “Lesser” emergencies not making the grade included the fall of the Berlin Wall, the Soviet Union’s demise, the growth of terrorism after the Sept. 11 attacks in the United States, Syrian atrocities against humanity, Ebola alarms, and North Korean abuses and provocations.

But Israel bashers at the Assembly were all too happy to pull together a script, line up before the cameras, and rise to the “emergency” of providing needy holiday partygoers a new “tsk-tsk Trump” icebreaker.

How else did the condemnation flatter the United States?  The Assembly reserved all its attention for the U.S. alone.

Yet Russia took an equally provocative action earlier in the year when it announced it recognized the western portion of Jerusalem as the capital of Israel. This goes to confirm that Russia matters far less in the geopolitical calculus; President Vladimir Putin must feel the failure.

Neither did Turkey merit the Assembly’s attention for its ongoing recognition of Jerusalem (at least the eastern portion) as the capital of Palestine, which is not even an independent country. That’s arguably as prejudicial and inciting a policy as any.

The Assembly’s condemnation not only flattered the United States, but flattered President Trump himself. The Assembly never gave such targeted attention to Presidents Clinton, George W. Bush and Obama – even though each similarly pledged to recognize Jerusalem as Israel’s capital at some point, but never actually did so.

The Assembly action backfired because it’s anti-American and anti-Israel bashing reflected more poorly on the United Nations than on the U.S. or Israel. Since the creation of the U.N., the Assembly has performed well when it works above the fray – that is, when pursuing agreements on global norms of behavior for peace and security, social and economic prosperity, and human rights.

To maintain that transnational spirit, the Assembly has avoided showcasing state-on-state body-slamming. Otherwise, its cathedral-like aura would lower itself to the level of a pro-wrestling cage match. But every so often its membership majority gives in to that spectacle – particularly when Israel is involved.

If such cage matches are now to be held regularly at the U.N., skirmishing countries will game and exploit the Assembly for their own quick stake-raising and inexpensive global publicity, further weakening the Assembly’s legitimacy and standing.

In the end, the General Assembly’s condemnation did succeed in one sense. It proved the United Nations deserves the sharp criticism it often gets from Washington and increasingly from others.

Hugh Dugan advised eleven US Ambassador to the UN while serving as a US Delegate there from 1989 to 2015. Currently he is Sharkey Distinguished Visiting Scholar and Adjunct Professor at Seton Hall University’s School of Diplomacy and International Relations. Views or opinions expressed are solely those of the author and do not necessarily represent those of any other entity.