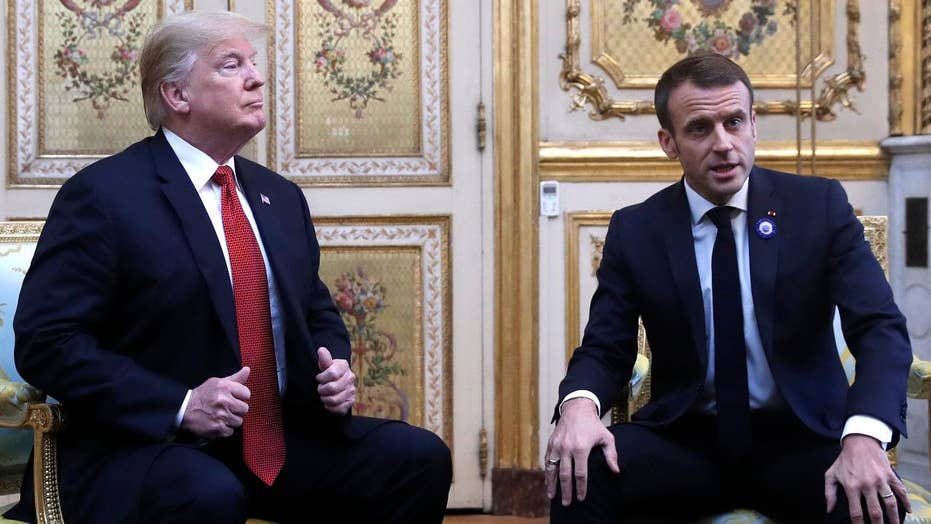 President Trump was right to tweet an outraged response Saturday to remarks by French President Emmanuel Macron after Macron said in a radio interview that France and Europe need an army to defend against America, Russia and China.

By saying that “we have to protect ourselves with respect to China, Russia and even the United States of America,” Macron naively paints America as a potential enemy. In so doing, he ignores the hundreds of thousands of American lives sacrificed on French and European soil to save the free world during World War I and World War II.

Landing in France Saturday to join leaders of other nations in ceremonies commemorating the 100th anniversary of the end of World War I, President Trump tweeted: “President Macron of France has just suggested that Europe build its own military in order to protect itself from the U.S., China and Russia. Very insulting, but perhaps Europe should first pay its fair share of NATO, which the U.S. subsidizes greatly!”

Macron could not have levied a greater insult at America and its veterans on this 100th anniversary of the armistice signed between the Allies and Germany on the 11th hour of the 11th day of the 11th month in 1918 to end World War I and, ironically, save Europe.

The French and U.S. presidents met Saturday and Macron tried to backpedal from his earlier comments, saying he had been misunderstood, and that what he really meant was the Europeans needed to spend more on their own defense and be less dependent on America to defend them, as President Trump has called on them to do.

Nonetheless, Macron’s diplomatic moonwalking does not alleviate his insult to American veterans.

Macron should be more appreciative of what America has done for France and for all of Europe in the past 100 years. He should take some quiet time for himself and walk among one of the 11 cemeteries maintained by the American Battle Monuments Commission in France where over 60,000 Americans rest eternally, their headstones standing guard against further invasion.

As many have pointed out before, without the United States the people of France would all be speaking German today.

To further underscore Macron’s misunderstanding of his country’s security environment, his remarks about building a European defense force came in response to President Trump’s opening gambit to remove the United States from the 1987 Intermediate Range Nuclear Forces treaty with Russia – a treaty that Russia has already violated and obviated.

Macron would kneel before the Russian nuclear threat, unable to understand the overarching security implications of encouraging American withdrawal from collective security in Europe.

Of course, America will never withdraw from protecting Europe, chiefly because Europe’s economy is central to the health of the American and world economies.

The strategy states: “A strong and free Europe is of vital importance to the United States. We are bound together by our shared commitment to the principles of democracy, individual liberty, and the rule of law. Together, we rebuilt Western Europe after World War II and created institutions that produced stability and wealth on both sides of the Atlantic. Today, Europe is one of the most prosperous regions in the world and our most significant trading partner.”

Further, the strategy identifies Russian subversive actions intended to drive a wedge between the United States and Europe and says: “Russia is using subversive measures to weaken the credibility of America’s commitment to Europe, undermine transatlantic unity, and weaken European institutions and governments.”

In other words, Macron is playing into the hands of the enemy. He fails to recognize both the sacrifice and the commitment of the United States to European security. Macron’s ignorance is outpaced, though, by his disrespect.

Calling America a potential enemy on the eve of the 100th anniversary of the end of the Great War is an unmitigated insult to American veterans everywhere.

Instead of spitting in our soup, Macron has shamefully spit on the graves of the Americans who saved his country and on Americans who defend it today.