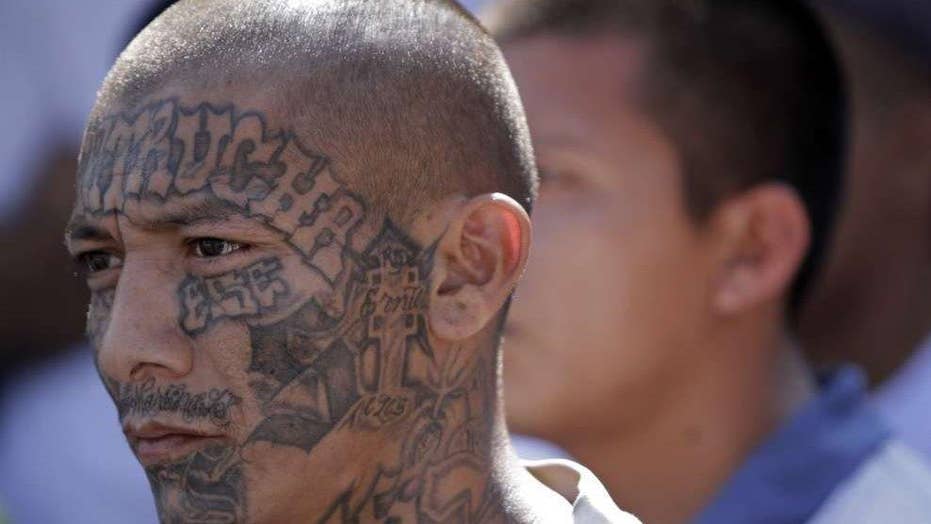 The challenges of reining in MS-13

A look back at Tucker's report from Central America on the notorious gang, from the roots of their violence, to the challenges of preventing their migration into the US to Mexico's role #Tucker

The president ripped into the violent MS-13 gang last week, and talked about crime and law enforcement and what his administration is doing about it. He had hundreds of law enforcement officers in the audience, and their applause made it clear that they were pleased the new President had replaced the old one and that the old one’s anti-police animus was gone from public life, that the war on police was over.

Trump talked about what his administration is doing to eradicate the MS-13 gang and the violence and mayhem it is spreading, particularly on Long Island, where he made the speech. He talked about the 17 young people murdered by MS-13 gang members on Long Island in the past 18 months. He went on to discuss the 42 minors in the DC region who entered the US unaccompanied in the last years of the Obama Administration, who are now implicated in MS-13-related violence, including 19 of those minors charged in murder or attempted murder.

And he talked about what his Administration is doing to slow the flow of illegal drugs coming in from Mexico, about human trafficking on our Southern border, and about stemming the flow of illegals coming into the country. He explained how his administration cuts off trade with countries that refuse to take deportees back – mostly criminals – and how quickly cutting off trade makes those countries change their policy.

He announced that ICE officers recently conducted the largest crackdown of alien criminal gangs in history, and how in just six weeks they arrested nearly 1400 suspects and seized more than 200 illegal firearms and nearly 600 pounds of narcotics.

He spoke about sanctuary cities that defy federal law and instead turn dangerous criminals back onto the streets instead of detaining them, as requested by the federal government, and what the government is doing to end the practice. And he spoke about the wall on the US-Mexican border, and how Congress just appropriated the first $1.6 billion to start construction.

Most importantly, he spoke about all that the federal government is now doing to support the police, to restore the American concept of the rule of law to criminal justice and law enforcement. All in all, Trump made a very pro-law enforcement speech – the kind of speech that never came from President Obama, and the kind of speech that Hillary Clinton, had she won the election, could never have brought herself to make.

But you wouldn’t know much about that speech if you read the news. Try this: Google “Trump Law Enforcement Speech” and see what comes up. “Trump Endorses Police Brutality,” or “Trump Just Delivered the Most Chilling Speech of his Presidency,” or how about “Trump calls for more Police Brutality?” No headlines about the surging murder rate in Los Angeles and Chicago, about knifings and slashing of children by MS-13 gang members, nothing about the opioid epidemic and the drug dealers and smugglers responsible. You would think all he did was to urge on police brutality.

And why? Because Trump ad libbed a quip about the use of force during an arrest. His staff said it was a joke, and in today’s climate that’s always dangerous. After describing the way MS-13 gang members slash children to death, he said, “you see these thugs being thrown into the back of a paddy wagon — you just see them thrown in, rough — I said, please don’t be too nice. Like when you guys put somebody in the car and you’re protecting their head, you know, the way you put their hand over? Like, don’t hit their head and they’ve just killed somebody — don’t hit their head. I said, you can take the hand away, okay?”

The police are obviously authorized to use force when needed, and every police department has strict rules on how force can be used. When it is abused there is a whole body of law that comes into play, including civil and criminal charges against the offending officer. Many suspects complain that police used excessive force, and most such complaints are dismissed after careful review. But the anti-police voices in the media begin with an irrebuttable presumption that the police are out-of-control, bigoted racists, and that’s made our streets less safe.

But of course I’m forgetting the worst thing Trump said. He talked about putting criminals in a “paddy wagon.” How shocking! A slur against the Irish.

Mr. Regnery is Chairman of the Law Enforcement Legal Defense Fund and Chairman of the Intercollegiate Studies Institute. He served in the US Justice Department during the Reagan years.