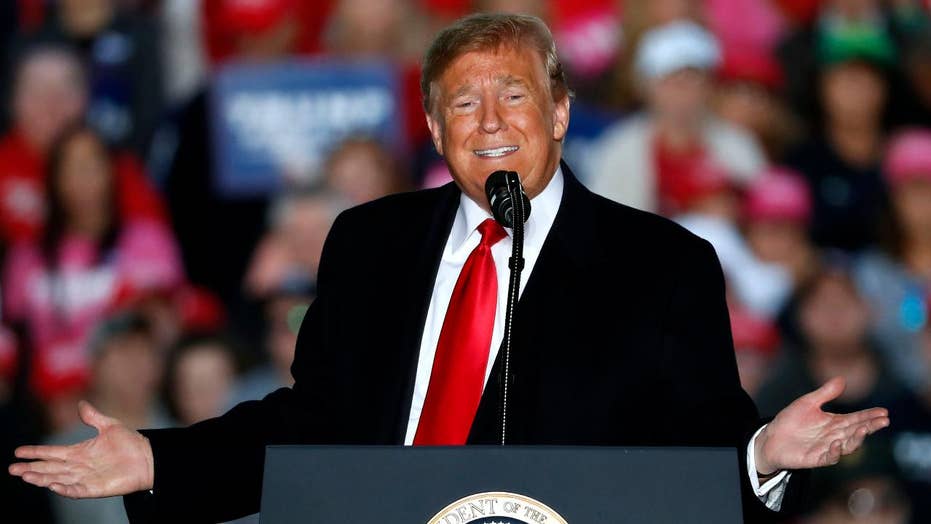 Trump kicks off campaign blitz ahead of midterms

President Trump returns to the campaign trail with rallies in eight states before Election Day, including several states that he won in 2016 where Democrats are fighting to hold onto Senate seats.

Many American families – busy getting into their autumn routines of juggling work, school and extra-curricular activities – are just now beginning to focus on who to vote for in the midterm elections Tuesday.

The central question people have to consider is this: Are you better off today than you were two years ago?

A lot has happened in the two years since the American people voted to make Donald Trump our president.

President Trump, the ultimate political outsider, has cemented his reputation as a leader who makes promises and keeps promises.

Despite unprecedented obstruction by Democrats, President Trump and Republicans in Congress have spent the past two years working to enact the president’s America First agenda.

First and foremost, the president's historic tax cut and deregulation program have kicked our economy into overdrive. Millions of jobs have been created. Unemployment is at its lowest level since 1969.

Yet Democrats voted in unison to oppose the Trump policies that led to all this good economic news.

The Senate has confirmed Neil Gorsuch and Brett Kavanaugh to serve as justices on the Supreme Court – yet another enormous accomplishment for the president. The two justices will be staunch defenders of the Constitution, safeguarding our liberties on our nation’s highest court for decades to come.

North Korea is no longer testing missiles and nuclear bombs, thanks to the president's foreign policy of peace through strength.

And President Trump has moved our embassy in Israel to Jerusalem, something that many presidents promised, but never did.

Despite complete Democratic resistance on health-care reform and tough border security measures, the president has managed to get the awful individual mandate scrapped and border wall construction underway.

Because of this outstanding record, here we are less than a week before the midterm elections and Republicans are squarely in the game.

In Nevada, eye-grabbing headlines like "Unemployment rates drop across Nevada last month," appear to be causing people to move toward re-electing Heller and making Republican Adam Laxalt the next governor.

Rep. Kyrsten Sinema, the Democratic Senate candidate in Arizona, has been exposed as a left-wing radical.

If Republicans manage to hold onto the seats in Arizona and Nevada, they could be looking at picking up three or four seats in the Senate.

In Indiana, the latest polling shows that Republican businessman Mike Braun is running ahead of Democratic Sen. Joe Donnelly by a margin of 46 to 43 percent.

Similarly, conservative Republican Senate candidates Patrick Morrisey in West Virginia, Matt Rosendale in Montana and Gov.Rick Scott in Florida are all in the hunt in their races in states that President Trump carried.

While the outlook in the U.S. House is far more uncertain, a consensus is emerging among those closing tracking the races that a blue wave may not be coming after all.

This decline in optimism among Democrats may be due to reality setting in among American voters. Men and women across our country are concerned about the liberal agenda of tax hikes, open borders, blowing up Medicare, and trying to impeach any conservative in high office who they don’t like.

What the Kavanaugh Supreme Court confirmation hearing in the Senate and the pending caravan invasion of Central American migrants make clear is that the left is inviting chaos to America. Hardworking American taxpayers are wary of it.

The massive mob of migrants currently working their way through Mexico hell-bent on entering America illegally confirms that serious border security laws must be passed by Congress without delay.

These caravans will become the rule – not the exception – if Rep. Nancy Pelosi, D-Calif., becomes speaker of the House again.

I wouldn’t be surprised if the majority in the House of Representatives is decided by five to 10 seats either way. House races where strong Republican women are running – like Barbara Comstock in Virginia, Claudia Tenney in New York, Maria Salazar in Florida, Lena Epstein in Michigan, Wendy Rogers in Arizona and Young Kim in California – could decide who controls the House in 2019.

A Media Research Center report found that 92 percent of the mainstream media's news coverage of President Trump has been negative. When you consider the onslaught of fake news that this president has had to endure for the past two years, the fact that the House is still in play for Republicans a week before the election is an accomplishment in itself.

When it comes to voting for your representative in Congress, the American people need to consider the past two years.

It's clear that President Trump's foreign and domestic policies have paved the way for more security and prosperity for all Americans. We can't afford to go back.

A vote for a Pelosi majority in Congress is a vote for crippling gridlock in government and a continuation of the partisan and divisive investigations into the 2016 election. I hope that gives Americans pause.

A vote to keep the levers of government out of the hands of the leftwing mob is a vote for more economic prosperity, common sense border security and a chance to finally move past the 2016 election and start to heal – and unit – as one nation with shared hopes and dreams for a better future.