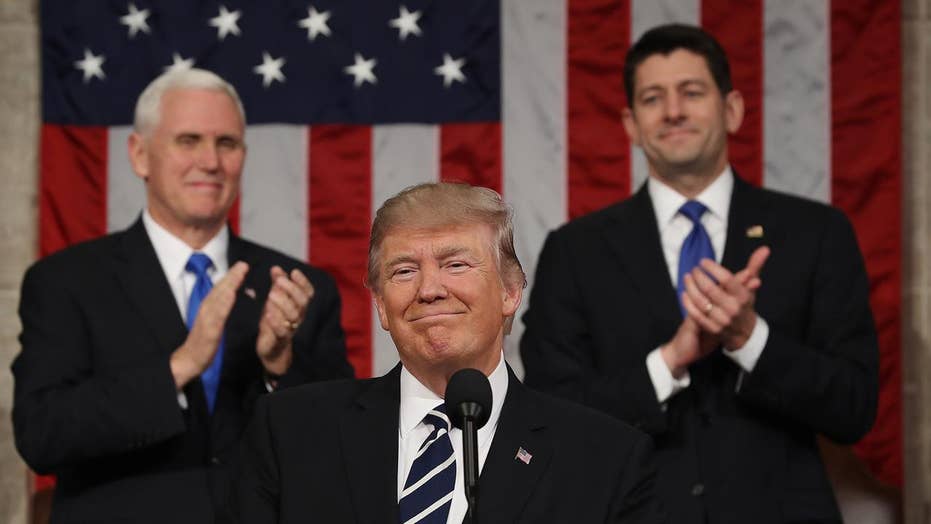 President Donald Trump continues to shock the media -- this time in incredibly positive ways. Tuesday night his speech to a joint session of Congress caused many in the media to sing his praises describing it as “extraordinary” and “presidential.”

The most amazing moment of the night came when Trump honored Carryn Owens, the widow of slain Navy SEAL William “Ryan” Owens. Her reaction will be the lasting image of the speech as she put her hands together and looked to heaven, crying. It’s a picture that should be on every newspaper front page Wednesday. The bipartisan applause went on and on, with Trump finally noting, off script, “And Ryan is looking down right now, you know that, and he is very happy because I think he just broke a record.”

Richard Engel, NBC’s chief foreign correspondent, has been extremely critical of Trump. But he was positive about that emotional moment and defended the now-controversial raid. He said on Twitter, “Standing ovation for fallen seal from yemen raid.  Im told the raid did gather useful intel, had been in works before trump took office.”

That moment resonated across party lines. CNN replayed the entire clip with its epic applause for the family and the fallen hero. Anchor Anderson Cooper called it a “truly extraordinary moment.” Even CNN commentator and massive Trump opponent Van Jones was moved. “He became president of the United States in that moment. Period,” said a somber and serious Jones. “That was one of the most extraordinary moments you have ever seen in American politics. Period,” he added.

That was a common reaction for most outlets not called The Washington Post.

Time Washington bureau chief Michael Scherer gave it similar praise. “This speech is the best sign yet that Donald Trump can learn how to use the power of his office.”

The Washington Post was having none of it. Its staff comments read more like The Huffington Post, with several prominent writers attacking Trump and his speech. Post editorial writer Jackson Diehl called the immigration section a “xenophobic rant." National political reporter Robert Costa continued the negative theme. “That's what makes the speech somewhat jarring. A bleak, populist Bannon vision laced with elements of Ivanka-ism on social policy.”

Staff writer Joe Heim showed his colors (black, white and red) and linked Trump to the Nazis, commenting about a science-fiction program where the Nazis won WWII: “I didn't even know the Man in the High Castle was on cable.” Either that was an astonishingly biased comment or boss Jeff Bezos simply has news staff embedding ads in their Twitter accounts now, since the program is produced by Amazon, which Bezos also owns.

Little-known political reporter Abby D. Phillip snarked about the congressional response. “Unknown member of Congress to Trump: ‘I thought it was Reagan-esque.’ Trump getting lots of ‘You knocked it out of the park’ from members.’”

Post media reporter Erik Wemple‏ joked about Trump quitting Twitter and mocked Fox for saying it was a highlight of the presidency: “On Fox News, Shep Smith says this is the highlight of Trump presidency so far. Right, way better than, say, the Nordstrom tweet.”

Oddly, one exception was liberal Chris Cillizza‏, who writes for the Washington Post’s The Fix. He went from tweeting a GIF of Obama, saying, “Missing this guy tonight....” to a reluctant admission that Trump had done well. “Trump is never going to be a brilliant orator but this speech is the best I have seen him [give].”

Despite the Post's reaction, Trump only slammed the media once. Thin-skinned CNN media critic Brian Stelter‏ was quick to note it, retweeting Mic’s post, “There it is -- Trump's only scripted mention of media tonight.”

Trump was complaining (correctly) about how news organizations often ignore or downplay crimes by illegal immigrants. “We are providing a voice to those who have been ignored by our media, and silenced by special interests,” he told members of Congress.

That complaint resulted in some of his strongest criticism from others in the press. Engel called out the president for his “his anti-immigration agenda, same one gaining strength in Europe.”

Conservatives were, of course, upbeat about the speech, even though parts weren’t especially conservative. New York Post columnist Salena Zito summed it up: “.@POTUS 'Seize the moment' speech was solid, strong aspirational.”

The evening didn’t start out that well for Trump.

Chief content officer for IJR Benny Johnson commented how Democrats had rejected shaking hands with the president. “I covered 5 Obama State of the Union speeches. Always, there was GOP members there to shake his hand. Dems shunning Trump is NOT normal,” he wrote. Johnson added, “about one fifth of Dem members did not even stand up, much less applaud.” At one point, only MSNBC’s Joe Scarborough was seen clapping on the Democratic side of aisle. (He’s a former Republican congressman.) West Virginia Democrat Sen. Joe Manchin was also a periodic exception.

CNN’s chief political correspondent Dana Bash told viewers that many Democrat women would be wearing white tonight -- “white [is] the color of the suffragette movement.” How times change. Just a few months ago, Philadelphia Inquirer fashion critic Elizabeth Wellington said just the opposite about white. She attacked Melania Trump for giving the terrifying message, “that in the G.O.P. white is always right.”

CNN’s Jones, famous for claiming the election was a “whitelash” had begun the evening on a very negative note, which made his later comments more significant. “You still have a lot of people who are afraid.” Fellow CNN liberal Sally Kohn reacted during the speech similarly. “Congratulations, Mr. Trump, kids all across America going to bed tonight terrified their families will be ripped apart by your deportations!” she tweeted.

The attacks on Trump have begun to resemble a game of Trivial Pursuit. Washington Post foodie Tom Sietsema criticized Trump’s steak choice (well done with ketchup) is an overdone bit of media hype Monday, calling his choice “imitation vanilla.” The media followed that silliness by going to the dogs and complaining the president will be the first in 100 years without one.

So-called journalists topped that off freaking out when counselor to the president Kellyanne Conway dared to kneel on an oval office couch. Rather than focus on the fact Trump was meeting with leaders of historic black colleges and universities, they went couch surfing. The Times whined as only the Times can, complaining about how this “seemed like the latest flouting of protocol,” ignoring the countless times presidents have put their feet on the Resolute desk.

Few cared. Few watched. All eyes and ears were for Trump.