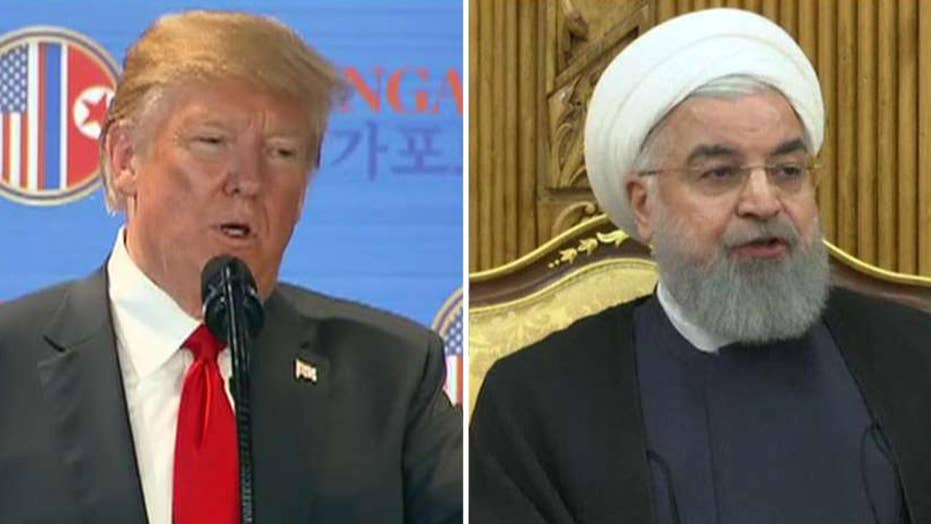 President Theodore Roosevelt said that in foreign policy he followed an old West African proverb: “Speak softly and carry a big stick – you will go far.” President Trump would be wise to do that as well. He should tweet a bit more softly, make fewer threats and let his actions speak louder than his words to other nations.

President Trump’s actions – whether arming Ukraine, canceling the terrible nuclear deal with Iran, bombing Syria or slapping tariffs on China – are all very big sticks. By his actions, the president has proven to be a strong, wise and effective leader on the foreign policy front.

In addition, the leader of every nation on Earth obviously knows that President Trump is the commander-in-chief of the world’s strongest military and controls the biggest nuclear arsenal. So just as a 7-foot basketball player need not remind everyone that he’s tall, President Trump need not remind everyone that he controls more military power than any person on the planet.

And much as he wants to counterpunch and fire rhetorical missiles at any other leader who dares threaten the United States or make negative comments about him, President Trump has no need to publicly threaten and insult other nations. When he does, he runs the risk of provoking another country to take action against us or our allies – possibly involving real missiles and other weapons of war.

Last week the president decided to speak loudly instead of softly when he responded to an apparent threat from Iranian President Hassan Rouhani that “war with Iran would be the mother of all wars.” This seemed to enrage President Trump, who lashed out on Twitter in all capital letters, declaring:

“To Iranian President Rouhani: NEVER, EVER THREATEN THE UNITED STATES AGAIN OR YOU WILL SUFFER CONSEQUENCES THE LIKES OF WHICH FEW THROUGHOUT HISTORY HAVE EVER SUFFERED BEFORE. WE ARE NO LONGER A COUNTRY THAT WILL STAND FOR YOUR DEMENTED WORDS OF VIOLENCE & DEATH. BE CAUTIOUS!”

I applaud President Trump and his use of what can only be described as his own 21st century bully pulpit of 53 million Twitter followers around the world. But he should consider a somewhat more toned-down approach.

This former White House staffer made his advice quite clear: “The Trump administration’s rhetoric will only create problems down the road."

While his shoot-from-the-hip style keeps him in the center of the media spotlight almost 24/7 and helps him rally his base to his cause, the president’s over-the-top rhetoric could backfire, even having the opposite effect of what he is hoping to achieve. If he just simply pointed out examples of his foreign policy successes and his enemy’s bad intentions and behavior, he might even see more long-lasting and sustainable results.

For example, consider where denuclearization negotiations are now with North Korea. The regime of dictator Kim Jong Un seems to be making some small but important concessions. But President Trump’s threatening tweet to Iran could very well scare Kim away from the negotiating table and harden his commitment to never giving up his nuclear weapons.

This is because Kim views his small nuclear arsenal as an insurance policy against a U.S. military attack that could overthrow his government and end with his death. Kim shows no signs of wanting to lose power or die, so this insurance policy is very important for him.

The North Korean leader sees that Iran – which has agreed not to build nuclear weapons – gets a threatening tweet from President Trump just because the president of the Islamic Republic put out a statement our president didn’t like.

Kim also sees that Libyan leader Muammar Qaddafi was overthrown and brutally killed after giving up his nation’s nuclear weapons development program. And the North Korean leader sees that Ukraine gave up Soviet nuclear weapons stored there after the Soviet Union broke up – only to have Russian troops later seize Crimea from the nation and support rebels in Eastern Ukraine.

Yet nuclear-armed North Korea gets a summit with the U.S., and is now being treated respectfully by President Trump. And Kim got Trump to agree to call off joint U.S.-South Korea military exercises.

Kim is not stupid. He must see the obvious pattern – keep your nukes and be safe from U.S. attack. Get rid of your nukes and face a possible attack, ouster from power and death. He knows that no nuclear-armed nation faces a risk of being invaded by American forces.

The lesson is clear: The more threats President Trump makes against Iran or any other country, the more likely Kim must worry that he and his nation could be threatened if he gives up his nuclear weapons.

In fact, if Trump continues making threats against Iran, he could push Iran and North Korea closer together – something our own intelligence agencies are quite concerned about.

Speaking to me on background, two current U.S. intelligence officials expressed their concern that North Korea could very well sell Iran some of its most advanced military technology. This would be nothing new, as both nations have a long-standing arms sales relationship that goes back decades.

“We know for a fact that North Korea will sell almost any of its military hardware if the price is right – and Iran has paid that price time and time again,” a senior U.S. intelligence official told me. “In the past, there is ample evidence – even in the public domain – that proves North Korea will sell conventional weapons, all different types of missile technology, and even nuclear tech and expertise if you have the funds to pay for it.”

This former White House staffer made his advice quite clear: “The Trump administration’s rhetoric will only create problems down the road. Better to push back with things like sanctions, building alliances with nations who have similar interests and even forming new partnerships. Twitter wars might seem the hot trend of the day, but they only enrage our enemies – they don’t do much else.”

Clearly, President Trump’s uncompromising approach – putting America first and ensuring our foes know we will never back down in the face of any threat – is part of the reason why 60 million citizens voted for him, casting aside the weak policies of President Obama. But President Trump needs to tone down his tweets and his statements and let his tough policies do at least some of the talking.

Follow Teddy Roosevelt’s wise words, Mr. President, and tweet softly. You have a bigger nuclear stick with greater power than he could ever imagine.