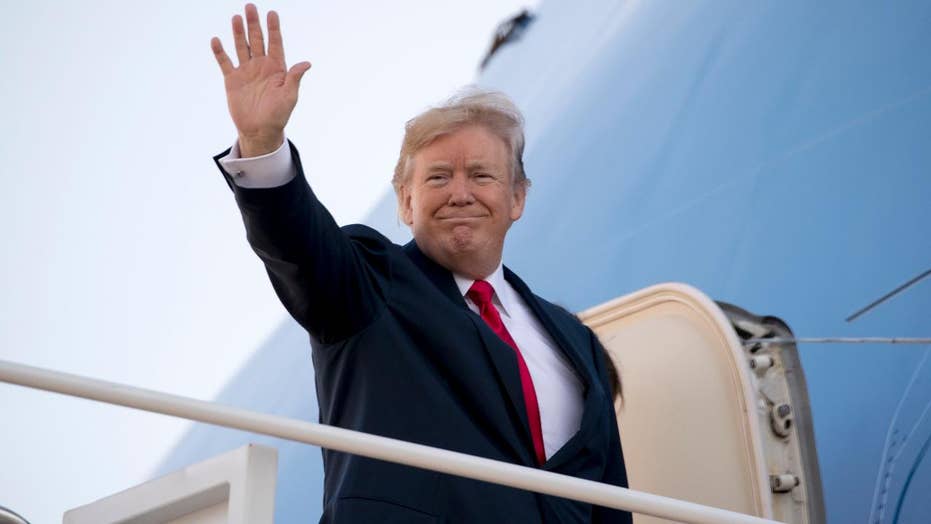 Trump to mainly focus on North Korea during Asia visit

The president will also be pushing China to trade more fairly with the U.S. and to stop militarizing the South China Sea; Kristen Fisher reports for 'Special Report.'

When President Trump visits Beijing on his Asian trip now in progress, China is expected to roll out the red carpet. But Chinese leaders are spooked. President Trump is the first American president to sanction a Chinese bank for helping North Korea evade U.S. and United Nations economic sanctions.

Chinese President Xi Jinping will no doubt flatter his American guest, hoping that President Trump prefers the image of a successful summit to a confrontation over sanctions. But President Trump should not fall for it.

With North Korea on the brink of being able to strike the U.S. with a nuclear missile, President Trump must increase pressure on Pyongyang and its enablers, especially Beijing.

China accounts for an estimated 90 percent of North Korean trade, giving it significant economic leverage. And according to the U.N., China imported $182 million of North Korean coal in August and September this year, despite its February pledge to stop the practice.

If Beijing cannot implement its own coal restriction, we should not trust that it will act against its own citizens who help North Korea evade economic sanctions. President Trump should tell Xi as much.

While the two leaders should project a cordial relationship in public, President Trump should warn Xi in private that Washington will move forward with robust sanctions targeting Chinese companies and banks that facilitate North Korea’s evasion of sanctions.

Chinese entities that strengthen North Korea’s economy by getting around sanctions undermine the American policy of financially isolating North Korea. That isolation is key to gaining leverage as a means to prevent a military conflict.

These actions are a clear warning shot to Beijing that Washington is widely expected to target additional Chinese nationals and banks that play a key role in these illegal schemes.

The Trump administration should take a page from the Iran sanctions playbook and issue fines against Chinese banks for failing to identify North Korean transactions – similar to the $12 billion in fines issued from 2012 to 2015 against European banks for Iran sanctions violations.

Abe declared North Korea as one of Japan’s two national crises. And in a sign that Washington fully backs Abe’s North Korea policy, President Trump will meet with families of Japanese citizens abducted by North Korea. At minimum, the visit will shine a spotlight on Pyongyang’s abhorrent human rights record.

President Trump’s itinerary also includes South Korea. His relationship with President Moon Jae-In has not always been an easy one, because of differences in whether to confront or engage the North Korean regime of dictator Kim Jong Un. However, North Korea’s provocations have drawn the U.S. and South Korea closer.

If President Trump plays his cards right, he will discourage South Korea from drawing closer to Beijing. China already agreed to suspend its sanctions against South Korea in exchange for a commitment that Seoul will not deploy additional THAAD launchers, participate in a U.S. regional missile defense, or enter into a trilateral defense alliance with Japan. The China-South Korea détente could erode American leverage with Beijing.

More broadly, President Trump must seize the opportunity on this trip to build a multilateral coalition outside the U.N. of likeminded countries (South Korea, Japan, Australia, Britain, France and Germany) that commits to increasing pressure on North Korea.

This group of nations should focus on identifying additional networks ripe for coordinated sanctions actions. It should also target North Korean shipping by declaring that all vessels linked to North Korea can be inspected under U.N. and international law.

Amidst all of this, President Trump should be prepared for new North Korean missile tests during his time in the region. Kim Jong Un wants to remain in the spotlight.

But no matter what Pyongyang launches, Trump’s message must be consistent: denuclearization is America’s vision for the Korean Peninsula. The United States must not accept anything less, given North Korea’s egregious history of nuclear, chemical and missile proliferation.

Anthony Ruggiero, a Senior Fellow at the Foundation for the Defense of Democracies, was the non-proliferation advisor to the U.S. delegation to the 2005 rounds of the Six-Party Talks and spent more than 17 years in the U.S. government. Follow him @_ARuggiero.