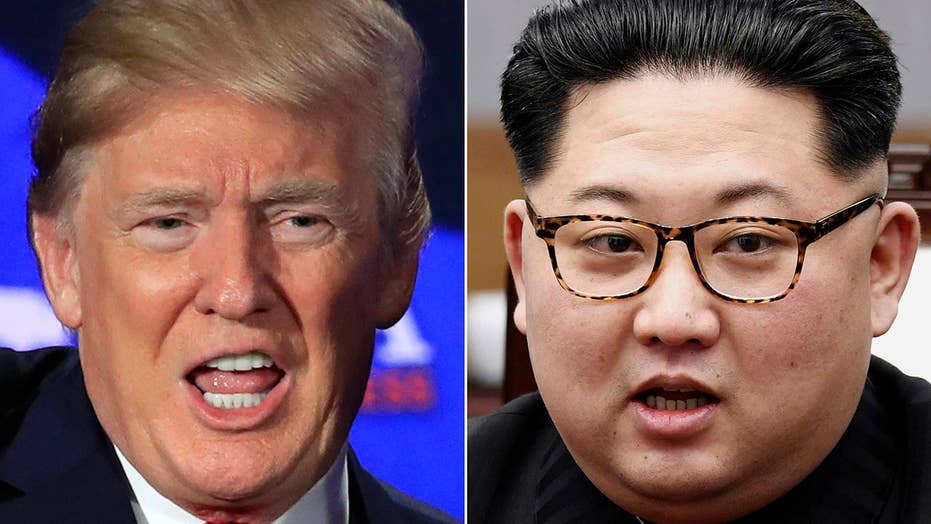 President Trump should stand firm and refuse to back down from demanding the complete and verifiable denuclearization of North Korea, in the face of the communist nation’s new threats to cancel his planned June 12 summit with dictator Kim Jong Un.

Any sign of weakness President Trump shows – as previous U.S. presidents have shown – will only encourage Kim to dig in his heels and demand more and more concessions.

In the face of the North’s flip-flop Tuesday – from welcoming a summit to casting doubt on one and resuming hostile statements about America – President Trump should convey a firm message loud and clear to the Kim regime: There will be no summit unless the North is willing to agree to some sort of concrete timeframe to give up its atomic arsenal – with intrusive inspections guaranteeing that goal.

If Kim refuses to explicitly agree to this, President Trump must have the courage to walk away from the summit, depriving Kim of a historic photo op the dictator would no doubt cherish.

Walking away would also deprive President Trump of possibly winning the Nobel Peace Prize – but the prize would be meaningless if it were awarded for a sham agreement with Kim not worth the paper it was written on.

President Trump need not demand full North Korean denuclearization at once. He could easily offer a step-by-step approach.

For example, if North Korea gives up an agreed number of nuclear weapons or other weapons of mass destruction, America could agree to drop selected sanctions – showing that trust can be built and that both sides can benefit by working together.

If this cannot be achieved and North Korea wants to put off getting rid of its nukes to some undefined point in the future – pocketing concessions before it does anything or very little – President Trump should give a one-word answer: no.

When it comes to the tortured history of attempted – and failed – negotiations between America and North Korea, one thing is clear: When things get tough, North Korea almost always walks away.

History is repeating itself. Just a decade ago, Pyongyang destroyed a cooling tower associated with its nuclear program in a move that was more for show then substance.

The world had high hopes that North Korea would next allow international inspectors in to examine its nuclear facilities. But that never happened. The North balked at the request, only to walk away from the bargaining table, driving tensions on the Korean Peninsula back to the boiling point.

And now – here they go again.

On Tuesday, the Wall Street Journal reported that “North Korea has begun to remove buildings from around its nuclear-test site in a step toward dismantling the facility, new satellite imagery shows, as the regime seeks to build trust with the U.S. after declaring its nuclear arsenal complete.”

Then just hours later the North threatened to cancel the summit.

This is all part of the standard North Korean diplomatic playbook. We should expect lies, threats, gestures of good will and changing positions from the North as part of its standard operating procedure.

We must also remember that modern-day summits between nations are not affairs where world leaders walk into a room with unresolved differences and do real bargaining to hash out their issues at the table – this is not the 1600s.

A summit is the last step in reaching agreements, not the first.

Over the last few weeks or maybe months, Washington and Pyongyang have been negotiating the agenda and deliverables of what a Kim-Trump summit would achieve. This is done to ensure both sides come out as being perceived as winners, but also to ensure that the summit is not a failure, with both sides having egg on their faces and looking foolish.

A failed summit would be worse than no summit at all – putting pressure on both sides to take more aggressive actions that could lead to a military conflict.

What the Trump administration wants out of the summit is clear: a defined process and timetable spelling out how North Korea would give up its nuclear weapons and how this would be verified.

For North Korea, possible goals would be to see the lifting of the maximum pressure campaign of international economic sanctions; a peace treaty to replace the armistice that halted the Korean War in 1953; full diplomatic recognition by the U.S. and its allies; some form of economic aid from the U.S., South Korea and other countries; and a security guarantee pledging the U.S. will not attack the North or seek to overthrow Kim.

And you can bet Pyongyang wants at least some of this upfront – maybe even all of it – before it destroys any of its nuclear arsenal.

My educated guess is that the North Koreans – sensing the Trump administration will not give them any concessions upfront – may now be balking at a summit.

It’s understandable that the North – seeking the best deal it can possibly get – sees giving up its nuclear weapons as a major concession coming at the end of years or even decades of U.S. concessions and prolonged negotiations.

President Trump would be foolish to go along with this long drawn-out process. And I don’t think he’ll let the North play him for a fool.

The Trump administration might be willing to trade concession for concession with the North for a period of a few years, but that that might not be good enough for Kim.

Anyone would be tempted to give a concession to North Korea – for example, ending the Max Thunder military exercise that the North used as an excuse to cancel talks with South Korea that were supposed to take place Wednesday. But giving in to that temptation would be a mistake.

Now is the time to show what a Trump Doctrine – peace through strength – looks like when it is tested by tyrants. That means if North Korea will not commit to a plan to denuclearize that is concrete and involves international inspections that are intrusive, it is time for the U.S. to walk away from the negotiating table.

We should remember that walking away does not mean a path to war. In electing Donald Trump as president, the American people spoke out loud and clear: no more wars of regime change that could cost the U.S. taxpayer trillions of dollars.

What walking away does mean is that we can and must, with just a small fraction of our national power, contain North Korea for years – even decades – if need be.

Kim would be taking a huge risk by forcing the U.S. to walk away from the table. His nation is impoverished, people are going hungry, and he could soon run out of foreign exchange reserves. That means national bankruptcy.

North Korea has everything to lose, as history has a 100 percent track record of always punishing tin-pot dictators who starve, subjugate and treat their own citizens as slaves. Sometimes this take years, but the dictators always lose out in the end.

Kim is at a crossroads. If he gets rid of his nukes he has a chance to transform his country. If he doesn’t, things will only get worse for his people and his regime.

President Trump should not make concessions and beg the murderous communist dictator to attend a summit. Kim is in the position of weakness and he needs wake up, accept that fact, and stop making unreasonable demands just to sit down and meet with the president of the most powerful nation on Earth.