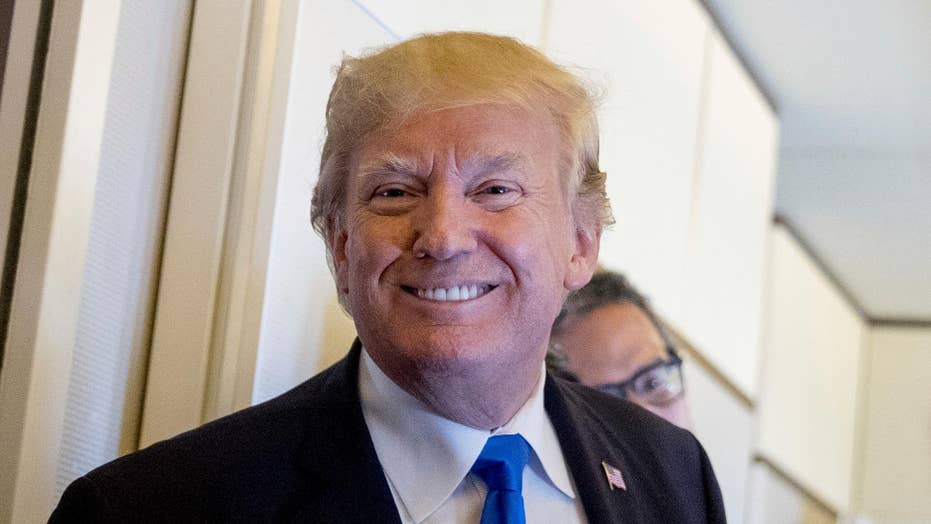 President Trump speaks to reporters on Air Force One, says he made a lot of progress on trade and security.

President Trump did us all proud on his Asia trip – at least those of us who are still prouder to be Americans rather than citizens of the world. He scored points by simply behaving like the leader of our nation and the free world.

President Obama was never comfortable in either role. He often acted like he was ashamed of the United States and gave speeches that blurred the distinction between friend and foe.

Not President Trump. He was open and forthright about his aims: he was in Asia to address North Korea’s development of nuclear weapons and long-range missiles, help right America's trade imbalance with China, and reassure our allies about American staying power.

Just in case anyone in Pyongyang or Beijing – or Hanoi or Manila for that matter – missed this message, there were three U.S. aircraft carrier battle groups operating off the Korean peninsula to reinforce its importance.

The world was never comfortable with President Obama's bowing and scraping. Other nations couldn't understand why the head of the world's only superpower would deliberately project weakness rather than strength.

At times President Obama seemed almost embarrassed by American power, as if he believed that America's free enterprise system was morally inferior to the vastly poorer but politically virtuous communist, socialist, and Islamic regimes he had to deal with. Our allies saw this behavior as, well, un-American. Our enemies were emboldened.

President Trump was honored with a particularly extravagant welcoming ceremony in Beijing. Chinese President Xi Jinping himself served as his tour guide on a visit to the Forbidden City.

Our president went on to be greeted with the same level of respect wherever he went in Asia. This was a sign of respect for the United States.

President Trump's meetings with Xi were key to the success of his trip. He understands that China, and its increasingly open and brazen flouting of international laws and agreements, is the root of all the problems that we face in Asia.

The U.S. trade deficit, for example, is in large part Made in China. Ignoring the pledges it made when joining the World Trade Organization, China continues to use non-tariff barriers to keep its own domestic markets closed while taking advantage of our own relatively open markets.

China lets American companies into its country only to milk them dry of their technology and then squeeze them out. All the while, China's state-sanctioned cybertheft of intellectual property continues apace, bleeding away America's technological advantage.

The North Korean threat is also, in large part, a Chinese creation. Dictator Kim Jong Un's half-kingdom would not even exist were it not for China's intervention in the Korean War. And it is China's ongoing trade relationship with Pyongyang that keeps Kim's nuclear and missile ambitions alive today.

Were China to actually abide by the sanctions it has agreed to impose upon its ally, President Trump knows, the North Korean economy would collapse. Instead, with China's help, North Korea has actually improved its weapons procurement capabilities in recent years.

Xi Jinping's foreign ministry may issue pro forma protests when Kim sets off a nuclear blast, but the two communist dictators remain joined at the hip by a mutual defense treaty.

Finally, there are China's destabilizing territorial claims, which have the potential to bring it into conflict with a dozen of its neighbors. The most breathtaking example of this is China's recent claim to own the entire South China Sea.

This Chinese claim not only runs roughshod over the rights of a half dozen other nations, it jeopardizes the free and open use of one of the world's most important waterways. In saner times, claiming an entire sea would be an act of war

The solution to all of these problems runs right up through the ranks of the Chinese Communist Party to Xi Jinping himself. President Trump softened up Xi by calling out China in his speech in Seoul, saying: "All responsible nations must join forces to isolate the brutal regime of North Korea. And to those nations that choose to ignore this threat or, worse still, to enable it: The weight of this crisis is on your conscience."

In their televised joint meeting in Beijing, which was supposed to be an exchange of platitudes, President Trump instead continued to hammer China on the issues of both North Korea and trade.

To fault President Trump for not solving our problems with North Korea in his two days in China, as some are doing, is ridiculous. After all, the problem has been a quarter century in the making.

But at least instead of engaging in endless "six party talks," President Trump has tagged China as the key to cutting short Kim's nuclear ambitions. That is a lot more than three previous presidents have accomplished.

Trade was an ever clearer win for Trump. He brought home the bacon from China in the form of $250 billion in new trade deals. Xi may have only approved them to curry favor with the new American president and avoid a trade war, but who cares? This keeps American factories humming and our workers employed.

In a joint appearance with Xi, President Trump continued to repeat his long-standing charge that U.S.-Chinese trade relations are “very one-sided and unfair.”

“I don’t blame China," President Trump then said, adding a new twist to the tale. "Who can blame a country that is able to take advantage of another country for the benefit of its citizens? I give China great credit.”

President Trump’s critics were quick to pan the remark, but if I were Xi Jinping it would worry me. President Trump was saying, in effect: "I'm onto your game, and your days of taking advantage of the American people are over."

Of course, the last thing China wants is for America to interject itself into the South China sea dispute. China prefers to bully its smaller neighbors into surrendering their claims one by one.

Xi Jinping must be thanking his lucky stars that, when he first rose to power in 2012, a man as weak and clueless as Barack Obama was president of the United States. Because by now, Xi has surely realized that his days of taking advantage of the United States are over.