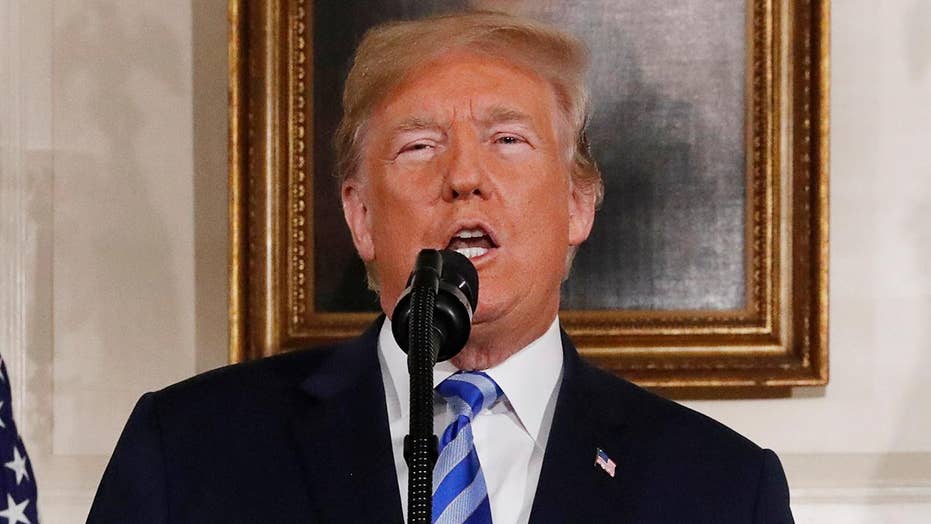 President Trump’s announcement Tuesday that the U.S. will withdraw from the Iran nuclear deal and reimpose economic sanctions in 90 days delivers a death blow to a deeply flawed agreement approved in 2015 by President Obama and representatives of other nations, and clearly opens a new phase of heightened tensions with the Islamic Republic.

This should not shock anyone who has followed news of the Middle East. Washington and Tehran have very different interests throughout the region, often putting them at odds. Total geopolitical competition – with each nation considering the other its outright enemy – has always seemed a matter of when, not if.

And President Trump’s comments Tuesday seem to suggest that might have been the game plan for his administration all along.

“This was a horrible, one-sided deal that should have never, ever been made,” President Trump said in making his announcement. “The Iran deal is defective at its core.”

If Iran’s leaders are smart, they will stop fueling the flames of war and terror all over the Middle East and will stop flirting with nuclear weapons. Iran can then become a part of the international order.

We should also consider past statements by the president that have suggested a coming showdown followed by a clash of wills. President Trump has made it clear that he has long held the Iran nuclear agreement in contempt, repeatedly calling it “insane,” an “embarrassment” and “the worst deal in history.”

In addition to worsening U.S.-Iran relations – already abysmal – President Trump’s decision could also lead to a chill in relations with the other nations that signed the agreement: China, Russia, Britain, France, Germany and the European Union. All had called on President Trump to stay in the Iran deal, which was designed to keep Iran from developing nuclear weapons, but was too weak to actually achieve that goal. China and Russia have become strong allies and trading partners with Iran.

It’s obvious why President Trump so hated the deal.

First, the agreement was always nothing more than a giant Band-Aid over Iran’s obvious nuclear weapons aspirations – freezing those ambitions for roughly 10 years, but never truly solving the problem. Instead, the deal simply kicked the nuclear can down the road.

Tehran was free to leave the deal in 2025, using what are referred to as the “sunset” provisions. Then it could simply sprint towards a nuclear bomb after leaving the accord.

Iran most certainly hid all of its past nuclear arms know-how and research to use when the deal ended – as a trove of material uncovered by Israeli intelligence that was revealed last week by Prime Minister Benjamin Netanyahu conclusively proved.

As a result, come 2025 the deal would allow Iran to get a working nuclear weapon ready for testing in roughly a year to 18 months, a retired senior Pentagon expert told me.

And second, there is an enormous problem that always made me leery of the Iran deal in the first place: nothing stops Iran from building a world-class missile arsenal – or trying to buy one.

While Iran’s nuclear aspirations were at least frozen for a decade under the deal, it faced no restrictions on having an entire decade to research, develop and test ever-more advanced missiles – missiles that could someday carry a nuclear warhead.

In the last few years, Iran has tested various new ballistic and cruise missiles, each demonstrating growing leaps in technological sophistication and accuracy.

Iran could work with North Korea to acquire, perfect and someday deploy long-range, intercontinental ballistic missiles that would take a future Iranian nuclear weapon to targets in Europe or the U.S. homeland. In fact, I suspect the two nations are already working together on this.

While it would take years of testing and perfecting, Iran has the financial resources to acquire any technology the North Korean regime of dictator Kim Jong Un has developed. And considering Pyongyang’s long track record of selling missile technology to anyone who has the cash – including Iran – that can only spell trouble.

Third, there was always a silly and extraordinarily naive assumption by President Obama and former Secretary of State John Kerry that if Iran signed the nuclear agreement the Islamic Republic would modify its behavior around the region.

Taking a leap of faith, the Obama administration embraced the view that Iran would become a responsible stakeholder and member of the international community once economic sanctions were lifted. Yeah, right.

In reality, Tehran never saw the agreement as anything more than a temporary move to get rid of crippling economic sanctions to further its own self-interest. The mullahs who rule the country with an iron fist never changed the nation’s aggressive behavior in Syria and elsewhere, and never reduced their hatred of America and Israel.

In fact, with billions of dollars in oil and natural gas revenues flowing into Iranian government coffers once sanctions were lifted under the nuclear agreement, Iran only became more aggressive – and had the cash to do so.

The good news is that none of this – no matter how dire it all sounds – makes the case for the U.S. to go to war with Iran, or mount some sort of insane effort to topple the Iranian regime. That could cost billions or even trillions of dollars and cost many Americans their lives.

President Trump and his advisers must remember that 60 million Americans voted for an “America First” foreign policy – meaning wars of choice like Iraq and Libya must be avoided at all costs.

In fact, the Trump administration has a strategy to deal with geopolitical challengers who have different interests than our own – especially those who want nuclear weapons. It should sound familiar. It’s called containment.

If Iran will not end its meddling in the affairs of states around the region, stop sponsoring terrorist fighters and stop threatening Israel, then it should not be welcomed into the brotherhood of nation-states – or benefit from the economic system those peaceful nations have built.

That strategy, along with deterrence, worked to deal with an aggressive Soviet Union for four-plus decades. Now it can work to limit Iran’s regional and nuclear ambitions – as well as North Korea’s.

We must remember that Iran’s economy is only worth $350 billion – and its regional aspirations can be curtailed dramatically with tough economic sanctions.

Iran can’t spend billions of dollars causing trouble in Syria, Yemen, and Iraq – or funding terror groups, or building nuclear weapons – if it has no money to do so. And considering the problems Iran already has domestically –as evidence by nationwide protests a few months ago and again just recently – Iran has much to worry about.

It seems clear Tehran has a choice to make.

If Iran’s leaders are smart, they will stop fueling the flames of war and terror all over the Middle East and will stop flirting with nuclear weapons. Iran can then become a part of the international order.

If Iran’s leaders are foolish and continue on their current path they will pay the price for their actions, with their quest for regional power contained by an economic and diplomatic vise.

The good news is that America knows how to do deal with rogue states like Iran – something the mullahs should consider very, very carefully.