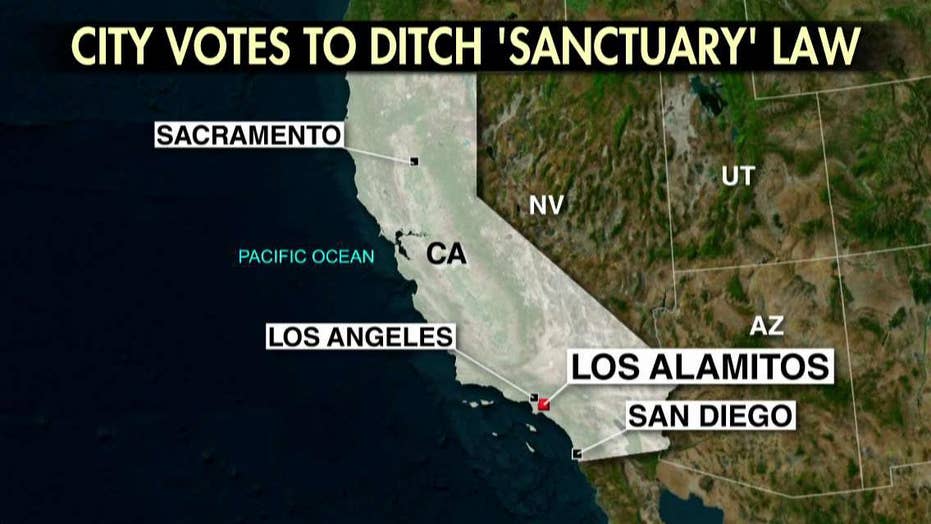 Los Alamitos council votes 4-1 to opt out of sanctuary law.

When President Trump recently visited California, he came away with the sense that it “is totally out of control.” If he arrived at that conclusion from just a single visit, imagine how many who live in the state feel.

To be fair, California itself isn’t out of control. There are many among the 40 million who honorably and honestly go about their daily business. Outside of Antifa riots and some infantile behavior on college campuses, there are no mobs in the streets; crime is up but not unrestrained; there are multiple efforts brewing to break up the state, but none are threatening violent insurgencies (though there is a Calexit movement that calls for the state to leave the union).

What is out of control is California’s ruling class. Much of its political agenda is hostile to basic human liberty and mocks the limits on what government should be allowed to do in an ostensibly free society.

Likely the sharpest thorn in Trump’s side is California lawmakers’ contempt of our federal system. States enjoy wide latitude to pursue their own destinies. The 10th Amendment provides states with “powers not delegated to the United States by the Constitution, nor prohibited by it to the States,” but it doesn’t allow them to conduct their own foreign policy, which is the province of the federal executive branch.

If all this isn’t enough to convince the rest of the country that California lawmakers are out of control, add to it legislation that regulates cattle flatulence in the name of the climate.

No matter what one feels about immigration, those who respect the federal system have to admit that this is out of bounds. Of course, the 78 state lawmakers who voted in favor of declaring California a sanctuary state think that their sort of secessionist thinking is just fine. But they have a test ahead. It’s going to be interesting to see if it’s acceptable to them for one of their cities to secede from their secession. What are they going to do with the Los Alamitos City Council, which voted on March 19 to exempt their Orange County city from the state sanctuary law?

Like the Legislature, Gov. Jerry Brown has also dabbled in foreign affairs. He’s invited “the whole world” to a climate summit in San Francisco this year and has signed climate deals with Chinese officials.

While Brown played on the world stage, state lawmakers were hard at work at home banning plastic shopping bags from grocery stores, proposing to criminalize what they see is the irresponsible use of plastic straws, and continuing to raise taxes, which are already the most backbreaking in the nation.

According to the Tax Foundation, California has the sixth-highest state-local tax burden as a percentage of income; ranks 48th in the State Business Tax Climate Index; has the most punishing individual top income tax bracket; and is home to the highest state sales tax. After passing a $52 billion fuel tax hike last year, California has moved closer to having the highest combined gasoline and diesel taxes in the country, though it’s not quite there yet.

If all this isn’t enough to convince the rest of the country that California lawmakers are out of control, add to it legislation that regulates cattle flatulence in the name of the climate; a law that requires greenhouse gas emissions to be cut 40 percent below 1990 levels by 2030, even though the law’s language says it will “at least” cost “hundreds of millions of dollars” a year; and a $15 minimum wage by 2022 that Brown admitted “may not make sense” economically and will without question depress employment.

Can it get worse? Bet on it. One legislator has proposed banning the sale of gas-powered cars by 2040. Another wants to require every kilowatt of electric power sold in the state to be generated by renewable sources by 2045. These ideas are, like so much public policy in California, as foolish as they sound.

Kerry Jackson is a fellow with the Center for California Reform at the Pacific Research Institute.