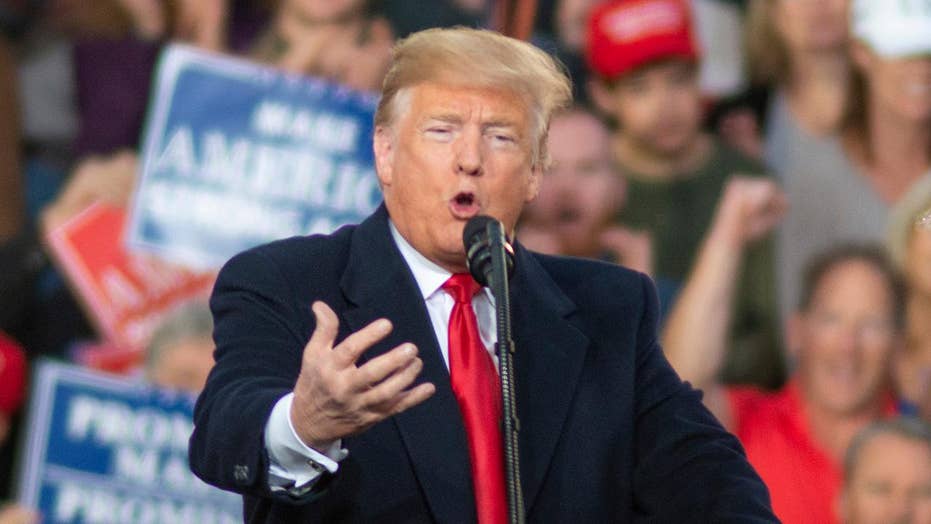 Trump steps up immigration rhetoric ahead of midterms

RNC spokesperson Kayleigh McEnay explains the strategy to put the issue at the forefront of the campaign.

President Trump is making history with his energetic push to elect Republicans to the House and Senate in the Nov. 6 midterm elections.

The unprecedented intensity of the president’s campaigning across the country seems increasingly likely to enable the GOP to gain seats in the Senate and keep Republicans in the majority in the House of Representatives – despite the view of many experts that Democrats are almost certain to capture control of the House.

Keep in mind that if the predictions by these same experts had been correct in 2016, President Hillary Clinton would be in the Oval Office today.

Typically, the party that controls the White House loses seats in Congress in the midterms. But as President Trump proved with his upset victory over Clinton two years ago, he draws tremendous support from millions of voters – and he is calling on his supporters now to vote for Republican candidates for Congress and state offices.

The president is making it clear to voters that if they want him to succeed in doing what they elected him to accomplish he needs a Republican Congress to support him. If Democrats gain control of one or both houses of Congress they will devote all their energy to investigating and obstructing the Trump administration at every turn, and may seek to impeach the president.

Republicans are gaining the support of voters because of several factors.

First the strong economy, rising wages, low unemployment rate, and the Trump tax cut are fulfilling the president’s promise to Make America Great Again. Voters are benefitting directly with more money in their pockets – and they are giving Republicans the credit.

Second, many voters are concerned with the mob tactics, the disregard of the concept of innocent until proven guilty, and vicious character assassination that Democrats deployed against President Trump’s extraordinarily qualified Supreme Court nominee, Brett Kavanaugh. Thankfully, Kavanaugh was confirmed by the Senate, but voters understand that if Democrats had controlled the Senate they would have rejected the Kavanaugh nomination for purely partisan reasons.

Third, many voters are disturbed by the would-be invasion of America by a caravan of illegal immigrants. They understand if we allowed everyone who wants to immigrate to America from around the world into our country, potentially hundreds of millions of people would take advantage of the opening. No nation can absorb that many immigrants all at once or can vet them all to ensure that dangerous criminals are not among the new arrivals.

Democrats have made clear that they are running against President Trump. But what do they stand for?

The Democrats have no realistic economic agenda, other than sky-high spending on socialized medicine and other Big Government programs that will guarantee crippling tax increases for all Americans.

Some Democrats are even proudly calling themselves socialists, embracing a failed system that has brought poverty, misery and a loss of liberty to people around the world. Many countries have rejected socialism in recent years, so it’s strange that so many Democrats want to embrace this bankrupt economic philosophy.

Early voting and the trending direction of polls add hard data to the theoretical surge for the GOP as we head into the midterms. Voters who are expected to cast ballots for Republicans are turning out in much greater numbers than Democratic voters.

What’s most important for every American to remember now is that to preserve and build on the achievements of the Trump administration and the Republican Congress, it’s vital to vote early or turn out on Election Day to cast ballots for Republican candidates.