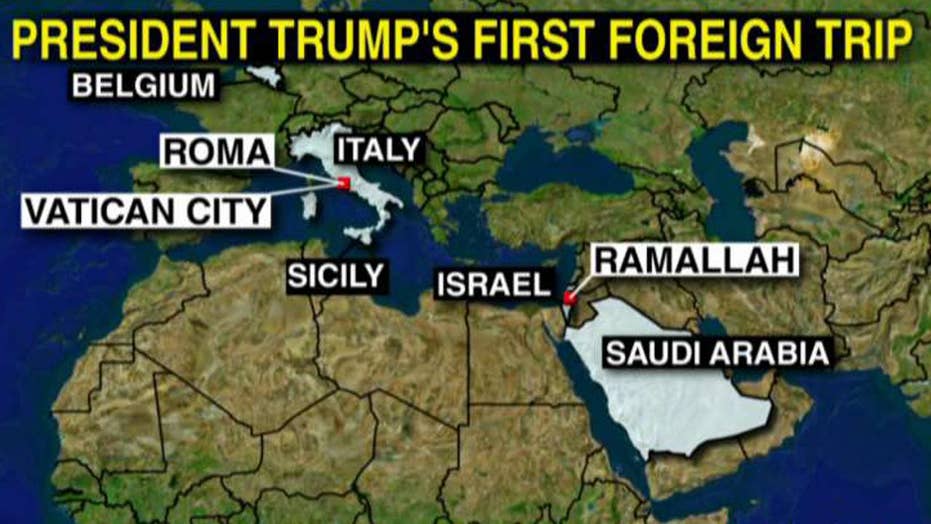 Foreign policy analysts were caught by surprise when the White House announced that President Trump would make his first stop in Riyadh, Saudi Arabia, on his first international trip.  In the midst of several tumultuous weeks in Washington, the stakes could not be higher for the President’s first foray onto the world stage.

One vividly remembers President Obama’s first international trip eight years ago, which included a controversial speech in Egypt that many critics believed set an apologetic tone on behalf of America to the world. At the beginning of his term, Obama sought to restructure the U.S. relationship in the Middle East, disengaging from “entanglements” in the region to focus on Asia.  Obama did actually reach those goals, and at the end of eight years our Arab and Gulf allies felt the sting of rejection from an American president that emboldened their enemy, Iran, and allowed Iraq and Syria to descend into chaos.  The Saudis and Emirates have not been quiet about their frustration with the U.S. during the previous administration, and now much credit must be given to Saudi Foreign Minister Adel al-Jubeir for the masterful diplomatic coup of scoring the first presidential stop in Riyadh.

Now the important work in the Gulf must begin.  America’s partnership with Saudi Arabia is often denounced by skeptics as a marriage of convenience around oil—but the stakes are much higher than that.  The fight against ISIS, potential peace between Israelis and Palestinians, and marginalizing Iran are all impossible without the Saudi alliance.  Our shared military and intelligence relationship with Saudi Arabia is vital as we root out ISIS (and Al-Qaeda) in Iraq, Syria, Yemen and Libya, and no Israeli will ever see lasting peace with Arabs without the credibility of an endorsed and engaged plan from the Saudis.

Finally, we have a common enemy in Iran, who has been emboldened not only by a flawed nuclear deal, but by the weakened stature of the Gulf under the Obama presidency.  Not only Saudi Arabia, but Yemen and Bahrain were also greatly diminished over the past eight years. Which is a shame, as the U.S. had a serious counterterrorism partner in Yemen’s President Hadi, and by not supporting him sufficiently in the fight against Al Qaeda in the Arabian Peninsula (AQAP), we put our homeland at greater risk.  In Bahrain, Iran constantly meddles in their internal affairs, as well as in the Kingdom’s eastern province, where Iran is trying to sew discord and support their Shia proxies.

President Trump’s team has indicated that he will support a version of an “Arab NATO,” an ambitious plan that the Saudis have pushed for some time.  This concept is worth exploring with the Gulf and Levant, but the challenges of ethnic and religious tribalism will no doubt plague this security alliance, as they have before in other military arrangements.  However, given the state of the Middle East, it is wise of the Trump Administration to pursue active engagements that bring allies together.

Ultimately, America will never be able to solve all of the problems the Middle East currently faces, but we can exert leadership and influence in an aggressive way that will add to stability in the region.  The only way to push back on Iran and stop their continued destabilization of the region is through a strengthened Saudi Arabia.

However, keep in mind that the President has indicated that American involvement is not without cost from our friends.  Trump has noted all countries must pay their fair share for their own security, and he will want the Gulf to have skin in the game for any actions in the Middle East on which the U.S. embarks.  The President is right to push Saudi Arabia and the UAE on this point.  For too long the U.S. has been pushed into military action in a region where its young men need to learn to fight and die for their countries.

And as important as our strategic partnership with Saudi Arabia is – as the reasons listed above show – we must never forget our core human rights values.  But instead of virtuously lecturing from on-high, as was the previous president’s tactic, we must use our newly reinforced friendship with Saudi Arabia to continue to push for a more modern society that improves the rights and lives of women and minorities.  We must continually hold their feet to the fire as it relates to educational reform in their madrassas and religious institutions, and we must hold them accountable when their religious leaders spew intolerable language towards the Jewish people and the state of Israel.

Saudi Arabia has been embarking on an effort to make substantial change in their society—we should support those endeavors while helping to strengthen those institutions that are with us in the fight.

Seventy-two years ago on a ship in the Suez, an American President also met a King, and a long relationship began.  It has taken some perilous turns since President Franklin Roosevelt and King Abdul Aziz first clasped hands, but on Saturday, when the new American president meets a new king, a new era has surely begun.