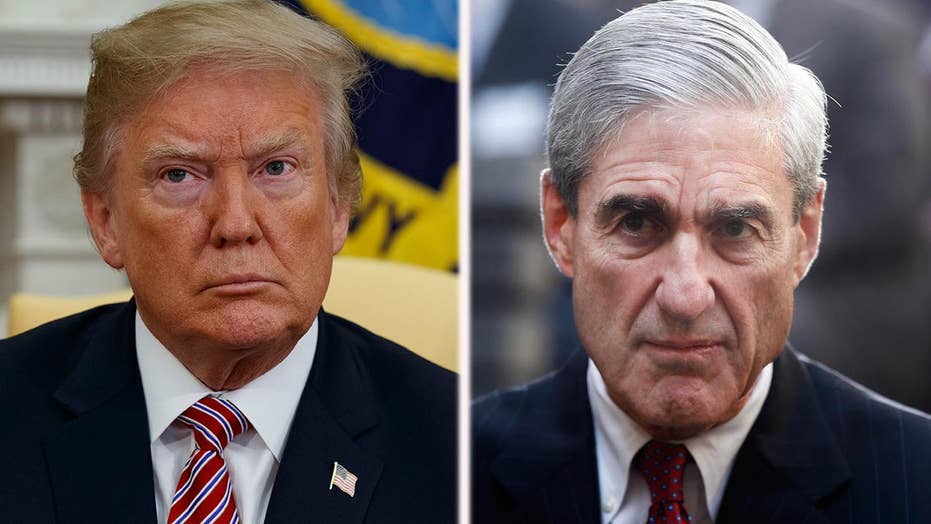 President says despite 'never ending and corrupt Russia investigation' there's 'no collusion or obstruction'; reaction and analysis on 'The Five.'

It would be unconstitutional for Congress to prevent President Trump from firing Special Counsel Robert Mueller, who is probing Russia’s interference in the 2016 presidential election.

I’m not saying that firing Mueller would be a wise move politically, nor am I urging the president to do so. That’s another issue.

But under the Constitution, it is beyond the power of Congress to limit or impose conditions on any president’s authority to remove a political appointee within the Justice Department or any other department in the executive branch.

Whether you think Donald Trump is an absolutely wonderful president or an absolutely awful one, this holds true, as it does for all other presidents, regardless of political party.

Senators Thom Tillis, R-N.C., and Chris Coons, D-Del., are nevertheless pressing ahead to seek passage of legislation they are sponsoring called the Special Counsel Integrity Act. Under this bill, only the attorney general could discipline or remove a special counsel.

If the attorney general has been recused from the case (as Attorney General Jeff Sessions is with the Russia probe), then the “most senior Department of Justice official who has been confirmed by the Senate” could exercise this authority under the bill.

But despite denials by its proponents, this bill violates basic constitutional principles. Under Article II, Section 2 of the Constitution, the president is given the authority to appoint – with the approval of the Senate – “Ambassadors, other public Ministers, and Consuls, Judges of the supreme Court, and all other Officers of the United States.”

Congress is also allowed, by law, to “vest the Appointment of such inferior Officers, as they think proper, in the President alone, in the Courts of Law, or in the Heads of Departments.”

What this means is that the president staffs the executive branch with more than 4,000 political appointees. Only about a quarter of these have to be approved by the Senate. The rest are “inferior” officers who can be appointed directly by the president or other top executive branch officials, such as Cabinet secretaries.

All of these officials – with the exception of judges and certain other officers (for example, the heads of federal agencies such as the Federal Election Commission and the Securities and Exchange Commission) serve at the pleasure of the president. That means they can be removed by the president for any reason or no reason.

The fact that a Cabinet official may appoint political subordinates – such as a special counsel – does not take away the authority of the president to remove those subordinates.

In 1926 in Myers v. U.S., the U.S Supreme Court held that the grant of executive power to the president in Article II to make appointments carries “with it the power of removal.”

The reason for this recognized constitutional “principle is that those in charge of and responsible for administering functions of government, who select their executive subordinates, need in meeting their responsibility to have the power to remove those whom they appoint.”

However, that delegation does not void the power of the president to remove either the attorney general or any of the other political appointees within the Justice Department. And Robert Mueller is a political appointee – not a civil service career employee protected by merit system protection rules.

The Supreme Court has held that Congress can limit the ability of the president to remove the heads of certain independent agencies. In 1935, in Humphrey’s Executor v. U.S., the court held that Congress can set the period of time that the heads of such agencies – in that case the Federal Trade Commission – hold office and limit the president’s authority to remove them except for cause.

The Supreme Court said this is because independent agencies such as the FTC have “quasi legislative or quasi judicial functions.” The FTC “is an administrative body created by Congress to carry into effect legislative policies embodied in the statute … and to perform other specified duties as a legislative or as a judicial aid.” It is not “an arm or an eye of the executive.”

The bill that Senators Tillis and Coons are pushing is similar to a provision of the Sarbanes-Oxley law that the Supreme Court found unconstitutional in 2010 in Free Enterprise Fund v. Public Company Accounting Oversight Board.

As a result, there were two layers of “protected tenure” between the president and the Oversight Board.

The Supreme Court held that this double layer violated the president’s executive appointment power. Without the ability to oversee the Oversight Board’s conduct, the president cannot carry out his duty to ensure that the laws are faithfully executed.

The president has to “have some power of removing those for whom he cannot continue to be responsible” because the “buck stops with the President,” the Supreme Court said.

Tillis and Coons are attempting to take away the president’s power to ensure the accountability of subordinates within the Justice Department. That is a direct, frontal attack on his constitutional authority.

Supporters of this bill will no doubt point to another Supreme Court case, Morrison v. Olson, in which the Supreme Court in 1988 upheld the constitutionality of the now-defunct independent counsel law.

This is the law under which independent counsels such as Ken Starr were appointed by a group of federal judges to conduct far-ranging investigations of executive branch officials – including President Clinton – that seemed to never end.

Congress allowed the independent counsel law to expire in 1999 after much criticism of the constitutionality and wisdom of such a law.

Supreme Court Justice Antonin Scalia wrote a scathing dissent over the basic violations of constitutional principles posed by a prosecutor who is unaccountable to the chief law enforcement officer of the United States – the president.

Scalia described the independent counsel law as a “wolf (that) comes as a wolf.” The “investigation and prosecution of crimes is a quintessentially executive function” and the executive power of our government is solely “vested” in the president, the justice said.

Thus, according to Scalia, the “President’s constitutionally assigned duties include complete control over investigation and prosecution of violations of the law.”

In any event, Mueller is not an “independent” prosecutor chosen by federal judges. He is an employee of the Justice Department, which is an executive branch agency entirely under the authority of the president.

So the bottom line is that Congress cannot limit the president’s authority to remove a political appointee such as Mueller.

Sen. Chuck Grassley, R-Iowa, was right to voice his concern over the Tillis-Coons bill, and Senate Majority Leader Mitch McConnell, R-Ky., took the correct path in announcing that there will be no floor vote on this unconstitutional proposal.