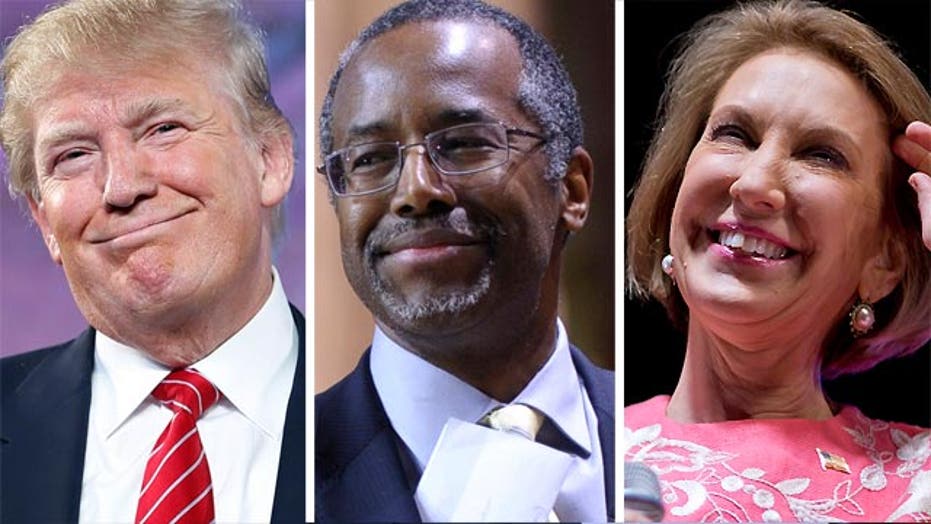 Why voters are thinking 'outside' the box for 2016

Donald Trump, Dr. Ben Carson, Carly Fiorina ... why Washington 'outsiders' and not traditional politicians are resonating with voters so far in the 2016 presidential race

According to a recent poll, Donald Trump is leading the 2016 Republican presidential primary field in Iowa, and Ben Carson is in second place.

Never before in history, to my knowledge, have two candidates who have held no prior elected office fared better in American presidential politics.  There’s a reason, in my opinion.  And it isn’t that people are voting with anger.  It’s that they’re voting with real intention and focus. Once things get bad enough for any organization that people truly value—whether a country or a company—they just want it fixed.

That explains Carly Fiorina polling ahead of Jeb Bush in Iowa, too.

When I was a medical student, we had a professor of ophthalmology who wasn’t thought of as a very nice guy.  He was gruff and imperious.  And he was also one of the most sought-after eye surgeons in the world.  A friend of mine asked why people still flocked to him, when he had such an imperious demeanor.  “When you’re worried you might go blind, you don’t care whether your surgeon is a gentleman,” I told him.  “You just want to be able to see.”

Once things get bad enough for any organization that people truly value—whether a country or a company—they just want it fixed.

Barack Obama paved the way for brilliant organizational surgeons like Donald Trump and Ben Carson (a surgeon, for real -- no accident) by turning the lights out on America.

He so gravely moved the country away from its God-given role as a beacon of freedom and faith that we are now nearly blind, looking for that gifted healer whose only qualification need be that he or she can do the job -- for real.

We don’t have the luxury to engage in that misguided discussion patients so frequently have with family members, “He seemed like such a nice man.  He explained everything about the procedure very well.”  We’re right where patients of that eye surgeon were when they flocked to his office and left saying things like, “Wow, he’s not exactly warm and fuzzy, is he?  I just hope he can fit me in soon.”

America is dying, courtesy of Barack Obama.  And voters finally care about one thing:  Does someone have the goods and the guts to save the life of our nation?  Period.

So what if Donald Trump isn’t the most eloquent or measured man on the planet.  Who cares?  He’s a brilliant strategist.  He’s so real that he dove into the quicksand of reality TV and emerged, unchanged, as himself.

So what if Ben Carson doesn’t pound podiums and get pulses racing.  He’s soft-spoken, like a political poet, maybe because he saved lives -- like those twins joined at the head, whom he famously separated -- without shouting at all.  He just prayed, then went into that O.R. and did it.

This is as it should be. You will remember that when Moses stood before the burning bush, he argued that he was not the man to journey to the Pharaoh and demand he release the slaves.  Moses noted he was an unlikely messenger.  He was not a gifted speaker and had once killed a man.

But, God was having none of it. The future of His people would rest with Moses, a flawed human being, with a very imperfect past who, nonetheless, God knew had what it would take to lead his people to the Promised Land.