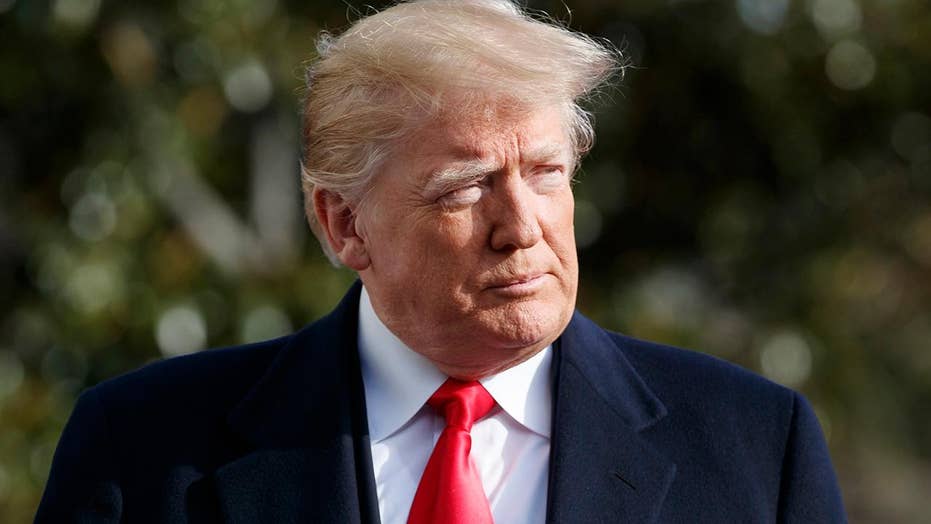 A sentencing memorandum filed Friday in U.S. District Court in New York City regarding former Trump personal attorney Michael Cohen states that Cohen “acted in coordination with and at the direction of” presidential candidate Trump to make hush-money payments during the 2016 presidential campaign to two women who allege they had extramarital affairs with Trump.

President Trump has denied having affairs with the women – adult-film actress Stormy Daniels and Playboy model Karen McDougal – and denied doing anything illegal.

The sentencing memo was filed following Cohen’s guilty pleas to multiple counts of business and tax fraud. He also pleaded guilty to making an excessive contribution to the Trump campaign (the hush-money payments to Daniels and McDougal) and to making false statements to Congress regarding unsuccessful efforts to build a Trump Tower in Moscow.

In the sentencing memo, the U.S. attorney in the Southern District of New York asked the court to impose a “substantial term of imprisonment” against Cohen of about four to five years. Cohen is scheduled to be sentenced Wednesday.

According to the Justice Department, Cohen described the payments as “election-related expenses” and “sought reimbursement” for them, illegally tapping into President Trump’s campaign funds.

But in fact, as President Trump told “Fox & Friends,” in August, the payments weren’t illegal because “they came from me,” rather than his presidential campaign.

Not surprisingly, the #Resistance is now exploiting the Justice Department’s allegations as cause for impeachment of the president. In the words of Rep. Jerrold Nadler, D-N.Y.: “They would be impeachable offenses,” if proven true.

Of course, proof is in short supply. Outrage aside, the new memorandum supplies us with no new facts. All of the allegations in the document were already made by Cohen months ago, when he pleaded guilty to save himself at the expense of his former client, President Trump.

What passes as “news” is just the liberal media – ever-eager to take unsubstantiated cheap shots at President Trump – spouting their usual histrionics for ratings and clicks.

The bottom line remains this: Trump did not violate federal campaign finance laws. Why? Because the payments to Daniels and McDougal amounted to a “private transaction,” as the president himself acknowledged, for a purpose he believed to be unrelated to politics.

The “Trump” name is a brand, and that brand is big business. Protecting that brand’s reputation is critical to the business that uses it – just as it is for brands like Pepsi-Cola or United Airlines.

The fact that the man whose name is Trump happened to be a political candidate did not magically transform brand management into a campaign contribution.

Just ask Reps. Don Beyer, D-Va. and Markwayne Mullin, R-Okla., whose family-named companies were still active during and since their own successful candidacies.

Whatever money was paid out was clearly done to protect “Trump” the corporate brand – not Trump the political candidate, just as the Trump business has done before.

In the Justice Department’s memorandum not a single shred of evidence was presented to explain how a legal business expense became an illegal campaign contribution. Speculation is not enough to prosecute so-called “campaign finance violations.” Prosecutors need actual proof.

Even if the hush-money payments suddenly became a reportable Federal Election Commission (FEC) expenditure, they amount to a trivial FEC reporting issue – at worst. The money involved comes out to far less than President Obama’s millions in unlawful contributions, for which his 2008 campaign paid a fine, or the FEC’s investigation into Hillary Clinton’s $84 million money-laundering scheme.

Let’s also consider the source of the anti-Trump allegations here. Can we really trust Michael Cohen, a man who violated the legal profession’s most sacred concept of attorney-client privilege to save his own skin? Can we trust a disgraced turncoat lawyer who threw his longtime client into the fire of this penny-ante witch hunt?

But when those lies prove convenient for their narrative, the left will sanctify them to kick start impeachment proceedings.

Nearly two years and $30 million later, the investigation by Special Counsel Robert Mueller of allegations of collusion between Russia and the Trump campaign to make Donald Trump president is no closer to finding dirt – any dirt – on President Trump.

The actual evidence here points to nothing but a routine business transaction, unless you count the self-serving words of a man the Justice Department itself has branded a liar.

How many more months and millions of taxpayer dollars – and Cohen lies – will it take for federal prosecutors to wake up?

Dan Backer is a veteran campaign counsel, having served more than 100 candidates, PACs, and political organizations, including the Committee to Defend the President. He is founding attorney of political.law, a campaign finance and political law firm in Alexandria, Virginia.