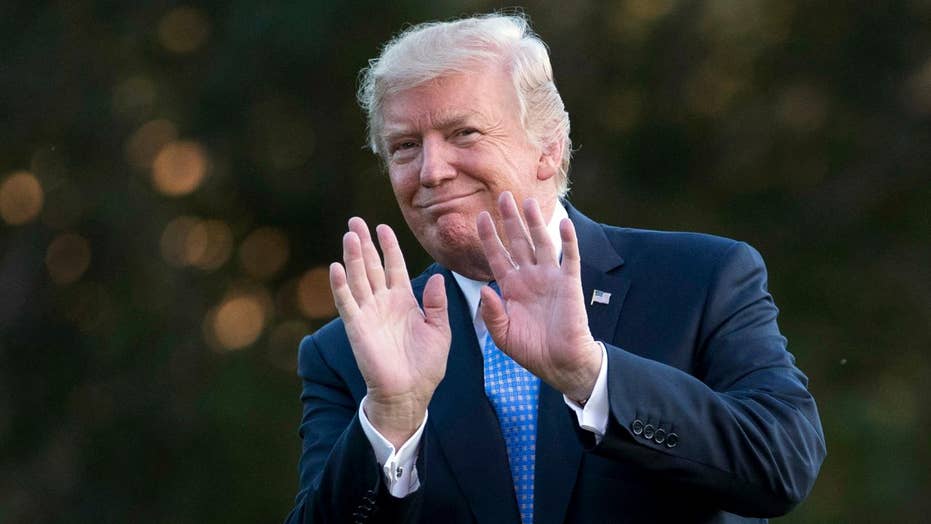 Fox News media analyst Howard Kurtz says the media are suddenly 'laser-focused' on how the GOP tax reform proposal will blow up the deficit.

The 2017 Super Bowl Part II pits President Trump against the sports elite and most of the media. It might be a fair fight if Trump didn’t have the majority of football fans on his side.

Trump threw the bomb early. He scored on an unprepared defense with harsh comments about NFL protesters, calling them SOBs. Only he didn’t abbreviate. The sports world quickly rallied with enough op-eds, TV hot takes and tweets to defeat mere mortals.

Trump is no mere mortal.

The media tried to blitz him. NBC political analyst Anand Giridharadas told the Trump-hating “Morning Joe” team that the president, “is activating racist sentiments and a kind of chauvinism, cultural chauvinism.” The racism tag is a common left-wing offensive strategy and they used it heavily.

CNN’s anti-Trump cheerleader Brian Stelter worked to rally his team. “There is an unmistakable racial element to this story,” he lamented during his oddly named “Reliable Sources” program.

Stelter then resorted to a classic journalism trick play, posing questions as a way of making a bogus allegation. “If he's not racist, why do so many Americans believe that he is? And how is that going to affect the rest of his presidency?”

Gumbel harshly criticized the “current occupant of the White House.” “That occupant’s weekend series of racist, churlish, and childish comments drew a variety of stunning rebukes and actions, which suggests that jocks may finally be realizing that apathy won't cut it anymore,” he argued.

Essentially, Gumbel is telling athletes to go left or go home. The left’s plays were well-scripted and repeated again and again.

The rest of the media piled on like a fight for a loose ball. MSNBC’s “Deadline: White House” phony conservative host Nicolle Wallace, D-$$, delivered another classic dirty play, using the ‘someone says,” attack. “Someone said that was Neanderthal,” Wallace claimed of Trump.

“The View” host Whoopi Goldberg tried to score some easy points, calling the president a “bum-in-chief” and falsely claiming his comments violated the players’ rights. (Hint: The same constitutional amendment that protects player speech protects the president. But player action at work is up to their employers.)

Leave it to one of the left’s star sports players, Bob Costas of NBC Sports, who attacked both the president and his team. “You're not going to find many voices of support outside his base, his extreme base, for these remarks,” he predicted.

Costas was incredibly wrong, in the outlandish way that teams totally underestimate their opponents, typical for media types in regards to Trump and for the Baltimore Ravens playing Jacksonville. A Remington Research Group survey found that nearly two-thirds of fans want players to stand for the national anthem – 64 percent for it and only 24 percent opposed.

Had those numbers been reversed, they’d been burned into TV screens across the nation.

2. There Was a Ton More Stupid Protest Commentary: The media didn’t spend all their time playing offense. They also resorted to celebrating the protesters and ignoring the fans. “NFL Today” host James Brown went on “CBS This Morning” to do PR for unemployed QB Colin Kaepernick, calling him a “bridge builder.”

Kaepernick is beloved by the far-left sports media for being the most woke athlete. They kept his story alive even when the QB’s career was not. ESPN, especially, spent an epic amount of on-air and website time urging or demanding teams sign their favorite football non-star.

Brown, who goes by J.B. in the sports world, was no different, bringing up Kaepernick’s community work as a defensive move. “I have to give him credit for, even though I might choose a different course of action myself, the fact of the matter is he's committed,” Brown said. “He’s put his money where his mouth is. Nearly a million through community efforts to be a bridge builder.”

What J.B. left out was Kaepernick’s other efforts – wearing socks depicting police as pigs, wearing a shirt of the late Cuban dictator Fidel Castro (which is why Jay Cutler is now Miami’s QB, not Kaepernick.)

That was hardly the only pro-protester bit. Every media outlet was overflowing with them, like stadium  toilets on Super Bowl Sunday.

ABC’s “Nightline” actually depicted Kaepernick as a modern day Jackie Robinson. Reporter Chris Connelly sounded more like Billy Joel, saying Kaepernick, “did not start the fire.” “Seventy years ago, this was the face of change and of social activism in sports when Jackie Robinson broke baseball's color line in 1947 with the Brooklyn Dodgers.”

Some of the protest stories were just as propagandistic in other ways.

Director Spike Lee was even more blatant, arguing that President Trump was acting “like the owners are the plantation owners and the guys playing in the league, they’re on the plantation.” Yep, earning millions of dollars on the plantation. Just like slaves. There are no words sometimes for Hollywood stupidity.

And despite claims otherwise, yes, the left is actively against both the anthem and the nation it represents. CNN lefty commentator Marc Lamont Hill criticized the anthem and said he doesn’t stand for it.

“I come on here every week and talk about white supremacy – I say Donald Trump is a white supremacist – I don't stand for the national anthem – and CNN still employs me,” Hill said. That’s both a reflection of free speech and the fact that far-left politics are hardly unpopular at CNN.

Reliably left-wing and pro-Arab street Al-Jazeera ran an anti-”white power” op-ed that questioned even singing the anthem. “And why, and forgive me for asking, are we playing the national anthem at sports games anyway? So we can fake sing words we don’t know?” asked writer John Sims. Now that Al-Jazeera America has folded, the network can be more public about hating the U.S.

3. Moore Or Less?: Turns out that the major media and President Trump actually agreed on something – they both wanted Judge Roy Moore to lose in the Alabama U.S. Senate race. Unlike the media, the president has already moved on and endorsed the GOP nominee. The media are just getting started trying to aid the Democratic nominee in his fight against Moore.

One-time Democratic presidential campaign staffer turned MSNBC’s “MTP Daily” host Chuck Todd showed where the media and the left want to go with Moore’s contest. He claimed the GOP nominee “doesn't appear to believe in the Constitution as it's written.” Why? Moore said our rights come from God.

Perhaps because Moore made his reference to God because he read the Declaration of Independence that says people, “are endowed by their Creator with certain unalienable Rights.” According to Todd, whose wife is a Democratic consultant, Moore has “very fundamentalist views.” Horrors.

The Associated Press was nearly as ridiculous, filling its story with comments about the state’s segregation, former Gov. George Wallace, etc. It then described Moore as “a horse-riding, gun-toting Vietnam veteran who has talked for his entire public career about acknowledging the God of the Christian Bible." At least that part won’t hurt him.

Look for the tagging game to be a key way the media target the conservative, would-be senator. He’s a “firebrand,” a term used so often that The Atlantic wrote about it. References to him as “ultra-conservative” or  “extremely conservative” were also featured. Ever notice how liberals are never “ultra” or “extreme?”

4. The Weiner Saga: Given how many Americans have seen former Rep. Anthony Weiner’s … party ID, you’d think journalists would know it by now. Yet, somehow they keep forgetting. Maybe they could get him to text it to them, but open that message at your own risk.

The New York Times, D-N.Y., had its second recent incident of Soviet-esque deletion, as Weiner’s party was nowhere to be found in the first draft of the story of his sentencing. “Weiner, Teary and Chastened, Is to Serve 21 Months for Lewd Texts,” read Democrat-less headline and the story read the same way, just like the paper’s story about the trial of Democratic Sen. Bob Menendez of New Jersey.

Monday night, after the sexting sentencing, both CBS and NBC ignored Weiner’s party. ABC went a step further and ignored the scandal entirely. The next morning, CBS was at it again, ignoring Weiner’s party affiliation. But this time with a hilarious reason.

“CBS This Morning” host Charlie Rose cited The Times in his report: “The New York Times says former Congressman Anthony Weiner was sentenced to 21 months in prison for sexting with a 15-year-old girl. Weiner cried as a federal judge handed down the sentence yesterday. He was also fined $10,000 and ordered to register as a sex offender.” This is why conservatives complain about bias at outlets like The Times. It multiplies like eager rabbits.

Hurray For Hollywood: The season’s upon us. Not Christmas (except in stores). No, it’s the opening of the fall TV season staggered across many weeks because of the growth of networks and streaming services. This fall, viewers can expect at least 16 scripted shows to target the president, and that doesn’t count the late-night lunacy of the anti-Trump talk-show circuit.

And the shows are off and hating. “Will & Grace” has returned after 11 years and apparently the writers have been making jokes about the right the entire time, because the first episode was chock full of them. “American Horror Story: Cult” used the infamous word Trump used in the “Access Hollywood” tape referring to women’s genitals 18 times in the latest anti-Trump episode. Amazon’s “Transparent” did the transgender “Full Monty” with a full, trans nude scene.

Lefty comedienne Sarah Silverman complained that President Trump’s calling people the Hollywood elite is “just kind of the new version of ‘Jews.’” (That sounds awfully like the nutty sites that say Jews run Hollywood, so blame her.)

And head-chopping jokester Kathy Griffin was featured on the cover of the Guardian in an image merging her picture with murderous revolutionary Che Guevara.