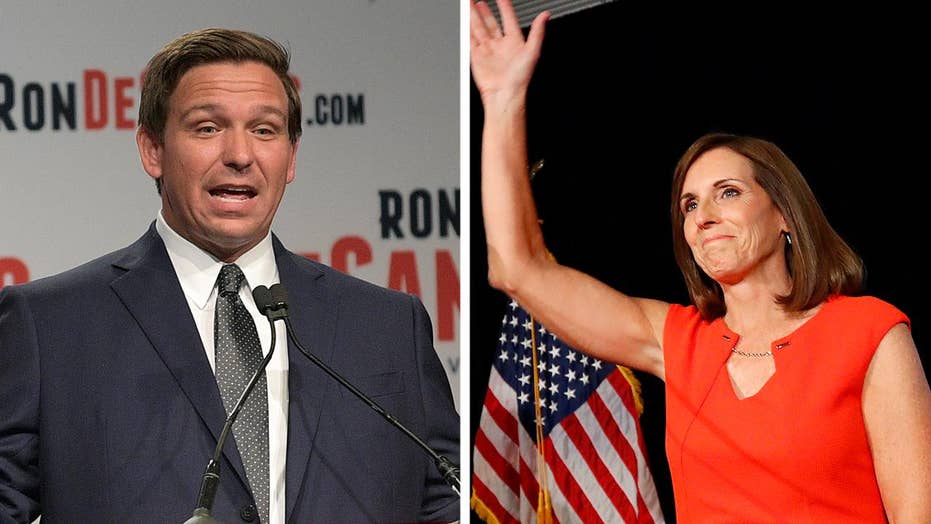 Candidates expressing strong support for President Trump continued their winning streak in Republican primaries Tuesday, capturing nominations in Florida, Arizona and Oklahoma. The victories confirm the strong approval ratings the president gets from Republicans across the nation.

In Florida, Republican voters nominated U.S. Rep. Ron DeSantis to be their candidate for governor. DeSantis, a three-term congressman from the Jacksonville area, won a decisive victory over state Agriculture Commissioner Adam Putnam.

DeSantis was the underdog in the race until President Trump enthusiastically endorsed his candidacy and became a vigorous supporter. The president’s backing propelled DeSantis, who earned a Bronze Star in the Navy, to an impressive 57 percent to 37 percent victory over Putnam.

DeSantis has earned a reputation as an innovative conservative reformer in Congress and is well-positioned to take on Andrew Gillum, the far-left Tallahassee mayor and Democratic nominee who is backed by democratic socialist Sen. Bernie Sanders of Vermont.

Also in Florida, two-term Republican Gov. Rick Scott – another strong supporter of President Trump – easily won the GOP primary to become the party’s U.S. Senate candidate against Democratic Sen. Bill Nelson. Scott currently leads Nelson by a margin of 46 percent to 44 percent, according to an average of recent polls.

Nelson, who has enormous name identification as the incumbent, is in a precarious position with such low support in the polls. Growing numbers of voters are seeing him for what he is – an out-of-touch career politician who has held elected office for most of the past 46 years.

Gov. Scott has pledged to help enact President Trump’s “America First” agenda if voters send him to the Senate. This represents a stark contrast to Nelson, who has essentially become little more than an obstructionist, following the lead of Senate Minority Leader Chuck Schumer, D-N.Y.

The run-off election in Oklahoma provided clarity for the fall elections in the Sooner State. Republicans chose political newcomer and businessman Kevin Stitt over former longtime Oklahoma City Mayor Mick Cornett as their candidate for governor.

In the general election campaign, Sinema will have to explain to Arizona voters why she sided with House Democratic Leader Nancy Pelosi of California in opposing President Trump’s historic tax cut. The tax cut has paved the way for robust economic growth, millions of new jobs and extraordinarily low unemployment rates – including the lowest Hispanic unemployment numbers ever recorded.

Senate Races Around the Country

Following Tuesday’s primaries, the stage is finally set in all the critical races around the country that will decide control of the U.S. Senate in the midterm elections.

In West Virginia, Trump-backed state Attorney General Patrick Morrisey will take on two-faced Democratic Sen. Joe Manchin. Manchin talks up the Trump agenda on one end of Pennsylvania Avenue and then votes against it when he’s with his pal Chuck Schumer on Capitol Hill.

Morrisey will make the case that the Hillary Clinton-supporting Manchin clearly no longer represents the interests of West Virginia, a state whose citizens adore President Trump and rewarded him accordingly with an astonishing 42-point margin of victory in 2016.

Republican Trump-backed candidates are faring extremely well across the country in states the president won in 2016.

Similarly in Montana, where Trump cruised to a 21-point victory in 2016, Republican state Insurance Commissioner Matt Rosendale is leading liberal Democratic Sen. Jon Tester according to a recent poll.

Another hotly contested Senate race in the Midwest is in Missouri, where polls indicate conservative Republican state Attorney General Josh Hawley is running neck and neck with Democratic Sen. Claire McCaskill, another liberal career politician. President Trump is planning another trip to Missouri next month, a state he carried by 19 points in 2016.

And finally, in Indiana conservative outsider Mike Braun is running a very strong race to take the seat of Sen. Joe Donnelly, the incumbent Democrat. President Trump will be returning to Indiana this week – another state he carried by a commanding 19 points in 2016.

It’s clear that the Democrats in the Senate facing re-election in Trump Country are going to have plenty of sleepless nights between now and Election Day.

Or will voters choose the Schumer-Pelosi Democratic agenda of tax hikes, open borders and a meritless partisan impeachment witch hunt that will only be a waste of time and money?

The American people will study the issues and the candidates and make their decision. It’s a big one.