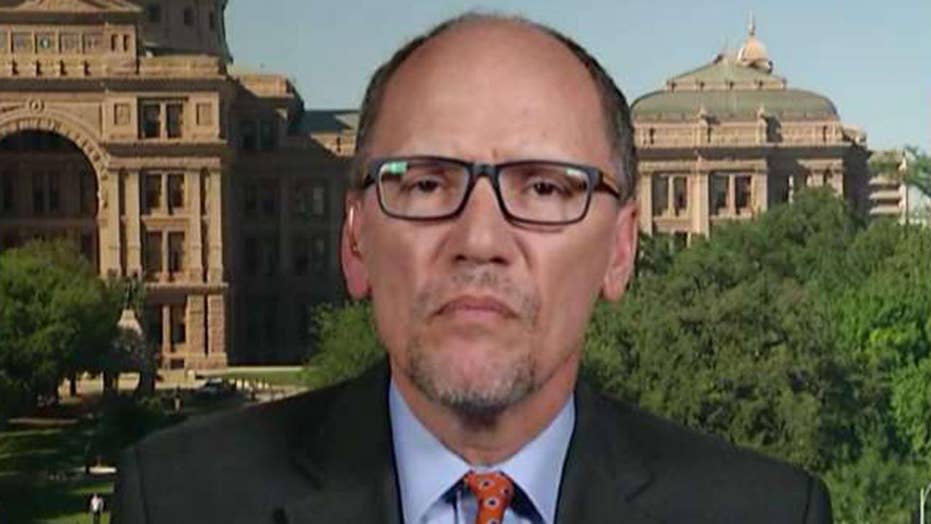 DNC chair Tom Perez on release of the Mueller report: A sad day for the institution of the presidency

The notion that President Trump did not try to obstruct justice is 'hogwash,' says Tom Perez, chairman of the Democratic National Committee.

The report by Special Counsel Robert Mueller paints a stunning picture of bottomless corruption in the Trump White House.

The report makes it crystal clear that Donald Trump has spent his entire presidency engaged in a nonstop campaign of obstruction, intimidation and abuse of power. It plainly details Russia’s assault on our democracy, and it describes a Trump team that gleefully sought to benefit politically and financially from that attack.

What’s more, the investigation confirmed that President Trump consistently ordered his advisers to commit acts they believed to be illegal.

More than 30 people and three companies have been indicted as a result of the Mueller investigation, including six members of Trump’s campaign and inner circle. The investigation has also brought in more than $28 million in fines, forfeitures, and restitution from criminals.

The American people deserve the full truth, and they demand accountability. When our government works as it should, the United States attorney general is responsible for enforcing our laws and upholding our principles of justice.

With Michael Cohen headed to prison, it seems President Trump found himself a new fixer in William Barr. The attorney general’s four-page summary last month was a smokescreen and his press conference Thursday was a farce, little more than a fawning tribute to his boss, full of deception and falsehood.

In the absence of an impartial attorney general, Congress has a responsibility to finish evaluating the president’s conduct. Truth and transparency go hand in hand, and it is imperative that the full unredacted Mueller report be made available to every member of Congress immediately.

We don’t call it “democracy” when other world leaders hide their deeds from the light of public scrutiny. And as long as Republicans continue to justify and enable Trump’s shameful behavior, the entire foundation of our democracy is at risk.

And we know the Russian candidate of choice was and is Donald Trump.

Democrats will stop at nothing to make sure the American people get the answers they deserve. We will not let Russia off the hook for its crimes. We will not let Republicans help Trump bury the truth. And we will not let this president desecrate our Constitution with his corruption.

History will not be kind to this president, nor will it forget the cowards and criminals who enabled him.

But history will also remember the courage of those who stood for the rule of law and the integrity of our democracy. It will remember leaders who put country over party, activists who march and make their voices heard, and voters who use the power of the ballot box to hold this administration accountable.

Justice is blind and no one is above the law.

Tom Perez is chair of the Democratic National Committee. He was secretary of labor during President Obama’s second term and was an assistant U.S. attorney general for civil rights during Obama’s first term.