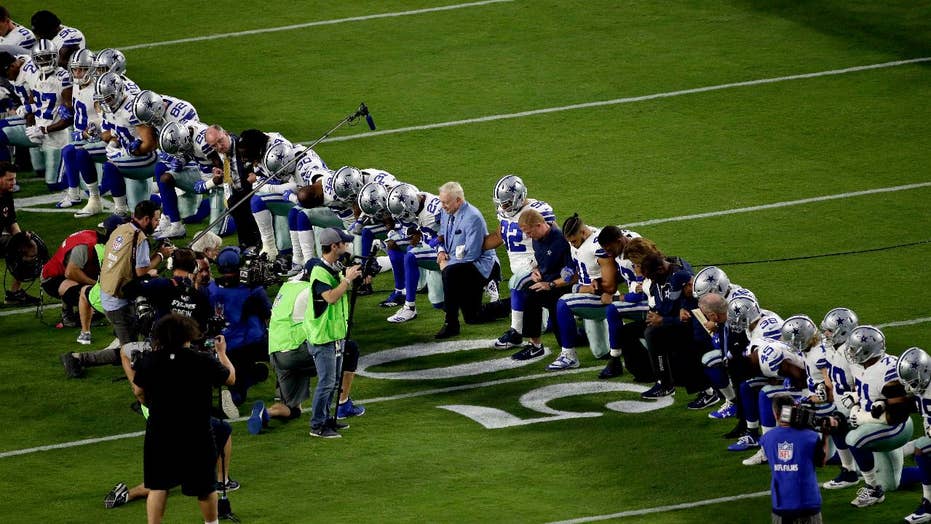 The Veterans of Foreign Wars and the American Legion issued blistering condemnations of the National Football League – calling recent protests against the national anthem disrespectful, misguided and ungrateful.

“There is a time and place for civil debate, and wearing team jerseys and using sporting events to disrespect our country doesn’t wash with millions of military veterans who have and continue to wear real uniforms on real battlefields around the globe,” said VFW leader and Vietnam War veteran Keith Harman.

Over the weekend, more than 200 professional football players either took a knee or stayed in the locker room during the playing of the national anthem. It was widely considered as a direct attack on the military and American patriotism.

“I stand for our flag and anthem, and I kneel for our fallen,” he said. “That’s what patriots do. We rally around the flag of our country, not use it and our Constitution as both shield and sword.”

On Friday, President Trump spoke for many Americans when he called on NFL owners to fire players who disrespect the flag.

“Wouldn’t you love to see one of these NFL owners, when somebody disrespects our flag, to say, ‘Get that son of a b**** off the field right now. Out. He’s fired. He’s fired.”

Instead of apologizing for disrespecting the nation, NFL Commissioner Roger Goodell fired back at Trump.

“Divisive comments like these demonstrate an unfortunate lack of respect for the NFL, our great game and all of our players, and a failure to understand the overwhelming force for good our clubs and players represent in our communities,” Goodell said.

“There are many ways to protest, but the national anthem should be our moment to stand together as one United States of America,” Rohan said.

The American Legion was one of the original architects of the U.S. Flag Code and the code requires all present to stand at attention while the anthem is played.

“It wasn’t political when it was written and it shouldn’t be political today,” Rohan said. “Having a right to do something does not make it the right thing to do.”

Several VFW posts have decided to ban NFL games inside their facilities.

VFW Post 3345 in Strongsville, Ohio declared itself as the “Home of the NFL No-Zone.”

“After what happened with the NFL players on Sunday we decided to cancel our NFL red zone, and we will not be showing the games at our post,” local commander Tim Zvoncheck told Fox 8 in Cleveland. “It’s over for us.”

VFW Post 2743 in Norwalk, Ohio said they will not broadcast games until the “current anti-American displays by the players are stopped.”

“The players and the owners of the NFL have confused politics with patriotism,” they wrote in a Facebook message.

Americans have a choice – they can either stand with the VFW and the American Legion or they can stand with a bunch of overpaid, subversive cowards.