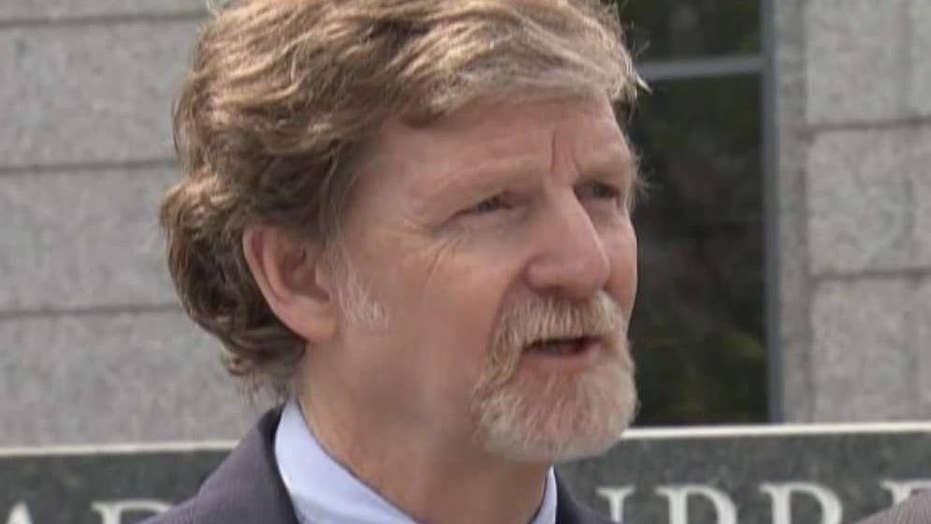 Baker sues Colorado over 'crusade to crush' him

Baker who refused to bake a wedding cake for a same-sex couple files lawsuit against Colorado.

The owner of the Masterpiece Cakeshop filed a federal lawsuit Tuesday against the Colorado Civil Rights Commission and Gov. John Hickenlooper claiming he has been bullied and targeted for his religious beliefs.

In June the Supreme Court ruled in favor of Jack Phillips, the owner of the cake shop, who had declined to create a cake for a same-sex wedding ceremony.

On June 26, 2017, the same day the Supreme Court agreed to take up the case, an attorney contacted the cake shop and asked Phillips to create a cake to celebrate a gender transition from male to female. The caller asked for the cake to be pink on the inside and blue on the outside.

Phillips, who is a devout Christian, declined the request because the cake would have expressed a message about sex and gender identity that conflict with his religious beliefs.

The attorney, identified in state documents as Autumn Scardina, filed a discrimination complaint with the Colorado Civil Rights Commission and the state notified Phillips that it had found probable cause.

The commission declared that Scardina “is a member of protected classed (sic) based on her sex (female) and transgender status (gender identity).”

“Jack is being targeted,” ADF attorney Kristen Waggoner said on the Todd Starnes Radio Show. “He’s being bullied by the state of Colorado.”

Waggoner said the attorney, who she called an LGBT activist, “essentially set him up.”

“It’s nothing more than hostility towards people of faith,” she said on the nationally syndicated radio program. “How could you say this kind of cake – blue on the outside, pink on the inside – how can you say that doesn’t have a message? It clearly has a message.”

The lawsuit accuses the government of anti-religious hostility.

“The Constitution stands as a bulwark against state officials who target people – and seek to ruin their lives – because of the government’s anti-religious animus,” the lawsuit states.

For more than six years Colorado has been on a crusade to crush Phillips. At one point, commissioners compared his belief to slave owners and perpetrators of the Holocaust.

“Even though Jack serves all customers and simply declines to create custom cakes that express messages or celebrate events in violation of his deeply held beliefs, the government is intent on destroying him – something the Supreme Court has already told it not to do,” Waggoner said.

Phillips and his attorneys are asking for punitive damages – and they deserve every single penny.

The court needs to send a very strong message: there is no place for anti-religious bigots in government. And any government leaders, whether elected or appointed, who use their office to abuse Christians or others based on their religious beliefs must be punished.

Phillips is a good and decent man. He serves all customers regardless of their sexual orientation or gender identity. He simply declines to create custom cakes that express messages or celebrate events in violation of his deeply held religious beliefs.

Phillips refuses to make Halloween cakes. He refuses to make custom cakes promoting alcohol or drug usage. And he refuses to create cakes that include disparaging messages – including those targeting people within the LGBT community.

And yet, a mob of social justice warriors – enabled by the Colorado Civil Rights Commission – will not let this man run his business in peace.