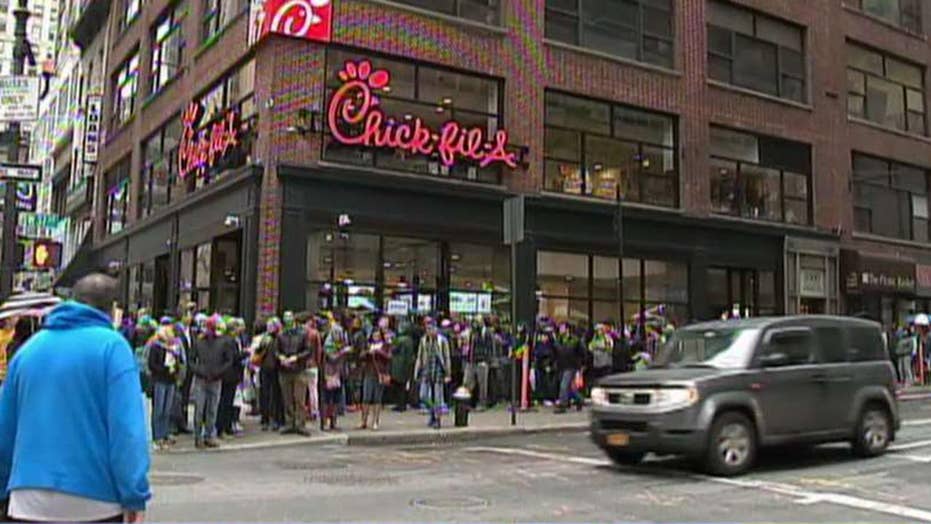 In recent days, The New Yorker has made some downright scurrilous accusations about Chick-fil-A, the unofficial chicken of our Lord.

The magazine warned that the beloved fast food restaurant was waging a “guerrilla insurgency” upon Gotham’s citizenry – plotting to evangelize the city by luring the masses with plump, juicy chicken breasts tucked between hot, buttered buns.

“The brand’s arrival here feels like an infiltration, in no small part because of its pervasive Christian traditionalism,” lamented Dan Piepenbring in an essay titled “Chick-fil-A’s Creepy Infiltration of New York City.”

Piepenbring seemed terribly disturbed by the news that a fourth outpost of the family-owned chain had recently opened – as if the Chick-fil-A Cows were about to stampede through the East Village.

“Its headquarters, in Atlanta, are adorned with Bible verses and a statue of Jesus washing a disciple’s feet,” he wrote. “Its stores close on Sundays.”

And like any progressive journalist, he offered up the obligatory Chick-fil-A is “anti-gay” smear. Untrue, of course, but whatever.

“The restaurant’s corporate purpose still begins with the words ‘to glorify God,’ and that proselytism thrums below the surface of the Fulton Street restaurant, which has the ersatz homespun ambiance of a megachurch,” he wrote.

And he was especially wary of the famed Chick-fil-A Cows.

“If the restaurant is a megachurch, the Cows are its ultimate evangelists,” Piepenbring declared.

Well, praise the Lord and drink some sweet tea!

“Its politics, its décor, and its commercial-evangelical messaging are infected with this suburban piety,” he wrote.

Well, America – the time has come for you to know the truth. The New Yorker caught us red-handed. The jig is up.

Chick-fil-A plans biggest and narrowest location ever in NYC

Chick-fil-A announced that they're building the 'largest Chick-fil-A ever' smack-dab in the middle of Manhattan's Financial District, but there's a catch. It will only be 15-feet wide

The truth is months ago a covert team of specially trained Southern Christians crossed the Mason-Dixon Line along with a herd of grammatically-challenged bovines.

Our mission was to convert the Yankee heathens with gracious Southern hospitality and delicious chicken sandwiches.

And our plan would’ve worked had it not been for those meddling members of the Mainstream Media.

After about a week of eating fried chicken and drinking sweet tea, New Yorkers had become so much more pleasant and docile. Brooklynites had even started waving at tourists with all five fingers instead of one.

Now, that is the power of the Gospel Bird.

So let not your heart be troubled, America – because glory, glory hallelujah – the War of Poultry Aggression rages on.