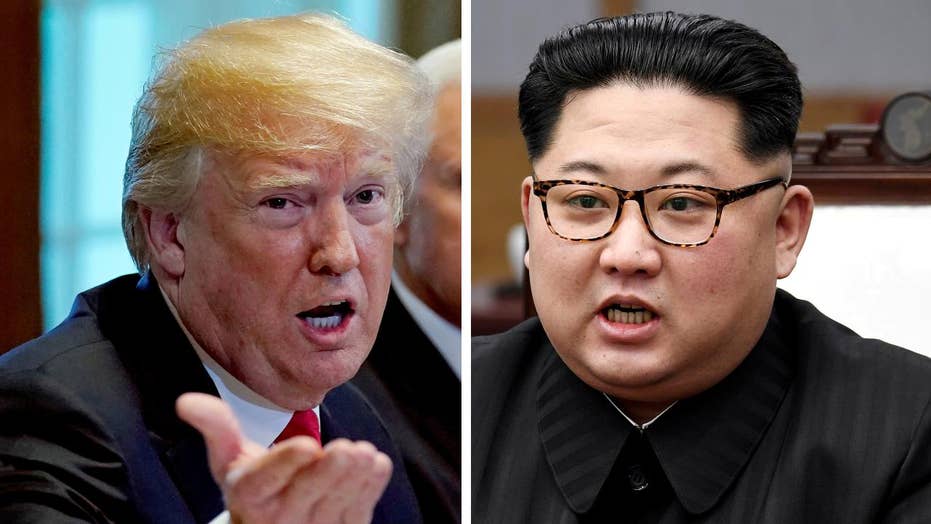 President Trump proved he is not messing around when it comes to his stance on North Korea; reaction on 'Hannity' to the decision to pull out of North Korea summit.

Following President Trump’s surprise cancelation Thursday of his planned June 12 summit with North Korean leader Kim Jong Un, the future of U.S. efforts to get North Korea to abandon its nuclear weapons remains very much in doubt. But the effort is not dead.

There are still a number of actions President Trump can take, which I describe below, that can lower the chances for a U.S.-North Korea military conflict and make North Korea less dangerous to its neighbors.

Realistically, the chances of President Trump getting everything he wants – the complete and verifiable destruction of all the North’s nuclear weapons and monitoring to ensure it permanently halts all nuclear development – are very slim. But that doesn’t mean he can’t work out a deal that will greatly benefit the U.S. and our allies.

North Korea, known for its fiery anti-American rhetoric – including threats of war and personal insults to U.S. leaders – was remarkably conciliatory following President Trump’s cancelation of the summit with Kim that was scheduled to be held in Singapore.

President Trump said in a letter to Kim on Thursday that he was forced to cancel the summit “based on the tremendous anger and open hostility displayed in your most recent statement” regarding the United States.

But rather than respond in anger, North Korean Vice Foreign Minister Kim Kye-gwan said in a statement Friday (Korean time): “We express our willingness to sit down face-to-face with the U.S. and resolve issues anytime and in any format.” He added: “Our commitment to doing our best for the sake of peace and stability for the world and the Korean Peninsula remains unchanged, and we are open-minded in giving time and opportunity to the U.S.”

That prompted a conciliatory tweet from President Trump, in which he said: “Very good news to receive the warm and productive statement from North Korea. We will soon see where it will lead, hopefully to long and enduring prosperity and peace. Only time (and talent) will tell!” In addition, President Trump told reporters the U.S. and North Korea continue talking.

So what happens next?

President Trump’s original instinct that the United States and North Korea should talk instead of fight was exactly right. But this was always going to be hard. It would be a mistake for the president to give up because the road is getting bumpy. There are no good options with North Korea, but diplomacy is better than war.

A Trump-Kim summit is just one step in the process, and we shouldn’t give it outsized importance. One meeting – no matter how high profile – was never going to be sufficient to resolve an issue as complex as North Korea’s nuclear program.

A delay in a summit may actually prove to be a blessing in disguise. Now President Trump has an opportunity to reset his approach. He could put future talks on a firmer footing by claiming less credit, demonstrating more patience, establishing a long-term process that can weather the ups and downs of a complicated negotiation, and identifying what would constitute a minimally acceptable deal.

To date, President Trump has treated the summit as an easy win. He oversold what he’s achieved so far, set outsized expectations and ignored the hard choices ahead. His posturing, along with cheerleading from the media, may have temporarily boosted his poll numbers at home, as Americans take comfort in positive developments after last year’s terrifying “fire and fury” war of words. But now reality is intervening.

History teaches us there are no quick wins in this kind of diplomacy. It took President Reagan and Soviet Premier Mikhail Gorbachev three years and as many high-level summits – along with countless lower level meetings – to reach an initial arms control agreement. The first two high-level summits produced good will, but no actual agreements.

The Obama administration negotiations with Iran that led to the nuclear agreement that was recently scrapped by President Trump also took years.

If President Trump wants to get a meaningful deal with North Korea, he needs to stop looking for a fast victory and begin preparing for a long slog ahead.

As someone who was involved with the U.S. nuclear negotiations with Iran, here’s my advice for President Trump:

First, President Trump will need to share more of the credit for a summit and reduction of tensions with Kim Jong Un.

President Trump’s claimed that “maximum pressure” scared Kim into coming to the negotiating table ready to give away his nuclear program. That prompted an angry response from the North Koreans and kicked off a war of words that led to the collapse of the summit.

To succeed with Kim, President Trump can’t depict the North Korean leader as surrendering to U.S. demands. That’s going to be a hard pill for President Trump to swallow, but it’s the smart move.

Look at how South Korean President Moon Jae-in proposed that President Trump get the Nobel Peace Prize, playing to his vanity and getting him invested in diplomacy. It was a clever ploy, and President Trump would do well to follow a similar playbook with Kim.

Reaching an agreement with North Korea also will take patience. That’s the opposite of how President Trump approached negotiations with our European partners over “fixing” the Iran nuclear deal. The Europeans were preparing a proposal that addressed President Trump’s stated concerns, but he wouldn’t wait and rushed to pull the U.S. out of the deal.

Second, President Trump needs to establish a long-term process that can weather the ups and downs of a complicated negotiation.

Talking about the summit as if it were the ultimate event made it hard for President Trump to stomach setbacks. Instead, the summit should be viewed as one of several steps in a lengthy diplomatic process.

One of the strange things about the planned Trump-Kim summit was the lack of preparatory work. Usually such high-level events are meticulously planned for months, with lots of lower-level meetings to work out key points of agreement. Many times there’s even a pre-negotiated text prepared for the leaders to sign at the summit.

President Trump should use this pause on the summit to kick off a robust round of negotiations led by Secretary of State Mike Pompeo that can achieve a degree of consensus.

Third, President Trump needs to grapple with the hard question of what is a minimally acceptable deal.

While President Trump wants complete, verifiable and irreversible dismantlement of North Korea’s entire nuclear program, achieving this goal may be impossible, no matter how much he threatens and cajoles the North Koreans.

What would President Trump accept short of total victory? He rejected the Iran deal because it wasn’t sufficiently sweeping – for instance, failing to cover Iran’s ballistic missile program and Iranian military interventions in Syria and elsewhere in the Middle East.

Unfortunately, while every president seeks to achieve all his goals, they often must make compromises. President  Trump needs to consider that a “less for less” deal – for example an agreement that freezes North Korea’s nuclear program but doesn’t irreversibly dismantle it – is more realistically achievable and better than nothing.

Even if it’s rescheduled, a high-level Trump-Kim summit will almost certainly not lead to a dramatic breakthrough that turns North Korea into a nonnuclear state in the near future. Successes take time and patience.

President Trump needs to be prepared for the highs and lows along the long, bumpy road ahead if he wants to secure a win. And he needs to accept that achieving some of his goals is better than achieving none of them.

YJ Fischer served at the State Department from 2012-2016, including as the assistant coordinator for Iran nuclear implementation. She was one of the writers of the 2016 Democratic Party platform and served on the Clinton-Kaine Transition Team.