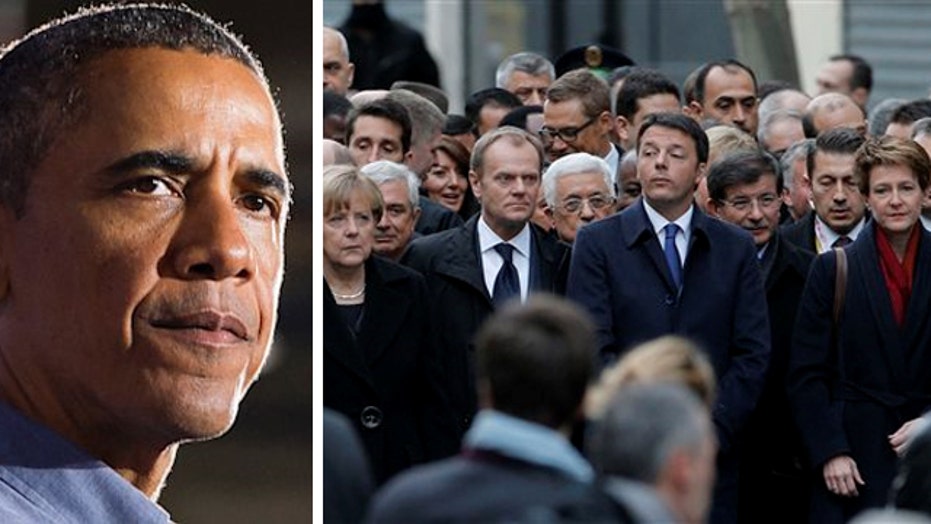 President Obama, Secretary of State John Kerry not present with other world leaders

Paris – There is someone missing in the now-famous picture of 40 heads of state and government leaders walking in the streets of Paris last Sunday, in an unprecedented show of solidarity with the French nation after last week’s terrorist attacks. We all know who it is.

And, frankly, most of us French people would have preferred to have President Obama or any other senior U.S. government official rather than Ahmed Davutoglu, the Turkish Prime Minister, or Victor Orban, his Hungarian counterpart, or Sergei Lavrov, the Russian Foreign Minister – those hypocrites whose conception of "freedom of expression" is not exactly that of Voltaire.

We received such an outpouring of sympathy from our American friends, Democrats and Republicans alike, that we know the United States could feel our pain. Just as we felt America’s pain after 9/11.

There is no good excuse for the U.S. physical absence (apart from the presence of Ambassador Jane Hartley, whose face is unknown to 99.99% of the French population) from last Sunday’s march.

We received such an outpouring of sympathy from our American friends, Democrats and Republicans alike, that we know the United States could feel our pain. Just as we felt America’s pain after 9/11.

Perhaps the White House did not realize that it would be a historical event? But for most world leaders, the decision to be present in Paris was a last minute decision.

It would not not have been easy for the U.S. Secret Service to improvise the appropriate security measures? Well, if Israeli Prime Minister Benjamin Netanyahu could do it, don’t tell us that Obama could not.

Maybe the president was not available ? Then Vice President Joe Biden could have altered whatever plans he had for Sunday. (Secretary of State John Kerry was in India and Indians don’t like being snubbed.)

Perhaps the president did not want to support the Charlie Hebdo people because he believes that "the future must not belong to those who slander the prophet of Islam" (his words at the U.N. General Assembly in 2012)? Not a good excuse – this was not about approving what the French cartoonists were doing, but showing solidarity in the face of terrorism.

Obama missed an opportunity to present himself as the leader of the free world in front of the continued menace of jihadi terrorism; but that is his loss. The mere fact that his presence was apparently not even discussed in the the White House is a confirmation that this administration does not feel as close to Europe as others did in the past; but we knew that already.

At the end of the day, I’m not sure that it really matters to us French in the current context. The debate after the march about Obama’s absence became a debate in France only because it was one in the United States. Some in the French government have whispered that Obama’s presence would have relegated President Hollande to the shadows.

But most importantly, we received such an outpouring of sympathy from our American friends, Democrats and Republicans alike, that we know the United States could feel our pain. Just as we felt America’s pain after 9/11.

In addition, there is absolutely no doubt that US-French cooperation on counterterrorism, which was already excellent, will be tightened even more. Immediately after the attacks, Washington offered support from its intelligence services. The White House has announced that it will convene a Summit on Counter-Extremism in February – that will be an opportunity to devise common strategies.
And you know what ? Maybe the U.S. administration’s biggest problem is that we discovered its embarrassing absence only after the fact.