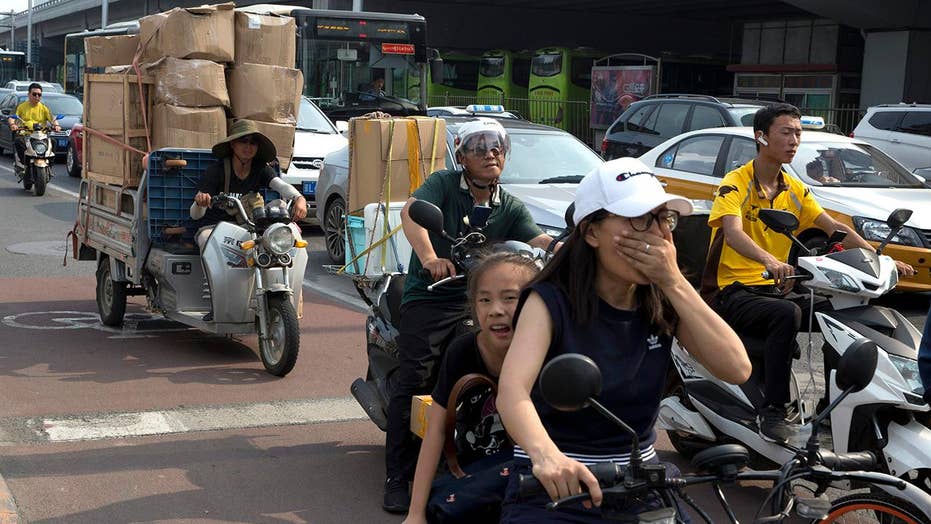 But things could get worse. The deterioration in U.S.-China relations could escalate and turn into a shooting war between two nuclear armed superpowers. In the worst-case scenario, this could result in massive casualties on both sides that could even lead to nuclear war.

Some will call such a statement pure hype – and I wish it was. But the facts lead us to a dark place when it comes to our relationship with China, which is becoming less of a partnership and more like a fight between mortal enemies looking to gain any advantage they can over the other.

We are all rightly concerned over North Korea’s nuclear weapons, Iran’s penchant for backing terror, and a rogue Russia that can’t seem to stop causing trouble all over the world. But these problems are nothing when compared to the China challenge. No other nation is as able to challenge American power on the world stage in the coming years.

Just look over the current state of affairs in the U.S.-China relationship. We see trade and military stand-offs, territorial disputes, and allies and partners of both nations squaring off or cybersecurity challenges. We see two nations on a collision course that seems more like the Cold War than the 21st century.

But before we stare war with China in the eye, let’s consider the budding trade battle between Washington and Beijing.

The Trump administration new duties on $34 billion in on Chinese goods amount to a 25 percent tariff. The duties impact items such as X-ray machine parts, water boilers, airplane tires and industrial parts.

China slapped its tariffs on $34 billion worth of U.S. products such as soybeans, electric cars, pork and other products.

But the Trump administration is not ready to back down, and, in fact, seems itching for a scrap.

A senior Trump administration official told me Friday: “We are ready for a trade war. If they want it we are ready to fight it. They need to remember America would win that so-called war, hands-down. Our market is bigger, our consumers richer – we are the global innovator. All we ask is for an even playing field from the Chinese. If they won’t agree to that, then they will have to deal with the consequences.”

When I asked what those consequences were, the official was quite clear: “China will pay a price. We will impose costs on them. They need to be ready for that. We are.”

And one thing is quite clear: Washington does hold an advantage in a trade fight – the numbers don’t lie. America imports much more from China than China imports from the U.S.

And while U.S. consumers and businesses would be hurt in a full-blown trade war, China stands to lose out on a big portion of the $462 billion in goods and services America imports from that nation. Considering the fact that the Chinese economy is already slowing down, Chinese President Xi Jinping would be wise to back off.

But something bigger is afoot here – a seismic shift in international affairs that has been dormant, until now. As I have explained in these very digital pages, the U.S.-China relationship was bound to become adversarial as soon the Soviet Union collapsed in 1991.

The Soviet threat was the one thing that brought both China and the U.S. together in the 1970s. Beijing saw the confrontation with America coming, and was already beginning to modernize its armed forces and recalibrate its military posture to take on the looming challenge from across the Pacific.

While China certainly did prepare for what it felt was an inevitable encounter with America, time and circumstances seems to put any sort of showdown. Beijing’s ascension to the World Trade Organization in 2001 meant economic ties would grow between both nations quickly – and geopolitical tensions are not good for business.

The Sept. 11, 2001 terrorist attacks also meant Washington was forced to shift its attention from Asia and back into the Middle East for over a decade. A true showdown with China was averted – at least for a while.

Unfortunately, it seems the chances of a real clash with China – and even a military confrontation – are now spiking. With America less involved in the daily squabbles of the Middle East and no longer keen on letting Beijing take us to the cleaners on trade, any number of issues could see these two superpowers exchange blows.

For example, China over the last few years has been pushing absurd claims that seek to turn the waters around its coasts into its own sovereign territory. From the East China Sea all the way to South China Sea, Beijing is determined to ensure that is the master of the seas – and push Washington out of the region for good.

To support such claims, Beijing has made some key investments in its military to win a war with America. The centerpiece of this is a missile arsenal that is second to none, and is of such a size that U.S. missile defenses would be overwhelmed many times over.

Firing from shore, China would hope to destroy most of America’s military bases around the region as well as sink any warships as far out as Guam. The worst part of all – thanks to treaty commitments with Russia – is that Washington is unable to counter Beijing’s missile weaponry on land.

And from there it gets even worse. Backed by a massive militia that is nearly impossible to match, a growing navy armed with aircraft carriers and an air force that is producing fighter planes that strangely look like our very own stealth aircraft – because China stole the technology – Beijing’s claims in Asia are only growing more outrageous.

At one point a few years ago, it seemed China was even making veiled claims to Okinawa, a clear part of Japanese territory that is home to a massive U.S. military presence. Such claims have even fostered parody articles saying that China has claimed most of the Pacific and Hawaii, almost fooling an entire conference at Yale University a few years ago.

History tells us that nations with divergent interests and competing geopolitical goals with enough proximity tend to clash. In fact, as Harvard Professor Graham Allison reminds us, in 12 out of 16 cases studies where a rising power competed with an established power – think China vs. America – war was the result.

Therefore, when talk of a trade war with China heats up, I think of a very different type of war. And you should too.