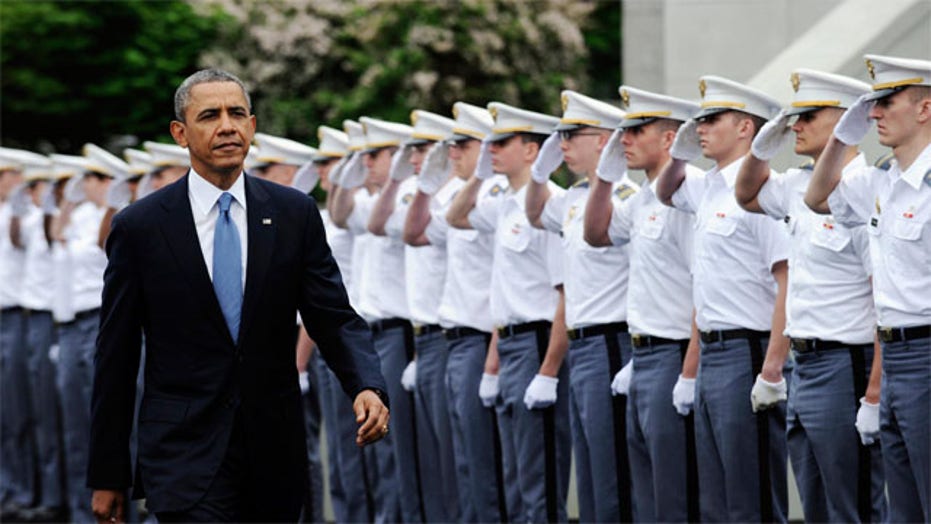 Did President Obama signal more leading 'from behind'?

For six years the world has scratched its head about President Obama’s foreign policy doctrine. Is it “leading from behind,” as he himself has said on occasion, stepping back in hopes that an international coalition will take charge? Is it using American military or economic power to topple dictators? Is it killing enemies with drone strikes and spying on allies with advanced technology? Is it using words instead of weapons?

With much fanfare, the president set out to set things straight on Wednesday by articulating a comprehensive Obama Doctrine in a major foreign policy address at West Point’s commencement ceremonies.

But it wasn’t a full-course meal at all; it was more like a Krispy Kreme donut. It seemed wonderful at first, beckoning in its sweetness, so yummy you wanted to gobble it up. But after it was finished, it was all air and empty calories, leaving you just as hungry as before you took that first bite.

Heavenly for a moment, but once that moment passes, you’re just as hungry as before. Only afterward do you realize you’ve ingested hundreds of calories for a momentary sugar high.

On the surface the president’s speech sounded eminently sensible: We “will use military force, unilaterally if necessary, when our core interests demand it – when our people are threatened; when our livelihoods are at stake; when the security of our allies is in danger.” But we are not going to invade every country that harbors terrorists, nor necessarily rush in to every crisis. We’re going to enlist partners, and work through international institutions.

Of course! What idiot wants to go to war? And isn’t everything better when done with friends?

The speech was filled with the silent echo of the Obama administration’s theme song, “Blame Bush.”

Everything the president said sounded good. Sadly, it bore no resemblance to what the president has been doing for the last six years.

He expanded the Afghanistan war effort, though our core interests were not involved and he didn’t believe our efforts would succeed.

He went to war against Libya, toppling the government and leaving chaos in its wake, on the mere possibility that Qaddafi might kill innocent Libyans.

Yet Obama refused to move against Syria’s Bashar al-Assad, who gassed his own people and murdered more than 100,000 innocents, including women and children. Obama has tried, but failed, to enlist partners to stop the slaughter in Syria, and his efforts at getting the U.N. to impose severe sanctions on Russia and Iran have failed.

As for “using force…when our people are threatened”? What about his administration’s failure to provide adequate security to our people in Benghazi despite known terrorist threats, and then standing by helplessly while they were attacked and four were slaughtered?

Krispy Kreme claims the “batter is the best part.” Same with an Obama speech. It’s all about what’s on the outside, not what’s inside.

He claimed to have ended the Iraq and Afghan wars that he inherited. He has ended them, not by winning them, but by walking away. In truth, those wars were probably not “winnable” in any real sense of the word, but we’ll never know. They began as Bush’s neocon fantasies and ended as Obama’s incompetent tragedies.

And while Obama was busy offering up Krispy Kremes, others were eating his lunch. He claims Putin was foiled in Ukraine because he mustered an international community to criticize him, but he neglects to mention that Crimea is now part of Russia and eastern Ukraine is under its operational control. The other peoples along Russia’s border, in countries like Poland or Romania or the Baltics, certainly don’t think Putin is finished.

Obama honestly believes his interim deal with Iran has stopped Tehran’s nuclear weapons program in its tracks. But as Obama delivered his West Point speech, Iran’s supreme leader, Ayatollah Khamenei, told his nuclear scientists that while the negotiations with the West will continue, “the activities of the Islamic Republic of Iran in the field of nuclear research and development won’t be halted at all.”

And in a stunning international development, the Russian and Chinese presidents toasted each other for ending nearly four decades of enmity to join together in an anti-American alliance. In the 1970s, the only threat America faced was the Sino-Soviet alliance. President Nixon drove a wedge between the two in 1972 with his opening to China. The only remaining existential threat to America was the Soviet Union, and President Reagan engineered its collapse in the 1980s. For the last generation the United States has enjoyed unprecedented peace and prosperity, in no small measure because of it.

Now the situation has been reversed, with China and Russia once again in alliance. The Obama administration hardly noticed.

The tragedy of the Obama foreign policy is it didn’t have to be this way. Krispy Kremes weren’t the only thing on the menu. It was never a choice between going to war and doing nothing, between eating Krispy Kremes and going hungry.

If America chooses, we can develop our own energy resources and not be pressured into wars in the Middle East. Cheap energy will restore our economy and wither the economies of our adversaries. It will give us the means to help our allies without sending in the Marines. It will give us more than the Obama options of going to war or doing nothing.

The age of Obama and his feckless foreign policy is drawing to a close. What comes next will determine whether America once again restores its economy, and once again basks in the warm light of keeping the peace through strength.