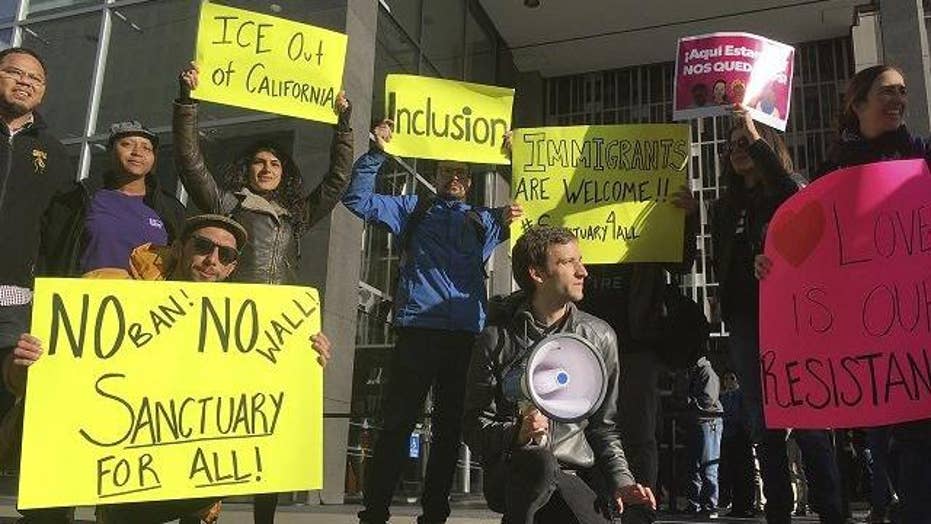 President Trump promises to build the border wall amid a growth of sanctuary cities in America.

What’s more important: promoting leftist social causes or protecting American lives? The answer is obvious. But unfortunately, some cities in the United States – such as Lawrence, Mass. – have chosen politically correct politics over the safety of their residents.

By choosing to implement “sanctuary city” policies that prevent the federal government from detaining and deporting illegal immigrants accused or convicted of crimes, these cities have opted to keep dangerous people in their communities – which in turn helps perpetuate the ongoing opioid epidemic.

Lawrence has been a sanctuary city since 2015, when the city council voted to “limit cooperation with federal authorities seeking illegal immigrants.”

Officials in Lawrence refuse to inform federal authorities when illegal immigrants accused of committing local crimes are arrested, and won’t even turn over illegal immigrants who have been convicted of crimes after they have completed their jail sentences.

At the beginning of this month, the U.S. Justice Department arrested and indicted dozens of people in Lawrence who were accused of being involved in a major drug smuggling and distribution operation. This effort included 35 indictments for “drug, firearms, and immigration offenses.” One third of those indicted are foreign nationals.

The Immigration and Customs Enforcement (ICE) agency arrested 11 illegal immigrants, all of whom have prior criminal convictions. Federal law enforcement officers are still searching for nearly two dozen more individuals.

The arrests come on the heels of a growing drug problem in Lawrence, which U.S. Attorney Andrew E. Lelling calls “a clearing house for illegal drugs pouring into New Hampshire and Maine via (Interstates) 93 and 495.”

A part of the Justice Department’s Project Safe Neighborhoods Initiative, the drug bust seized 20 pounds of fentanyl – an extremely potent drug that Lelling said would be enough to “kill half the state” of Massachusetts.

These indictments reflect an overlooked problem in the drug war: the connection between sanctuary cities and illegal immigrants who are accused or convicted of crimes involving drug trafficking.

Lawrence officials decided it would be better to release illegal immigrant criminals and accused criminals back into the community, where they can commit more crimes, rather than allow their deportation to their native countries.

Since July 2017, the entire state of Massachusetts has been a so-called “sanctuary” for criminal illegal immigrants who seek refuge from the federal government.

Lawrence was warned about its sanctuary policy in a 2017 U.S. Justice Department letter to its police chief. Mayor Dan Rivera, incredibly, replied that Lawrence did not “harbor criminals.”

President Trump also singled out Lawrence in a speech in March when he said that ending “sanctuary cities is crucial to stopping the drug addiction crisis.”

Rivera dismissed the president’s criticism, claiming that Trump was “creating boogeymen where we need solutions.” The numerous federal arrests of the “boogeymen” that included illegal immigrants with prior criminal convictions who were bringing one of the most dangerous illegal drugs into Rivera’s city shows just how wrong the mayor is.

Adopting sanctuary policies makes cities such as Lawrence less effective in dealing with the opioid crisis. As Jessica Vaughan of the Center for Immigration Studies correctly pointed out in a February hearing before the U.S. House Judiciary Committee, “federal agencies have unique immigration authorities that can be particularly effective in addressing the problem of opioid trafficking.”

Vaughan added that “the prospect of removal, while not truly punishment compared to a prison sentence, can be a powerful incentive for criminal aliens to cooperate with authorities.”

Sanctuary cities, Vaughn said, are “enabling some of the criminals who are distributing the opioids to remain in the communities, where, like American citizen criminals, they often re-offend.”

In the last few years, Massachusetts has seen record drug overdoses. Fentanyl, reportedly the drug of choice for those indicted in the most recent sweep, has been present in the toxicology reports of 89 percent of opioid-related deaths so far this year. While most of those who risked taking fentanyl-laced drugs used to be heroin users, it is now a risk for users of other illicit drugs, due to the increase in fentanyl-laced cocaine.

In her testimony, Vaughan said the U.S. Drug Enforcement Administration has reported that “approximately 80 percent of the illegal opioids sold in this country are brought in by foreign criminal organizations, primarily the Mexico-based drug cartels.”

The link between sanctuary policies and the ongoing opioid crisis, according to ICE, is quite extensive.

In a report published this past summer, ICE determined that Massachusetts sanctuary policies “often result in the release of potentially dangerous criminal aliens back into the community because ICE officers are not notified of pending releases from state custody.” This includes “countless removable aliens (who) have been arrested for contributing to the opioid epidemic in Massachusetts, mostly by trafficking and distributing Class A drugs” including “heroin and fentanyl.”

The report also says that these “aliens are routinely released on bail from local jails” – and federal authorities are “not notified about the release.”

According to ICE, this lack of cooperation by Massachusetts authorities (which would include Lawrence) “has significantly contributed to the continued distribution of dangerous drugs.”

To illustrate this point, the ICE report gives examples of the reckless roadblocks the agency faces. In January, ICE issued detainers for two illegal immigrants arrested in Worcester, Mass., for “possession with intent to distribute Class A and Class B (Heroin and Cocaine).” Due to the city’s sanctuary policy, neither detainer was honored. The illegal immigrants were released by local authorities and “remain at large.”

So what would you prefer? Do you want your city to implement a sanctuary policy that releases illegal immigrants who are criminals and accused criminal aliens back into your neighborhood? Or do you favor cooperation with federal authorities so that when such dangerous people are arrested or are about to be released after serving a jail sentence, they can be picked up and deported?

One of these policies endangers the safety of the public. The other will help make our neighborhoods safer and help curb the flow of illegal drugs that are poisoning and killing unprecedented numbers of Americans.