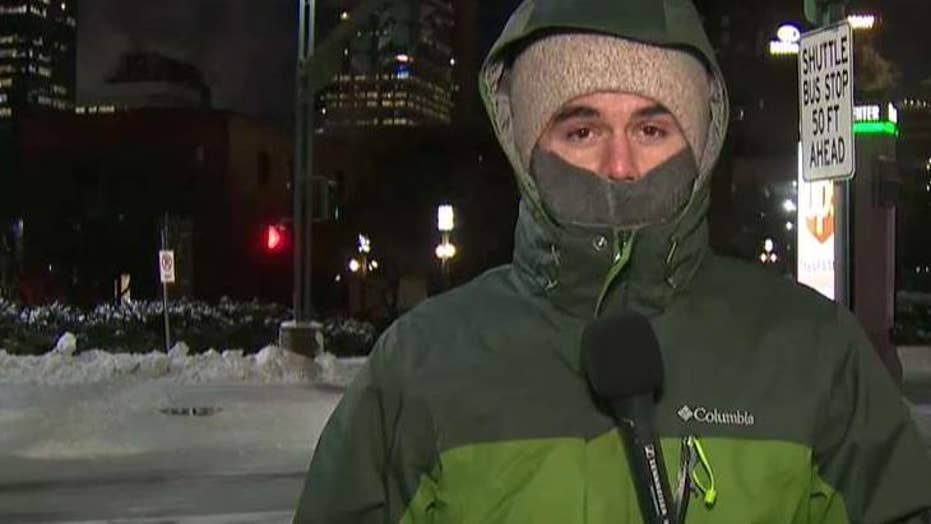 What the AccuWeather service calls “the coldest weather in years” is gripping the nation, from Wisconsin to Alabama. The temperatures, AccuWeather says, “will put millions of people and animals throughout the Midwestern United States at risk for hypothermia and frostbite to occur in minutes during the final days of January.”

The only real defense against Winter Storm Jayden is fossil fuels—the source of the vast majority of electricity that Americans will need to stay warm. Pie-in-the-sky talk about renewable energy won’t warm hearths and hearts during this storm, because the sun isn’t shining all the time and the wind capacity simply isn’t there.

So, Americans will reply on fossil fuels—the much-demonized source of concentrated energy – to power our economy and saves lives, literally.

Let’s take two states as examples. Illinois is near the geographical center of the polar vortex. As of 9 a.m. Tuesday morning, the temperature was 5 degrees Fahrenheit, with an expected low in the next 24 hours of 23 below zero. Those winds coming off Lake Michigan are dropping the wind chill to as much as 55 below zero through Thursday morning.

But renewable energy is sitting this one out in Illinois. In 2016, wind and solar energy contributed just 6 percent of Illinois’ electricity supply. A respectable 52 percent came from Illinois’ aging nuclear power sources, but those generators are in trouble financially and politically.

That means nearly 40 percent of Illinois’ electricity came from coal, natural gas and oil. And every Illinoisan, from Waukegan to Carbondale, is thankful for that this week.

In New York, Albany isn’t getting hit as hard as Chicago; its low temp on Wednesday was forecast to be only 8 degrees below zero. By Friday, it should be a balmy 20 degrees.

Of course, the Empire State generates more hydroelectric power than any state east of the Rockies, supplying about 20 percent of that state’s needs (thanks, Niagara Falls!), but wind and solar make up only 4 percent of New York’s electricity portfolio.

These numbers will change, of course, as solar and wind technology improve. And both Illinois and New York have clear goals for transitioning to more renewable power in the future. Illinois Gov. J.B. Pritzker has pledged to achieve 25 percent renewable energy by 2025 and 100 percent by 2050. (Environmental groups say the state is unlikely to reach even that first goal.)

Yet the cold, hard facts are difficult to ignore in weather like this.

Governors can’t mandate the advances in storage capacity and wind and solar efficiency we’ll need to reach those goals. What they can do—by imposing strict regimes that lead to the closing of reliable fossil fuel-powered generators is drive up the cost of electricity (New Yorkers pay about 45 percent more per kilowatt hour than the national average, for example.

Which brings us to New York Democrat Rep. Alexandria Ocasio-Cortez’s Green New Deal, which would double down on the policies that are making power more expensive—and less reliable—in many parts of the U.S. Because the freshman member of Congress has offered few specifics, we’re left to speculate on what, exactly, the Green New Deal will entail.

It’s likely to be President Obama’s Clean Power Plan Redux, with a little social justice thrown in (she tends to toss in income inequality and higher taxes on the rich).

Yet Harry C. Alford, of the National Black Chamber of Commerce, warns that the Clean Power Plan (even without higher taxes) would have increased poverty among blacks by 23 percent and Hispanics by 26 percent, due to “severe and disproportionate economic burdens.” That’s because lower-income families spend a larger portion of their income on electricity and transportation fuel, not to mention food, clothing and housing, which are also affected by energy pricing).

Winter Storm Jayden should wake us up to some cold truths. Today, fossil fuels stand between us and the icy chill of winter weather. Policies that try to chase them from our energy portfolios prematurely are doomed to fail—and to leave American families, particularly the poorest among us, out in the bitter cold.

Robert Henneke is lead counsel for the Individual Plaintiffs in the pending Texas v. Azar lawsuit. He serves as general counsel and litigation director at the Texas Public Policy Foundation. @robhenneke