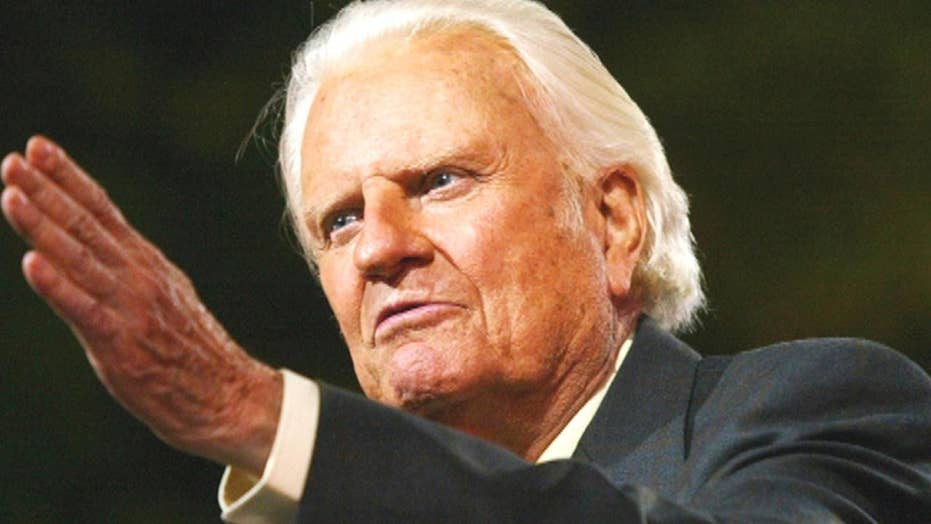 In a 2010 interview with Fox News, Billy Graham shared his reflections on death, his regrets, becoming a preacher, befriending the Bush family and more.

Early Wednesday morning, the Rev. Billy Graham passed away at age 99 at his home in Montreat, N.C.

In response to the news of his passing, national and international leaders simultaneously grieved his death and celebrated his life. And for good reason.

He should be remembered for his global reach, having preached live to approximately 215 million people in more than 185 countries or territories, and via television and radio to hundreds of millions more.

He should be remembered for his personal influence, having met and prayed with every U. S. president from Dwight Eisenhower to Barack Obama, and having preached at funeral services for Presidents Lyndon Johnson and Richard Nixon.

He should be remembered for the way his ministry spanned across many of America’s public divides. Graham was recognized by many Americans—Republican and Democrat, black and white, North and South—as “America’s pastor.”

We shouldn’t be sad for Billy Graham. In his own words, “Someday you will read or hear that Billy Graham is dead. Don’t you believe a word of it. I shall be more alive than I am now. I will just have changed my address. I will have gone into the presence of God.”

He should be remembered for his opposition to racial bigotry, having refused to preach to segregated audiences. For this reason, Dr. Martin Luther King, Jr. counted Graham a friend and an ally, once remarking, “Had it not been for the ministry of my good friend Billy Graham, my work in the Civil Rights Movement would not have been as successful as it has been.”

He should be remembered for the love and faithfulness that characterized his marriage to Ruth McCue Bell, to whom he was married for 64 years. His reputation was unblemished by sexual or financial scandals.

But more than anything, he should be remembered for the gospel. It is this gospel to which he devoted his life and ministry.

What is the “gospel” Billy Graham preached?

The Christian gospel is the announcement that two thousand years ago Jesus of Nazareth was crucified. Powerful members of the religious, political, and military communities colluded to strip him naked, mock him publicly, and crucify him. And it is the announcement that, even while powerful men were conspiring to kill the Son of God, God himself was acting to save the world from itself, once and for all.

But what does Jesus’ crucifixion have to do with him saving the world? As the Bible teaches, Jesus' crucifixion and resurrection accomplished three things, which together provide an explanation for why Billy Graham devoted his life to preaching about them:

On the cross, Jesus suffered so that we could be delivered from suffering.

Unlike other religions Christianity teaches that all of us are born with a tendency to sin. Like Adam and Eve, we refuse to recognize God as God and we break his law repeatedly. Because God is the universal King and ultimate Law-giver, our sins are mutinous; they represent an attempt to steal his kingship and replace his laws. For that reason, each of us deserves death as the penalty for our law-breaking.

Yet the Bible also teaches that God loves us and does not want us to suffer the penalty of our sin. For that reason, he took on a human body and came to earth as Jesus. When he did that, he “traded places” with us. He lived the sinless life that we should have lived, and died the death that we deserve to die. He took our guilty record, died for it, and offers us his perfect record in return. That is why the apostle Paul declared that “there is therefore now no condemnation for those who are in Christ Jesus” (Rom 8:1).

Through the cross, we can be reconciled to God and each other.

Because of our sins, we alienate ourselves from God and others, but Jesus saves us from our sins in order to mend those relationships. That is why the Bible says, “For it pleased the Father that . . . by Him to reconcile all things to Himself, by Him, whether things on earth or things in heaven, having made peace through the blood of His cross” (Col 1:19-20). In fact, Jesus’ reconciling powers will cause all relational barriers to be torn down, including the barriers of ethnicity and nationality (Rev 5:9-10).

Because of the cross and resurrection, we have hope for the future.

The Bible connects Jesus’ crucifixion with his resurrection. After Jesus suffered on the cross, he was buried, but on the third day he rose from the grave! When he rose from the dead, he not only confirmed his divinity but declared that he would return one day to make things right. He will return to disestablish evil, sin, and death from their artificial throne, and establish himself as the true King over a kingdom characterized by justice, peace, and love (Rev 21-22).

For these reasons, Billy Graham invited anybody who would listen to embrace Jesus as the Savior that he is, to trust in him alone for our salvation. He alone can save (Acts 4:12) and there is no sinner too bad for him to save (1 Tim 1:15).

For these reasons, we shouldn’t be sad for Billy Graham. In his own words, “Someday you will read or hear that Billy Graham is dead. Don’t you believe a word of it. I shall be more alive than I am now. I will just have changed my address. I will have gone into the presence of God.”