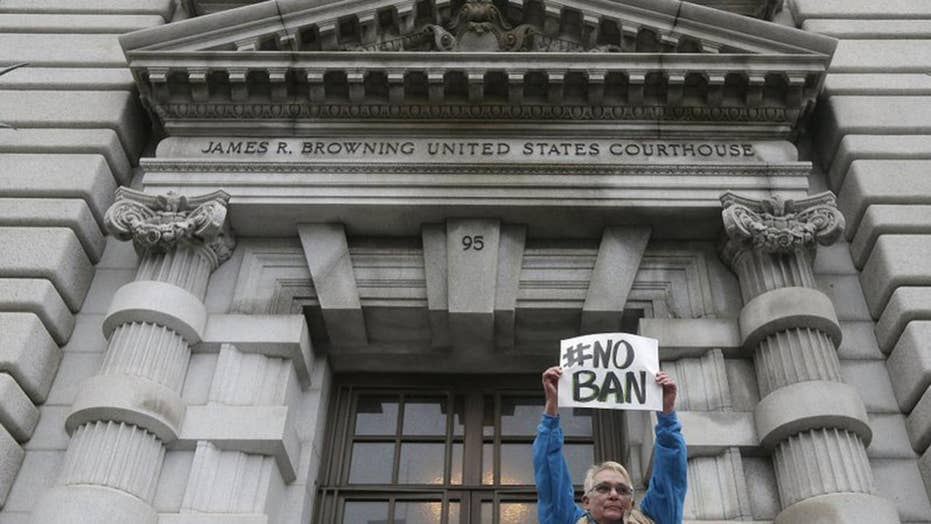 The U.S. Court of Appeals, Ninth Circuit, has issued one of the most ill-conceived, poorly reasoned opinions in memory, even for that notoriously activist Circuit.  It ties federal law in inscrutable knots, misses big points, and blurs little ones.  It will not sit well with most Americans, for good reason.

Whether motivated by antipathy for the president, love of limelight, or just fundamentally misconceiving their role, the Court stumbles into embarrassing contradictions, makes baseless assumptions, shows indifference to law and history.  Other than that – it is a fine piece of work.

Where does one begin?  The question was not whether to wander freely through headlines.  The job was simple:  Decide whether, given the President’s Article II prerogatives and authority as “Commander in Chief,” a single federal judge – one of 3,294 – can issue a sweeping, conclusory, nationwide “temporary restraining order” (TRO) halting implementation of a national security Executive Order (EO).

If the TRO was unjustified, the Ninth Circuit was duty-bound to issue a “stay,” effectively ending the TRO and permitting implementation by the Department of Homeland Security of the EO.  Instead, they ducked, and insensibly upheld the TRO.

They played to the street, and tried a legalistic putsch.  Fortunately, the opinion is likely to be reversed by the Supreme Court – but that will be a while.  The White House could, in the interim, counter-punch with another EO.  Either way, the appellate court seemed intent on a political smack down of the President, making headlines, even if that required twisting the law.  Here is how it went down.

For starters, they might have asked whether the underlying TRO – not the stay – was grounded in three legal requirements – irreparable harm, likelihood of success, and public interest.  Did the States meet this test, required to block a president’s temporary restriction on travel to the US from seven terror-riven countries?   Did the States show any permanent harm, likelihood of winning on constitutional issues, balance public interest?  The States could not do this, and the court never asked.

The court focused instead on whether the US Government had met these requirements for a stay of the unreasoned, indefensible TRO.  In other words, the appellate court put the burden on the United States, not on the States that had snatched a blank TRO, nobbling the president.

Things got darker fast.  The court asked what “hardship” might be produced if they did not grant the stay – and answered themselves, none.  If President’s objective was to stop accidentally importing terrorism from countries where it is plentiful, what about the “hardship” of future terrorist attacks?

Did the court pause to track terror events in Europe from those countries?  No.  Did they note the public striving by ISIS to get into America?  No.  Did they consider “hardship” suffered by victims of foreign-inspired terrorism in Boston, San Bernardino, Orlando, Texas, Minnesota, New Jersey, New York, Ohio, Pennsylvania, Oklahoma, even Seattle – where the district judge sits?  No.   How much risk is too much?  How many hairs should we split?  Who should split them?   Why not the President?

True, some visas were cancelled for those from the seven terrorist countries.  But the White House clarified the issue for permanent residents, and noted the order was temporary.  Apparently not enough.  So, where was all this permanent, “irreparable damage” to the States?  Their “economy” and “public universities.”  Why, because students and professors were delayed in return?  How many were really from Libya, Iraq, Iran, Syria, Sudan, Somalia, or Yemen?  How does the Court know no terrorists? Finally, the court says:  Universities “suffered the loss of visa application costs.”  Exactly 160 dollars per visa.  And … for this we risk national security?

Darker still.  The court says:  The EO “purports to prioritize refugee claims of certain religious minorities.”  Stop.  The court inserted that word “certain” – that word is not in the EO.  This actually matters.  The EO does not give priority to “certain” groups, but to all religiously persecuted minorities.

Moreover, “prioritizing” foreign entrants and “religious minorities” violates nothing.  Those with a “well-founded fear” of religious persecution often get priority.  Christians and Jews from the Soviet Union, Muslims, Hindus, and Buddhists fleeing persecution elsewhere, 100,000 from Vietnam.  Prioritizing national origin and religious persecution as a basis for entry is NOT new.

Then on to “standing.”  States have none, but the Ninth Circuit gave it anyway.  Asserted harms were minimal and temporary, but the appellate court made them substantial and permanent.  States asserted the necessary “personal stake,” only states possess no “personal” rights under the Constitution.  Oops.

Talk about “vetting” – because they don’t.  Having helped vet Iraqi and Afghan police recruits, it is hard.  There are no records.   The process is arduous – and slow.  Some get rejected, others find tribal or family proofs, go also through long interrogations.   Note:  This IS “due process” – and it takes time, months.  So, what about that?  Did the court ask?  See the due process?  No.

What do these judges know of vetting, anyway?  Or of intelligence behind the EO?  Did they ask before denying the stay?  No.  Have they ever – any of them – seen the process, met a vetted refugee, or been to any of the seven countries?  Those around the President have.  Did they ask in camera insight – or force the lower court to, before denying the stay of a fake TRO?  No.

The court cites Baker v. Carr for a procedural proposition.  Irony of ironies.  That case relates to non-justiciability – the inability of courts to review “political” decisions, only they overlook that proposition.  Arguably, this case fits the doctrine.  Do they discuss that?  No.

The Court tells Justice they claimed this case was “unreviewable.” That is not what the United States actually said.  In oral argument, they said it was reviewable for “bona fides.”  In other words, did the President reach the necessary “significant risk” determination, not whether he was right on national security?  That is not their job.  Another error.

More darkness.  The court defaults to conclusory statements and “declines to modify the TRO,” already admitted not to be a TRO.  The court adds they are doing this to protect “those in the United States unlawfully.” Wow!  So the counter-veiling interest, which outweighs the President’s national security determination, is partially for those here “unlawfully?”  Convoluted in the extreme.

That is where they leave us – in the dark, looking for light.  They did not help America forestall terrorism, help Americans understand larger issues.  They lofted legal platitudes, with embarrassing contradictions, calculated for headlines, more controversy, and placing the president in the wrong.  This will not stand.

This opinion will accelerate discussion of breaking up the oversized, quixotic Ninth Circuit.  It will set the stage for return to light – an appeal to the US Supreme Court, possible reissue of the EO.   Meantime, we can all pray that we do not encounter another terrorist event in the near term – of the kind thwarted this week in Turkey, planned by un-vetted terrorists from Syria, one of those seven countries about which we need not worry.