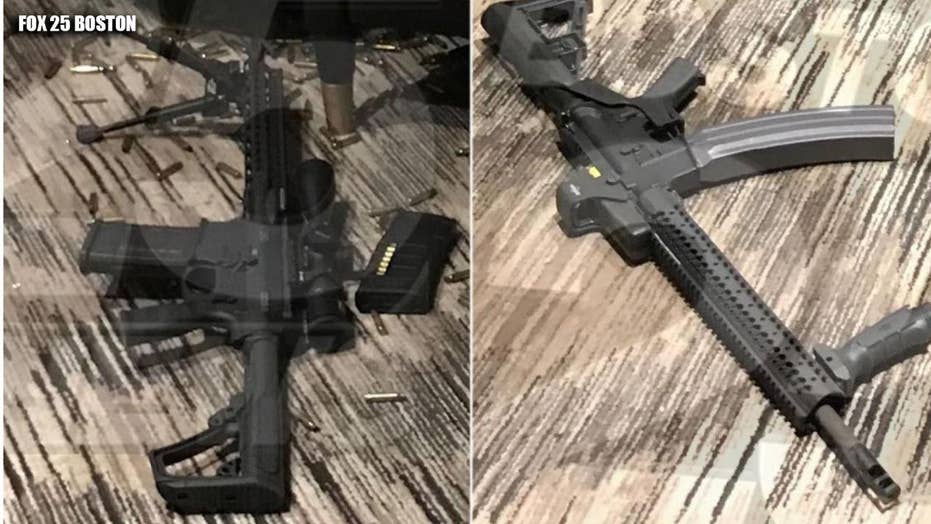 Vegas shooter: What we know about his deadly arsenal

How many rounds does an AK-47 hold, and what types of weapons were found in the hotel room of the Las Vegas shooter? Watch the video for answers.

The American political left and mainstream media pundits at large do not understand guns. They are not educated about them and they refuse to learn about them. They could not tell you the difference between an automatic or semi-automatic firearm. They don’t understand what a suppressor does or does not do. It’s safe to say most of them have not heard the term “bump stock” until this week.

What they are, however, is convinced that we need more laws to prevent mass shootings like the one in Las Vegas from happening ever again – and they will host guest after guest on their shows who are not experts in firearms, or firearm training, to lecture the American public at large about why this needs to happen.

If anyone out there on that side of the aisle is wondering why your pleas to “do something” are falling on mostly deaf ears,that would be why.

It’s a largely one-sided debate happening on cable networks, and it is why those on the right – including everyday Americans and lawful gun owners not responsible for mass shootings or breaking gun laws – largely ignore what is blaring out at them from their televisions and social media.

Column after column is fired off about how much the National Rifle Association donates to congressional candidates (spoiler: it’s not much, about 200K a year). For every breathless declaration that the NRA has blood on their hands, it’s worth noting more journalists have committed mass shootings in this country than NRA members.

Firearm experts in media such as Washington Free Beacon’s Stephen Gutowski (also an NRA-certified instructor), National Review Online Editor Charles Cooke and Federalist co-founder Sean Davis are sidelined from national cable news and Sunday show appearances in favor of guests who suggest suppressors are used by hunters to prevent deer from hearing a fired shot. Gutowski, Cooke and Davis will never be invited on Jimmy Kimmel or Stephen Colbert’s shows to clear up the falsehoods being spread to mass audiences or to defend the second amendment of the United States Constitution.

The Las Vegas narrative jumped to ludicrous speed shortly after the massacre ended when losing presidential candidate Hillary Clinton demanded that we “put politics aside” right before immediately politicizing the shooting in the same tweet. She then went on to state, “Imagine the deaths if the shooter had a silencer, which the NRA wants to make easier to get.” Mrs. Clinton’s claim that firearm suppressors render guns “silent” was given three Pinnocchios by Glenn Kessler of the Washington Post. This of course didn’t matter. Kessler’s fact check went mostly ignored on social media. Clinton’s false tweet about firearm suppressors garnered more than 58,000 retweets on Twitter. Glenn Kessler’s fact check? Thirty.

Kimmel chastised Paul Ryan and the GOP Congress for not enforcing laws about guns that literally do not exist.

Within hours of the Las Vegas shooting, Senator Chuck Schumer was pushing the narrative that the GOP was ramming through legislation to de-regulate silencers. This was also a fabrication. Reporters began shouting questions at Paul Ryan about “Silencer” legislation. The 64-year-old shooter in Las Vegas did not use a suppressor but Democrats have found their shiny object to fixate on – much like the no-fly list post-Orlando – which had nothing to do with the actual tragedy at hand.

Democrats would be better off offering up legislation banning high-rise hotels in attempting to make a connection to the Las Vegas shooting than they would suppressors or background checks.

America’s foremost health care expert, Jimmy Kimmel, once again repeated long-debunked Democrat talking points in another tearful monologue (Las Vegas is his hometown so it’s hard to berate him for showing emotion). Kimmel chastised Paul Ryan and the GOP Congress (again) for not enforcing laws about guns that literally do not exist. These include the so called “gunshow loophole,” an online background check loophole and allowing mentally ill individuals (a move supported by the ACLU) from purchasing firearms. All of these claims have been debunked and yet are ignored by fact-checkers at mainstream outlets and cable news pundits. Stephen Paddock did not have a criminal background, prior record and no evaluations of suspect mental health. So what then?

New York Times Magazine’s Ana Marie Cox tweeted “Man, imagine if the right believed in unfettered access to the ballot box as much as they believed in the right to own guns.” Her sudden support of background checks and voter ID laws (two things needed to purchase a firearm in America) are a welcome surprise.

Politico reporter Dan Diamond tweeted out an email announcement from The American College of Physicians calling for a ban on all automatic and semiautomatic weapons. What Diamond did not reveal is a ban on semiautomatic weapons would include most handguns. I’m not sure members of media know this fact, and more importantly, have demonstrated zero willingness to learn. But sure, let’s put them in charge of the health care debate.

And this is where the credibility chasm exists in media as they continue to parrot Democrat narratives on guns. As the sun rose on Vegas the morning after, and before Americans could grasp the facts of what had happened, Democrat leaders including Hillary Clinton, Elizabeth Warren, Chuck Schumer and their celebrity Hollywood base were already pointing fingers and placing blame without facts and without knowledge.

Law-abiding, gun-owning Americans will not be lectured to about a national tragedy they had nothing to do with, and they certainly won’t be lectured by elitists in media who refuse to understand even a basic grasp or terminology about a sacred constitutional right.

And until they do, we will refuse to have that “conversation” the left and the media keep telling themselves needs to happen.