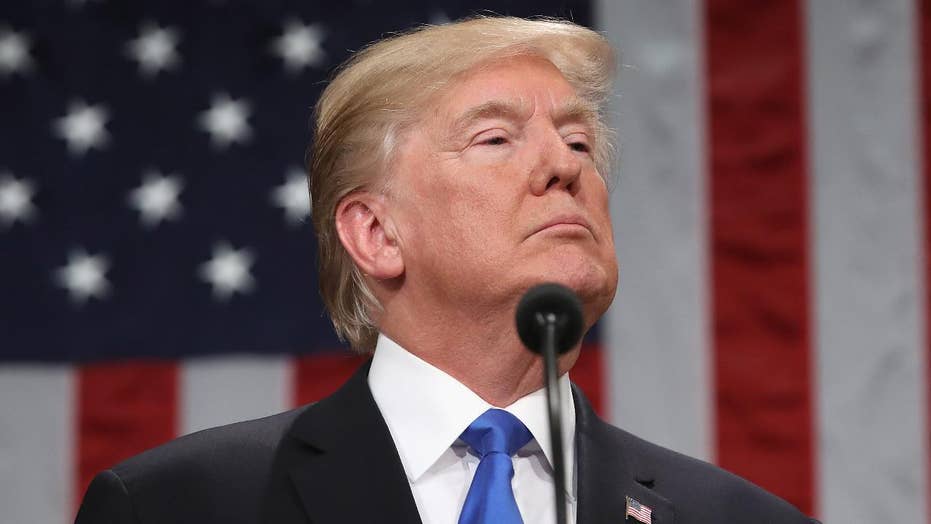 Was President Trump's SOTU an olive branch or victory lap?

President Donald Trump’s first State of the Union was much like the first year of his presidency. He thrilled his Republican audience and angered the Democrats. And many in the media naturally responded with crazy or hateful comments. The media’s war on Trump never lets up one second. All three broadcast networks led their websites with “fact checks” of the speech.

CNN host Van Jones topped the evening with yet another insane anti-Trump moment. The man who complained the election was some sort of “white lash” on election night, now blistered Trump on immigration and the Dreamers issue. “He was selling sweet-tasting candy with poison in it,” said Jones, who was recently given his own CNN show.

His comment was only the worst of many. CNN White House reporter Kate Bennett pretended to wonder why First Lady Melania Trump arrived at the capitol separately from the president in an effort to imply there were problems between the couple.

She even used what the First Lady wore to make her point. “You know, she's wearing a cream-colored suit there, which I find interesting. Remember last year the female Democratic Senators all wore white,” she said, forgetting somehow that Democrat women were wearing black for the evening as part of the #MeToo protest. So wearing white was the opposite.

CNN political contributor Paul Begala‏ criticized the mood of the speech. “That speech was a lot of things. Unifying isn't one of them,” he wrote. CNN’s Editor-at-Large Chris Cillizza‏ made fun of how Trump read the speech: “Trump reading the teleprompter is an odd thing. He always seems sort of surprised by the next words.”

The New Yorker billed the speech as, “A Historically Unpopular President Addresses the State of the Union.” And a New York Times columnist explained how the only way Trump could be presidential is if he were to “apologize” and “resign effective immediately.”

MSNBC tried valiantly to be just as bad. Embarrassingly disgraced former NBC anchor Brian Williams, shoved into an MSNBC role, tried to rally the viewers with promises to check facts. “As I said, our entire team of correspondents will analyze what we see and hear. We'll fact check it on the fly, as well.” Given his own fictional history, that was guaranteed to get laughs. The gang even joked about a protester giving the Trump limo the finger. Host Rachel Maddow commented, One-fingered salute!”

NBC News Chief Foreign Correspondent Richard Engel took exception to Trump’s comments about illegal immigration and immediately conflated them to a discussion of all immigration. “It’s the anti-immigrant rhetoric from a nation of immigrants that has many world powers confused,” he commented.

“Social justice” website Splinter showed its unique form of professionalism. “Trump keeps clapping for himself like a f*cking maniac.” Even Dictionary.com waged its own resistance against the president. When he mentioned “clean coal,” the site’s Twitter feed mocked him. It featured a gif of a confused look, saying, “TFW [That Feeling When] when you are trying to find beautiful clean coal, and all you can find is” – it followed with a link to the word “oxymoron.”

Comedian Patton Oswalt seemed to fantasize about the First Lady shooting Trump. He tweeted: “Melania checks to see if the Marine beside her is armed. No pistol in the holster. Deep sigh. Not tonight. #SOTU.” Actress Elizabeth Banks grew so angry over the speech she said it “made me throw my remote and now I am listening to Tom Petty.”

Liberals were on the attack even before Trump took to the podium. Former “Star Trek” actor Wil Wheaton displayed his wide vocabulary. “Tonight, Sh*tler is going to read a speech filled with lies and falsehoods.” “American Horror Story” actor Billy Eichner tried a similar attack, claiming: “the President is a lying, incompetent, racist, misogynistic sack of sh*t.” Neither used asterisks.

Actor Josh Gad joked, the “2 hour live broadcast of the new Purge film on all of network TV is very bold.”

Some in Hollywood simply urged congressmen to walk out. Comedian Rosie O’Donnell and actor John Cusack both embraced that strategy.

The opposition to the State of the Union was typical on the left. The New Yorker billed the speech as, “A Historically Unpopular President Addresses the State of the Union.” And a New York Times columnist explained how the only way Trump could be presidential is if he were to “apologize” and “resign effective immediately.”

The New Yorker called for the speech to be canceled. “Abolish the State of the Union Address,” it urged. The story was more hyperbolic. “The annual State of the Union pageant is a hideous, dispiriting, ugly, monotonous, un-American, un-republican, anti-democratic, dreary, backward, monarchical, retch-inducing, depressing, shameful, crypto-imperial display of official self-aggrandizement and piteous toadying,” he wrote.

Left-wing 538 ran, “Why We Hate The State Of The Union. And A Rebuttal.” Lefty Splinter went with: “Cancel the State of the Union.” The Washington Post tried a snarkier take: “State of the Union gives Trump the chance to ‘act presidential,’ at least for a night.” And The Root suggested “alcohol” because  you’re probably going to need something to help you get through the pimp Don ‘Magic’ Con’s address to the nation.”

At least 11 Democrats announced plans to skip the speech. And those who weren’t playing hooky were resisting. There were at least six responses to the speech planned in one form or another. This is the Resistance Era, after all.

The Democrats had Rep. Joe Kennedy, D-Famous Family, give their official response. Sometime Independent Sen. Bernie Sanders, who ran last election as a Democrat, gave his own. Democrat Rep. Maxine Waters was going on BET to give the unhinged response.

CNN Anchor Jake Tapper mocked the number of responses. “You might think tonight would be a good time for Democrats on the Hill to come together and craft a focused, unified response. Instead, the opposition will feature no fewer than five separate responses,” he said.