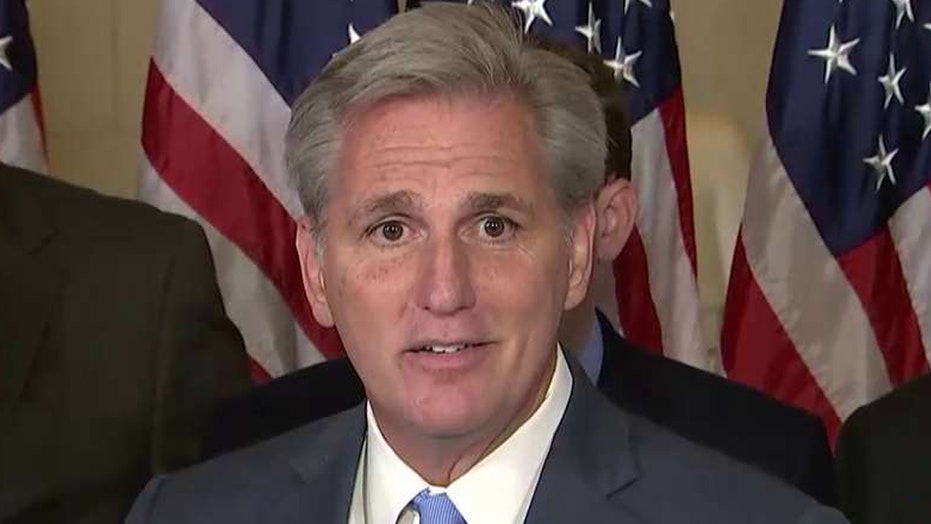 Kevin McCarthy: 'It's best that we have a new face'

In Juan Williams’ latest piece for Fox News Opinion, he charges the liberty wing of the Republican Party with being overly disruptive to the GOP, and suggests that it’s time they split off formally and form their own party.

I’m sure Williams, along with many other Democrats, would love to see their political opposition splintered. Memories of the Green Party’s spoiler effect in the 2000 elections are still too fresh for comfort.  But this analysis largely misses the point of what’s going on.

For decades, Republicans have been presenting themselves to the public as the party of lower taxes, less spending, and limited government.

It’s a legacy they’ve inherited from the Old Right, a movement deeply skeptical of government power.

Members of the House Freedom Caucus, as well as their pro-liberty allies in the Senate, are not rebelling against Republicanism, they are revitalizing it.

And while these opinions found their way into many a stump speech, energizing the electorate against the socialistic tendencies of the Left, they all too rarely translated into actual policy.

After the glory days of Ronald Reagan, George H.W. Bush raised taxes after promising not to, cementing his status as a one-term president.

George W. Bush expanded the scope of domestic spying in ways previously unheard of, while at the same time increasing spending and greatly strengthening the power of the executive branch.

The supposedly “severely conservative” nominee in 2012, Mitt Romney, was even the architect of the model for ObamaCare.

The straw that broke the camel’s back was a voter mandate giving Republicans control of both the House and the Senate, followed by, drumroll please, complete capitulation to the Democrats’ agenda.

The utter inability of the 114th Congress to follow through on any of their campaign promises is nothing short of stunning. Frankly, it’s amazing voters have waited this long to rebel against the disconnect between rhetoric and action.

My point is that the 40 or so Republicans known as the House Freedom Caucus are not some marginal fringe group. They are finally fulfilling the promise of Republicanism Past. They are actually doing what others only talked about in campaign speeches.

Of course, as Williams points out, the process is messy –any change of this magnitude is going to be. But that doesn’t mean it’s unhealthy.

The ousting of John Boehner and the refusal of Kevin McCarthy to take his place are the sort of seismic events that create real opportunities for the first time in a long while; making sure that those opportunities are not squandered is as difficult as it is crucial.

The fact that this debate is being held at all is an extremely welcome and promising sign for the future. What we are witnessing are the growing pains of a party that, by refusing to listen to its constituents, has been in danger of drifting into obsolescence.

Members of the House Freedom Caucus, as well as their pro-liberty allies in the Senate, are not rebelling against Republicanism, they are revitalizing it.

Still, the suggestion that maybe some people are in the wrong party is not wholly without merit. For those Republicans who continue to vote for endless spending increases, more debt, more regulations, and more government intrusion into our lives, perhaps it’s time to start looking for a new home.

There’s no need to form a brand new party, though. I’m sure the Democrats would be perfectly welcoming.