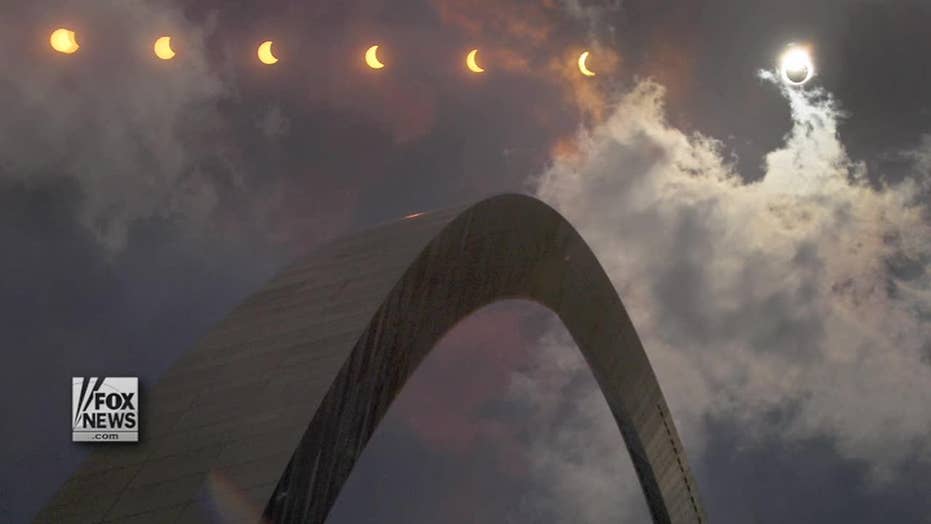 The Great American Eclipse finally arrived and did not disappoint. Here are the best images from the big event

So the eclipse is over. After all the hoopla and wall-to-wall coverage in the media; all the eclipse parties and eclipse Tweets and Instagrams; what did we learn from this extraordinary event?

First, the fact that a heavenly body 238,900 miles from the Earth—the moon—can pass across our line of sight of a body 400 times the moon’s diameter that’s more than 92 million miles away—the sun—and transform our lives for more than three hours, is a timely reminder of the awesome power of nature.

The moon passes in front of the sun during the partial phase of a total eclipse Monday, Aug. 21, 2017, as seen from a roadside park near Useful, Mo. (AP Photo/Charlie Riedel) (AP)

Second, this event came at a significant turning-point in our history as a nation and a people.  The last total eclipse on June 8, 1918, when the United States was just emerging from the aftermath of World War I as the world’s most dominant power—the world’s first “superpower,” even though the word hadn’t been invented yet.

That’s the other lesson from the eclipse: the darkness is temporary. The light does return, brighter than ever. America is the one country in the world with the infinite capacity for self-renewal.

Now 99 years later, the eclipse came when many are saying it was a metaphor for America’s eclipse as a great power, and its decline as a nation and people.  Many around the world believe that decline has set in for good. Right now China is busy positioning itself as our successor, with a new world order headquartered in Beijing—or alternately, some believe, in Moscow.

The solar eclipse totality ends Monday, Aug. 21, 2017, over the Orchard Dale historical farm near Hopkinsville, Ky. The location, which is in the path of totality, is also at the point of greatest intensity. (AP Photo/Mark Humphrey) (AP)

Others, especially on the left, are encouraging decline. They want to see America cut down to size and want to make mainstream Americans pay for centuries of what they see as racism, sexism, and other ideological crimes—of which the current controversy over statues of dead Confederates is only the leading edge.

Other Americans, seeing a president who speaks of “making America great again” mocked and attacked and vilified; watching the violence and turmoil in our streets; mourning the loss of traditional values and the unleashing of forces of cultural decadence and anarchy;  are wondering if the prediction of permanent American eclipse is true.  They see darkness all around them, and wonder if the light will ever come back.

The moon passes in front of the sun for a total solar eclipse visible from Farmington, Mo., Monday, Aug. 21, 2017 in Farmington, Mo. (Anthony Souffle/Star Tribune via AP) (AP)

But it will.  That’s the other lesson from the eclipse: the darkness is temporary.  The light does return, brighter than ever. America is the one country in the world with the infinite capacity for self-renewal.  That’s what we did after the Civil War; after the Great Depression; even after Vietnam when a president named Ronald Reagan restored American confidence and power, and America became again the light of the world.

A multiple exposure image shows the solar eclipse as it creates the effect of a diamond ring at totality as seen from Clingmans Dome, which at 6,643 feet (2,025m) is the highest point in the Great Smoky Mountains National Park, Tennessee, U.S. August 21, 2017. Location coordinates for this image are 35Âº33'24" N, 83Âº29'46" W. REUTERS/Jonathan Ernst TPX IMAGES OF THE DAY - RTS1CPZ5 (REUTERS)

We still have the most powerful and technologically advanced military in the world, that can project power and shock and awe to any place in the world.

Thanks to the fracking revolution, we have achieved not just energy security but energy dominance, as America has emerged as the world’s hydrocarbon-producing superpower.

A total solar eclipse is seen above Madras, Oregon, U.S., August 21, 2017. Courtesy Aubrey Gemignani/NASA/Handout via REUTERS ATTENTION EDITORS - THIS IMAGE HAS BEEN SUPPLIED BY A THIRD PARTY. MANDATORY CREDIT TPX IMAGES OF THE DAY - RTS1CP3P (REUTERS)

Our education system is broken, but we have a host of fixes from online and for-profit universities to charter schools and school choice, waiting in the wings.

Above all, we have a Constitution which still protects our freedoms from those who think those freedoms are outdated or immoral, or both.  A Constitution that still preserves sovereignty where it belongs, in the American people—if they can just force those who serve in government to remember that.

Moments of temporary darkness will come and go, like eclipses (the next total one will be in just seven years). But American greatness and exceptionalism is here to stay, and will shine on long into the future.