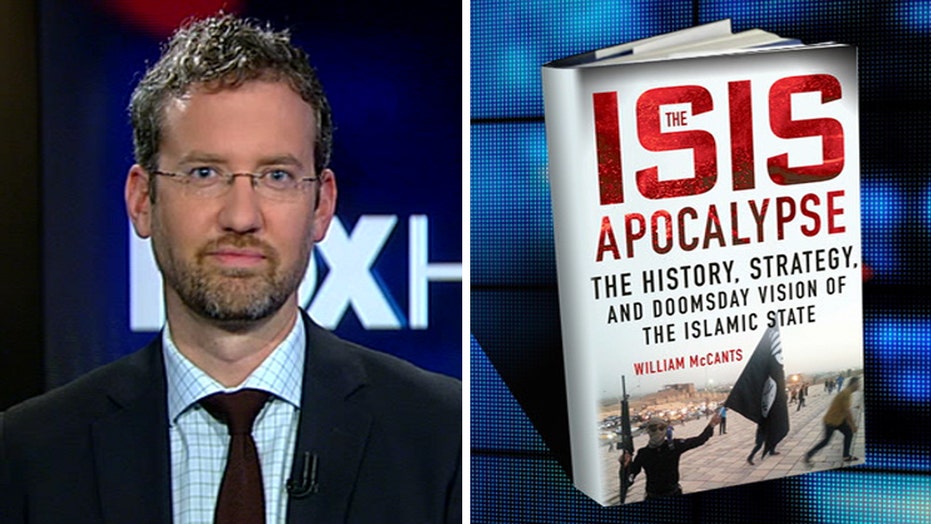 William McCants on ISIS and the future of the caliphate

Fox News Chief Washington Correspondent James Rosen talks to author Will McCants about his book, 'The ISIS Apocalypse: The History, Strategy, and Doomsday Vision of the Islamic State'

Where Americans once knew very little about ISIS – the brutal terrorist army that has established its own state, or caliphate, in Syria and Iraq, and begun exporting its brand of jihad both to neighboring nations and to countries as far away as France and the United States – there is now a glut of information about the organization. Indeed, Amazon lists three-dozen books on the subject, most of them published since late 2014.

“A lot of it was hastily composed and it's written by people who often don't have a long familiarity with the group,” said William McCants, the Mideast scholar who directs the Brookings Institution’s Project on U.S. Relations with the Muslim World. “I've been studying [ISIS] for a decade. I read Arabic. So my account is pretty informed by the primary sources about the organization.”

A former State Department official, McCants is the author of "The ISIS Apocalypse: The History, Strategy, and Doomsday Vision of the Islamic State," published in September by St. Martin’s Press.

His book comes well recommended by some of the leading lights in studies of Islamist terrorism: Lawrence Wright, author of "The Looming Tower: al-Qaeda and the Road to 9/11" (2006), the Pulitzer Prize-winning history of al-Qaeda, called The ISIS Apocalypse “insightful and essential” and pronounced McCants “one of our greatest scholars of Islamist movements”; and Graeme Wood of the Council on Foreign Relations, author of “What ISIS Wants,” a much-discussed story in "The Atlantic" on the origins of ISIS’ worldview, declared: “No one knows more about ISIS' doomsday theology than Will McCants.”

Unlike President Obama, who has characterized ISIS as “not Islamic,” McCants made clear in a recent visit “The Foxhole” that he sees the group and its actions as rooted in Koranic interpretation – albeit selective.

ROSEN: One of the things that I think has been most hotly debated about ISIS is the question of its fidelity to the Koran – how much of an outgrowth of the actual explicit teachings of the Koran a group like ISIS really is, or whether in fact it represents a perversion of the Koran. What say you?

McCANTS: Well, Islamic scripture is more than the Koran. It's also the words and deeds that are attributed to the founder of Islam, Mohammed, and the Islamic State finds passages in those scriptures that justifies what it wants to do. I mean, Mohammed himself waged a war to establish a state; so there's a lot there to draw on. But I also noticed that they conveniently ignore things that cut against their political program.

McCANTS: For example, Mohammed several times says don't go after non-combatants, don't kill women and children. And it's certainly something the Islamic State has done because they are waging a brutal kind of insurgency that they think is pretty effective.

ROSEN: And where in the Koran or the other scriptures of Islam might a group like ISIS look to find any kind of justification for the killing of innocents?

McCANTS: Well, it can point to other places where Mohammed seems to have advocated extreme measures when faced with an overwhelming foe or a setback on the battlefield. But then again, there are other scriptures that offer the opposite argumentation, and the Islamic State picks and chooses…

ROSEN: All of this is…an elaborate way of posing a more basic question, which is whether the Koran, or the other texts of Islam that you might point to beyond the Koran, endorse violence in some way that makes Islam itself particularly fertile for jihadi recruitment.

McCANTS: Well, there's no question that the Koran and other scriptures endorse violence in the service of religion. But they tend to try and put restrictions on it. The Islamic State tries to find ways around those restrictions because they are inconvenient for the type of insurgency it's trying to wage. So much of its strategic literature offers advice for how to argue around those parts of scripture that are inconvenient for its project.

McCants argued that the Obama administration “for many years” misjudged ISIS’ capabilities and staying power. “I mean, there's the famous statement that the president made about [ISIS] being a JV team,” McCants said. “They believed that the group would collapse under their own extreme weight, and you wouldn't have to really have to mount an effort against it. I think, of course, there's been a growing realization over the past year that more than wishes and dreams are going to be necessary in order to destroy the Islamic State, and the president is putting more muscle behind it as a consequence.”

Nonetheless, McCants – who is also an adjunct professor at The Johns Hopkins University – believes that ISIS is a functioning state and is “going to be with us for a long time to come.”