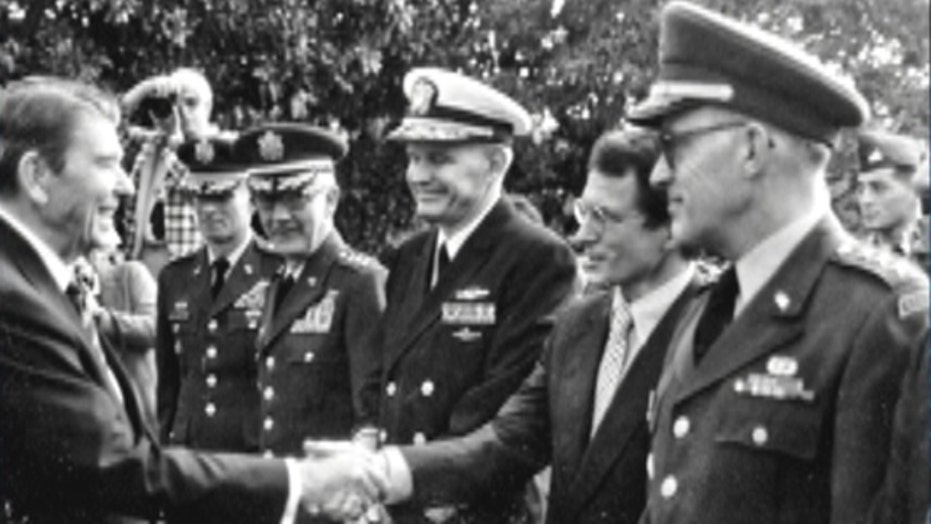 The first time Chase Untermeyer shook hands with George H.W. Bush was in October 1963, when the latter was chairman of the Republican Party for Harris County, Texas. Three years later, when Untermeyer was a student at Harvard University and spending the summer in his native Houston, he volunteered to work on Bush's campaign for a congressional seat representing the west side of the city. "And from there," Untermeyer said in a recent visit to "The Foxhole," "all things flowed."

That proved true for both men. Bush, of course, went on to become Republican Party chair, the U.S. ambassador to the United Nations, director of the Central Intelligence Agency, and, in 1981, vice president of the United States. It was in that capacity that he hired Untermeyer to serve as his executive assistant in the White House. Since their initial meeting, Untermeyer had graduated from Harvard with honors, served the Navy with honor in the Pacific theater during the Vietnam War, and served as a reporter for the Houston Chronicle and as a state lawmaker in Texas.

Untermeyer spent three years at the vice president's side, a front-row seat at the making of history that Untermeyer recounted in his first memoir, "When Things Went Right: The Dawn of the Reagan-Bush Administration" (Texas A & M University Press, 2013). In 1984, President Reagan nominated Untermeyer to be assistant secretary of the Navy for manpower and reserve affairs, and it is that stretch of duty he recounts in his second memoir, being published in April, also by Texas A & M University Press, and entitled "Inside Reagan's Navy: The Pentagon Journals."

"I began keeping a journal at the age of nine," Untermeyer told me, and he has kept up the practice "all my literate life." For his newest volume he drew on the journals he maintained while serving at the top echelons of the Defense Department. While he had little direct contact with the commander-in-chief, and had supported George H.W. Bush in the 1980 Republican primaries, Untermeyer ultimately came to regard Reagan as an exceptional leader. "It was as a ‘Bushie' that I came to Washington, to work for the vice president," Untermeyer recalled. "And like a lot of people who had supported George Bush, I had my doubts about this man Reagan, as to whether he could handle the job, whether his policies made sense, and whether he would be allowed to succeed in Washington.

UNTERMEYER: And just as converts in religion tend to be the most fervent…I fell exactly into that category in terms of becoming a great admirer of President Reagan. Now I only saw him in meetings and the rest; I can't claim to have been in the Oval Office during those times because I was working for the vice president. Nevertheless, I think that kind of Reagan – the one we saw as a nation but I also got to see in real-time – was the Reagan who counted. That is: the Reagan who was the communicator, the leader, the brilliant user of other people's skills and talents.

ROSEN: Were you able, ever, to observe anything of the interactions between Ronald Reagan and George H.W. Bush?

UNTERMEYER: A bit. And there again history played a role. I think that before Reagan chose Bush to be his running mate, he had his sense of Bush from what he was told and what he read. And the same was true with Reagan as the Bushes saw him. In fact, Barbara Bush very famously said that she was delighted to get to know the real Ronald and Nancy Reagan, because, she said, "We thought the Reagans were like the Reagan people we had known in Texas." And by that, she meant the fiercest Reagan supporters at the grassroots, who in fighting George Bush in his various political battles in Texas, were rather nasty, suspicious, intolerant, prejudiced – and the Reagans were anything but. So that getting to know each other led to, I think, a magical relationship, which shouldn't have been too surprising, because both men had a great capacity for friendship.

When he left the Pentagon in 1987, Untermeyer's days as a "Bushie" were far from over. He would serve in two senior White House posts when Bush succeeded Reagan as president. And when, in the next decade, George W. Bush moved into the Oval Office, he tapped Untermeyer to serve as the U.S. ambassador to Qatar, a critical mission during the early years of the war on terror.

That experience, of working with Arab allies in the Persian Gulf, leaves Untermeyer critical of President Obama's leadership in the region today – and he was not shy about voicing that criticism in "The Foxhole." Yet the former warrior and diplomat is also evenhanded in his assessment about the wisdom of the Iraq War. On the one hand, Untermeyer notes that Saddam Hussein had long acted brutally and furtively with respect to WMD stockpiles, and that at the time the Bush-Cheney administration launched the war, there was wide support within the Mideast for Saddam's forcible ouster.

Still, Untermeyer sees another side to the matter: "Churchill, writing his memoirs in 1930, said that you should never go into a war imagining that it will be easy or quick, that there will always be the uncertainties of war to, as in the case of Iraq, stretch it out, make it more expensive, cost more lives, and have greater consequence."