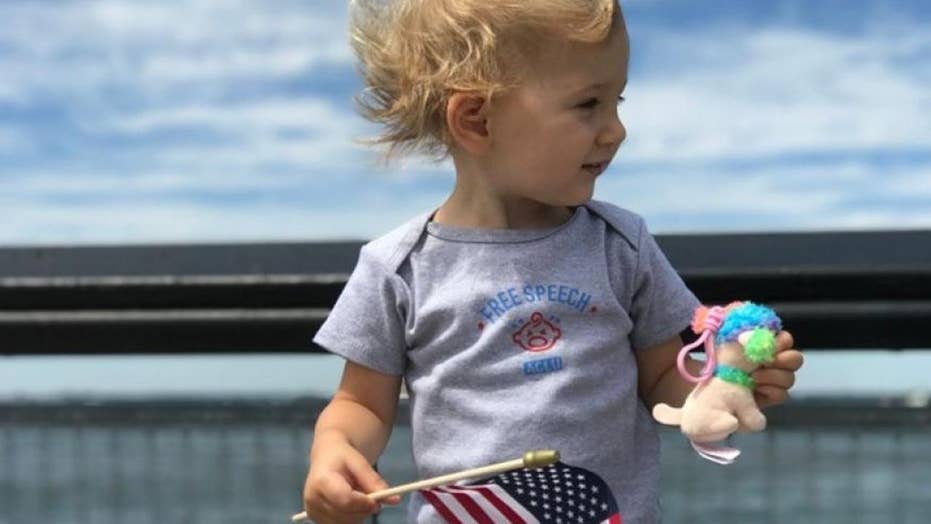 ACLU attacked online over photo of white baby with US flag

Earlier this week, the Twitter account for the American Civil Liberties Union posted an innocuous picture of a toddler wearing a tyke-sized ACLU T-shirt with the words “Free Speech” on the front. The little one was holding a stuffed animal in one hand and a mini American flag in the other. The tweet that accompanied the photo said “This is the future that ACLU members want.”

Within moments, the tweet was descended upon from the corners of the outrage twitter-sphere because that’s what social media is now. The great social injustice committed here by the ACLU? The child in the picture was white and therefore declared as racist and propping up white supremacists. Senior Guardian columnist Steven Thrasher posted a humorous gif of Blackish star Anthony Anderson crying while others took it a bit more seriously.

But other than a handful of verified twitter users, there wasn’t really a catch-fire moment. It wasn’t picked up by media outlets or journalists on Twitter. There was a minor firestorm over a picture that attracted scant attention but in the end that didn’t matter.

Within the hour, however, the ACLU posted a weird retraction of the image, stating “When your Twitter followers keep you in check and remind you that white supremacy is everywhere,” along with a Kermit the Frog gif.

If the ACLU can’t even defend their own words on their own Twitter account, how are they supposed to defend anyone else’s?

The issue here shouldn’t necessarily be that the ACLU apologized for a picture they posted of a child wearing their own “Free Speech” merchandise and calling it white supremacy. It should be how quickly they were willing to placate a mob without any real influence.  Other than a couple people with verified twitter accounts, this really wasn’t an issue. But of course now it is.

When viewed through a larger lens, it’s a troubling pattern in the wake of the Charlottesville protests, where the ACLU has found itself walking a delicate line of speaking out for the rights of speech (everyone’s speech, yes, including idiot Nazi role players) while not being accused of being white supremacists themselves and/or finding themselves on the receiving end of a trademarked bottle of Antifa-brand urine bomb.

When the ACLU spoke out in defense of the rights of white supremacists, there was a collective meltdown, much, much larger than simply posting a picture of a cute little kid with a flag. The New York Times even ran an editorial by K. Sue Park saying, “By insisting on a narrow reading of the First Amendment, the organization provides free legal support to hate-based causes.” The title of the piece was “The A.C.L.U. Needs to Rethink Free Speech.”

Being publicly chastised by our elite betters seemed to be enough in that case.  The ACLU appeased the mob by telling The Wall Street Journal that they will no longer defend hate groups protesting with firearms. Several men and women in Charlottesville were seen claiming to be a part of some kind of weekend militias and open-carrying firearms as a way of acting like a self-appointed police force. It should also be noted that after the ACLU made this declaration, members of Antifa outside the memorial service for Heather Heyer were seen carrying rifles.

But this is the corner the ACLU has now backed itself into, apologizing to random mobs of anonymous twitter accounts. The ACLU can’t explain what is racist about the photo of the baby with the flag they posted. Instead they felt the need to clarify that it’s simply babies in onesies and directed followers to the official Instagram account where they not only feature babies in onesies, but support of protestors for Black Lives Matter and Chelsea Manning.

The image clearly was not meant to represent White Supremacy but that didn’t matter. This is a time when the professional and political left is calling into the question the value of free speech and beginning to dip their toes into rationalizing limits that we, as a politically correct society, should put on speech.

It’s not the job of the ACLU to apologize for its defense of speech. It’s not their job to placate a random twitter mob that finds their stances problematic. It’s their job to defend the speech rights and civil liberties of all Americans. If they can’t even defend their own words on their own Twitter account, how are they supposed to defend anyone else’s?