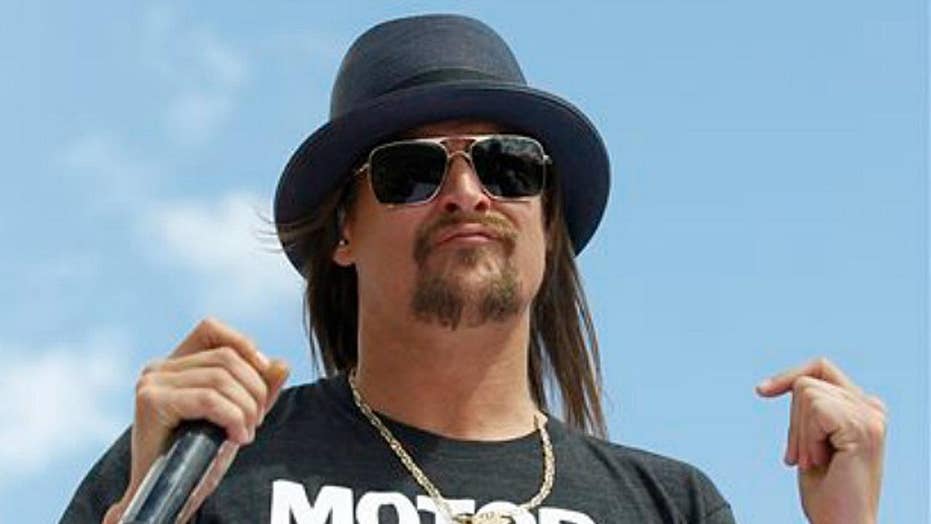 Let’s hit the brakes on this one.

How did we get to the point where Rob Ritchie (a.k.a. Kid Rock) — a man with no political record, a man known to his fans as “Pimp of the Nation,” and a man featured in a sex tape — is treated as a serious candidate for the United States Senate?

The short answer is: President Trump.

The reality TV star’s victory in the 2016 presidential campaign gives instant credibility to any famous person looking to dive into national politics.

Even more stunning, Trump’s win is also transforming the world of not-so-famous people who are furious that Trump is president.

With Trump’s low approval numbers and failure to pass any significant legislation, there is a clear incentive for people to believe they have a chance to win and can do better at governing.

Exhibit A is Rep. John Delaney (D- Md.), an obscure three-term congressman. He announced recently that he is running for president in 2020.

Exhibit B is the early rush of unknown, anti-Trump Democrats into congressional races.

“As of the end of June, 209 Democratic challengers had registered with the FEC [Federal Election Commission] and raised at least $5,000,” Michael J. Malbin wrote late last month on the Brookings Institution’s ‘FixGov’ blog. “That more than doubled the previous high mark since 2003.”

Malbin correctly notes that when Republicans had 78 challengers lined up in 2009 it was a sign of energy in the party that in the end helped the GOP regain the House majority the following year.

The number of Democrats signing up and raising money to run for Congress in 2018 is a nationwide phenomenon. By Malbin’s count, Democrats already have a candidate in place to run against 105 Republicans now in the House.

“At this same time in 2009,” Malbin wrote, “only 50 of the Democratic incumbents were up against challengers with $5,000. So the Democrats are [now] putting themselves in a strong position to take advantage of a national tide in their direction, if there is one.”

Meanwhile, on the Republican side, there is the eye-popping possibility of Sen. Kid Rock of Michigan.

“I know a lot of people are thinking: this is some sort of joke, right?" Sen. Elizabeth Warren (D- Mass.) wrote in a fundraising appeal. "Well, maybe this is all a joke — but we all thought Donald Trump was joking when he rode down the escalator at Trump Tower and announced his campaign, too. And sure, maybe this is just a marketing gimmick for a new album or tour — but we all thought Donald Trump was just promoting his reality TV show, too."

If Michigan voters were willing to overlook tape of Trump boasting about grabbing women’s genitals, would it really be that much of a stretch to overlook Kid Rock’s history when they cast their vote for senator next year?

In fact, despite constant attacks on “Hollywood liberals” and “New York values” for decades, Republicans have been very successful winning Congressional races with celebrity candidates.

Wisconsin Republican Congressman Sean Duffy starred on the MTV reality show “The Real World” before being elected to Congress in 2010. He is seen as a rising star in the GOP, chairing an important subcommittee of the House Financial Services Committee.

Actor Fred Grandy and musician Sonny Bono ran for the House and won as Republicans. Another actor, Fred Thompson, served for eight years as a senator representing Tennessee and even ran for president in 2008.

Democrats have their own celebrities too.

Former “Saturday Night Live” comedian Al Franken is now a Democratic senator from Minnesota and a leading light of the anti-Trump “resistance” on Capitol Hill.

But the current blending of celebrity and politics that created Trump may also provide a valuable clue for the resistance as to how to beat him.

Professor Tim Wu, the author of the new book “The Attention Merchants: The Epic Struggle to Get Inside Our Heads,” wrote in the New York Times earlier this year that the celebrity culture that brought Trump to power may end up being his downfall.

“Being hitched to the twin necessities of constant warfare and the public’s limited attention span may yield a series of unfinished projects that ultimately amount to little,” Wu wrote.

“It also suggests that Mr. Trump’s eventual downfall may be less like Richard Nixon’s than Paris Hilton’s. To live by attention is to die by it as well, and he may end up less a victim of political defeat than of waning interest, the final fate of every act.”

If Trump completes a second term in office, Sen. Kid Rock’s reelection campaign in 2024 will be a referendum on the Trump presidency. Think about that one for a minute.