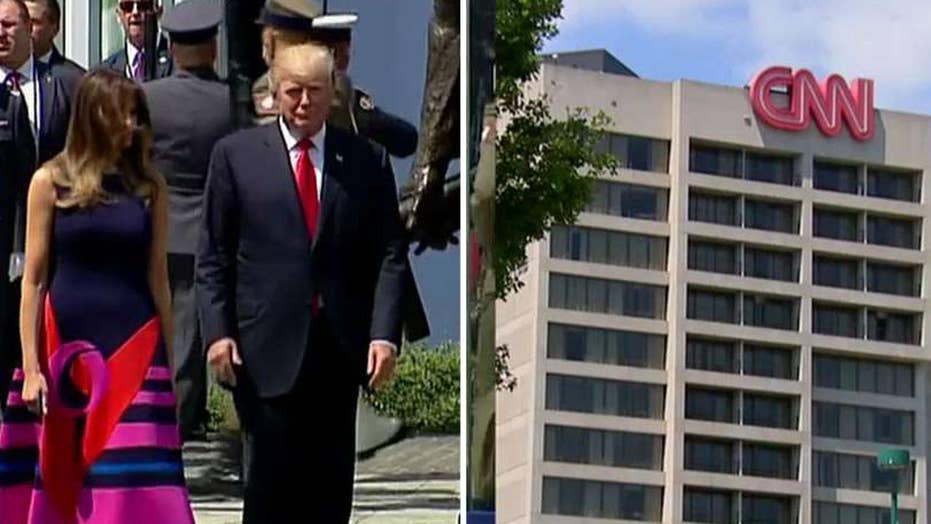 President slams the US media on foreign soil, prompting CNN's Jim Acosta to say Trump had a 'fake news conference' in Poland. But is CNN only making things worse for themselves with their 'selective outrage' and by playing victim? #Tucker

It was a bad week for journalists. Many in the traditional media felt besieged -- especially those who work for a place called CNN -- targeted for scorn by conservatives and for investigation even by their fellow journalists.

1. This Is CNN: This week was extra special for CNN as the network continued its crusade against the president. First, its staffers whined about Trump posting a pro wrestling video modified so Trump appeared to be fighting CNN. His opponent’s head had been humorously replaced with a CNN logo. And then the network targeted the anonymous poster who created the meme.

That’s where things got sticky. CNN’s article made it clear they weren’t publishing the name of the meme creator “because he is a private citizen who has issued an extensive statement of apology.” The network added that he “showed his remorse” and “said he is not going to repeat this ugly behavior on social media again.”

Then came the kicker. The article added: “CNN reserves the right to publish his identity should any of that change.” In other words, as long he acts in ways CNN approves of, the network won’t reveal who he is and wreck his life. The term #CNNBlackmail trended on Twitter soon afterward as liberals and conservatives alike abused the network.

Andrew Kaczynski, who wrote the piece, has defended it, saying, “This line is being misinterpreted.” But CNN’s Chris Cuomo even tweeted out the idea of outing the man with the question: “Should CNN reveal name of Reddit user who made trump wrestling video? Had a lot of bigoted and hateful material on page and website.”

The resulting chaos turned much of the internet against CNN. Being biased is one thing. Threatening online anonymity another. That led to even The New York Times trying to explain how such online battles evolve. “Remarkably, the CNN episode has managed to unite the notoriously fractious right-wing meme community under a common cause.” Posters have revealed home addresses and more from several CNN staffers in response and have claimed they will keep fighting.

The network probably wishes the whole thing would just go away. The online community isn’t likely to let that happen.

2. What a trip – or stumble? The Washington Post did an examination of “the trip of a lifetime” -- a $135,000, 26-day, nine-country expedition. Only one rub: “Those who make the journey will be accompanied on various legs by journalists from the New York Times.” It’s being organized and promoted by the paper. The issue isn’t just the access to Times journalists. It’s the six-figure price tag. The Times likes to pretend it’s not a publication for America’s liberal elite and then it organizes a junket for the rich and richer that “could gross as much as $6.7 million.”

Some Times staff probably want to distance themselves from the expedition. It’s an embarrassment to have your No. 1 competitor point it out.

3. Life is precious only when journalists are forced to pay attention: The case of 11-month-old Charlie Gard is every parent’s nightmare. The child has “a rare genetic condition that has damaged his brain and left him unable to breathe without assistance,” according to Fox News. British authorities have refused to follow the parents’ wishes to let them transport him to the United States for experimental treatments. They didn’t just give him a death sentence. They said they get to decide what happens, not his parents. ABC, CBS and NBC didn’t care about the story, though American conservatives were up in arms about it. None of the three networks mentioned the case. Then a funny thing happened, the Media-Critic-in-Chief tweeted about it. Trump changed the media’s mind with a mere two dozen words: “If we can help little #CharlieGard, as per our friends in the U.K. and the Pope, we would be delighted to do so,” he tweeted. The impact was instantaneous. All three broadcast networks covered the story that night. Just as Trump shamed the media into covering the March for Life, he once more forced uncaring journalists to care about pro-life issues. The result was amazing -- at least a half dozen mentions of the story. As CBS Evening News anchor Elaine Quijano explained, “President Trump and Pope Francis are offering to help a terminally-ill baby in Britain.” When journalists wonder why pro-lifers backed Trump in the election, they can point to stories like this.

4. New York Times delivers fake news: Some of the best things about the internet are the humorous takes -- The Onion, Babylon Bee and Duffel Blog on the web -- and countless Twitter accounts. One of the most awesome is DPRK News Service, which earned a new honor this week. It was so ridiculous that it fooled The New York Times, where people forgot how to smile in about 1946. Seven people contributed to a story headlined: “U.S. Confirms North Korea Fired Intercontinental Ballistic Missile.” The article clearly shows that North Korea’s combined nuclear weapons and missile technology have all the ingredients for a global crisis. Yet somehow the Times managed to quote a tweet from one of the most well-known Twitter humor accounts. DPRK posted a video of a rocket firing with the caption: “Imbecilic Americans drunkenly fire missiles into East Sea of Korea, demonstrating near total ignorance of ballistic science.” That led to a hilarious correction, which read in part: “The North Korean government did not belittle a joint American-South Korean military exercise as ‘demonstrating near total ignorance of ballistic science,’ that statement was from the DPRK News Service, a parody Twitter account.” Maybe the Times shouldn’t be laying off all those copy editors after all.

5. Let’s Put On A Show! Nothing angers the traditional press more than President Trump tweeting. It’s a double whammy. So-called neutral journalists almost always hate what he says. But more, they loathe that he says it directly to the American public. Washington pressers (and press) become less important and reporters get cut out of the equation. Journalists have protested this every way they can think of from mocking the tweets to making a scene during the press briefings. Now The Washington Post (D-Amazon) has a new tactic -- a children’s choir singing Trump’s tweets. It wasn’t enough for Post editor Marty Baron to turn every section into an endless rant against the president -- news, sports, style, even religion. To further befoul the paper’s reputation, he now uses a video of kids to underscore just how much he and owner Jeff Bezos hate Trump. The move was so juvenile that The Hill’s Jonathan Easley said that it, “seems needlessly antagonistic and a dumb move right now.” It’s like Baron and Bezos want to turn the Post into a version of “Saturday Night Live” without the humor. On second thought, that’s exactly what SNL has become. And the Post is working hard to be just like them.

Can’t wait to see what next week brings!