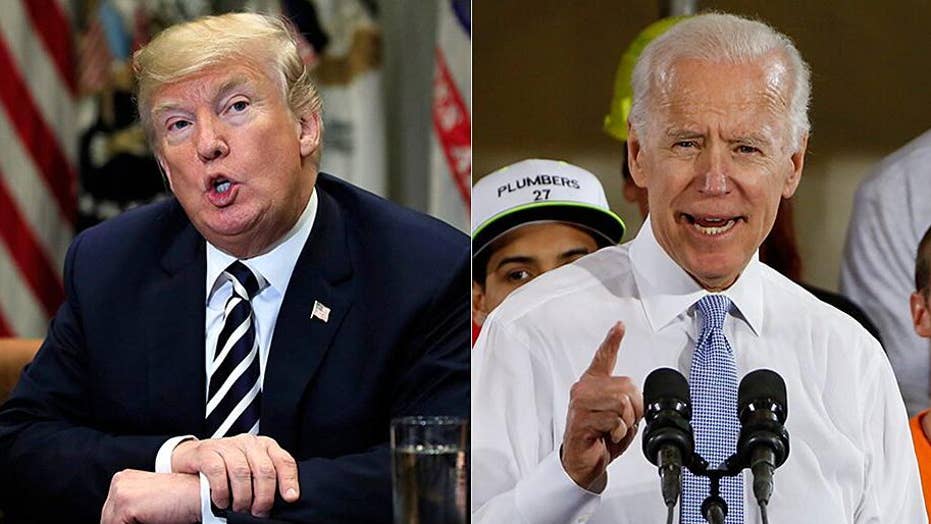 President Trump and Joe Biden trade jabs amid dueling events in Iowa; reaction and analysis from the 'Special Report' All-Stars.

The 2020 election is heating up, fueled by anti-Trump Democrats. However misguided, numerous Democratic candidates have now called for President Trump's impeachment, signaling a dogfight to come on the campaign trail.

As an incumbent presiding over a booming economy, President Trump still has the advantage, but this is no time to rest on one’s laurels. Recent surveys reveal Democrats polling strongly in battleground states like Michigan, which the president must win again to retain control of the White House.

The key to a Trump win is simple: Voter registration.

RUSH LIMBAUGH: TRUMP NEEDS TO GO TO CALIFORNIA, REMIND AMERICANS WHAT A DEM-RUN STATE LOOKS LIKE

We’ve seen the rabid enthusiasm of the left since Inauguration Day, and it’s not going away in 2019. Anti-Trump Democrats are motivated to make their #Resistance agenda complete and end the Trump presidency.

I’ve traveled the country in support of the Trump agenda, and there are millions of voting-age Americans who haven’t been registered to vote for President Trump — yet.

For Republicans, the left’s energy is a wake-up call. Bombarded on a daily basis by entrenched anti-Trump political and media elites, the "silent majority" that rose up to support President Trump in 2016 must rise up once again.

Getting that silent majority out to the polls is the secret weapon for President Trump and his allies. And, to that end, there are promising signs: The president’s approval rating hovers around 90 percent among Republicans. Most Americans are satisfied with the U.S. economy and don’t see a recession coming anytime soon. More specifically, Americans are satisfied with President Trump’s handling of the economy, with nearly 60 percent calling it a "good job." In fact, over twice as many Americans credit President Trump for our economic prosperity compared to those who credit President Obama.

Assuming that economic growth remains robust and job creation keeps trending up, the majority of America will have no problem re-electing President Trump. Americans are primarily concerned with their career prospects, wage earnings, and 401(k) plans, not allegations of Russian collusion and the liberal media’s "outrage of the day." When Americans are provided with financial security and their economic outlook is bright — as it is today — the left’s daily outrage falls on deaf ears.

Now it’s up to Republicans to fill that void and keep the left at bay. According to recent polling, over three-quarters of Republicans are pledging to vote for President Trump or at least considering it. Strong majorities of religious, suburban, and rural voters are eyeing a Trump vote. That enthusiasm must be sustained and expanded.

Likewise, Republicans must go after unregistered voters who support President Trump’s "America First" agenda. Rest assured, there are millions of them. In any given election cycle, one-fifth of America’s voting-eligible population is not registered to vote. Over 60 percent of those Americans are never even asked to register, presenting an opportunity for the Republican Party to state its case.

I’ve traveled the country in support of the Trump agenda, and there are millions of voting-age Americans who haven’t been registered to vote for President Trump — yet. They can be. That’s why my organization, the Committee to Defend the President, is partnering with Great America PAC to register one million new Trump voters. We’re calling it the "Great America Voter Drive"—to keep America great.

It won’t be easy, but it is possible. President Trump’s conservative base — millions upon millions of patriotic Americans — stands behind him, ready for four more years of "America First" policies. We can expand that base by millions more, and we will.

Ted Harvey serves as chairman of the anti-Biden Committee to Defeat the President.