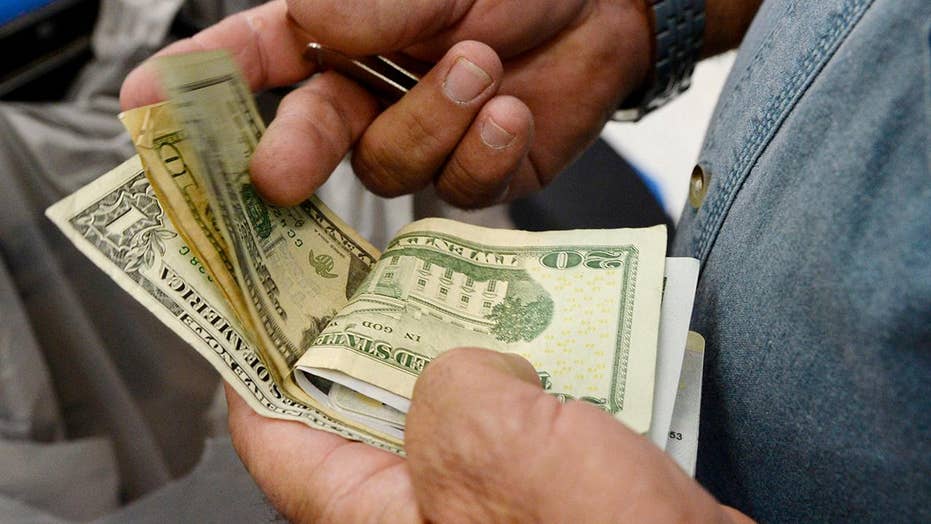 How the tax law is impacting Americans' paychecks

Gerri Willis breaks down the numbers.

Last week President Trump’s tax cuts started to get personal as people across the country logged into their bank accounts and began to find increases in their paychecks. The doom and gloom tax cut scenario the Democrats tried to sell the American people started to become exposed as nothing more than highly charged rhetoric. This from a party desperate to justify why not a single one of them voted in favor of letting people keep more of their money.

As people’s wallets began expanding this week it just got real.  More money back in the hands of people of every income level - brought to you by President Trump and the Republicans in Congress.

Last week was just the beginning. Even more people will see their paychecks rise by mid-February, as employers have until February 15 to enact the IRS withholding changes. According to Treasury Secretary Steve Mnuchin, about 90 percent of people in the workforce will see extra money in their paychecks.

In an interview with the Washington Post, House Minority Leader Nancy Pelosi, D-Calif., was asked what keeps her up at night. Her answer: the tax cuts.  Specifically, she calls them a “dark cloud.”

Pelosi is worth $29.35 million, but what keeps her tossing and turning on her high thread-count sheets all night is letting the American people keep more of their hard-earned money. Let that sink in.

Mrs. Pelosi is worth $29.35 million and ranked the 15th richest member of Congress out of 541 rankings, but what keeps her tossing and turning on her high thread-count sheets all night is letting the American people keep more of their hard-earned money.  Let that sink in.

According to Americans for Tax Reform, to date 317 companies have announced they’re giving their employees raises, bonuses or increases to their 401-K accounts. This list seems to grow almost every day.

It’s worth pausing for a moment to remember how far we’ve come since President Obama’s promises of hope and change, which proved to be nothing more than a clever campaign slogan. He left office with our country needing the hope and change he promised more than ever.

According to the U.S. Department of Agriculture, President Obama inherited over 28 million people on food stamps when he took office. That number skyrocketed to over 47 million people during his presidency.

For four straight years — 2012-2015 — the number of people on food stamps didn't drop below 45 million; one out of every seven people in the United States. In President Trump’s first year in office, before the tax cuts even took effect, that number was down to 42.2 million.

January of this year showed wages increasing faster than they have in the last eight years.

Unemployment for women is at an 18 year low, and the overall unemployment rate is the lowest its been since 2000.

This is real hope and change.

It’s becoming clear that Democrats have a messaging problem, as they continue to tell people that getting back more of their money is bad, even as people across the country are starting to see more of their money in the paychecks.  But damn the cognitive dissonance, full speed ahead.

Rep. Joe Kennedy, D-Mass., gave the Democrats’ response to the president’s State of the Union address, in which he said: “We can cut taxes for corporations today if we raise them for families tomorrow.” Families seeing just the opposite happening would disagree, as would his grand-uncle John F. Kennedy, who pushed and signed an across-the-board tax cut into law.

Rep. Debbie Wasserman Schultz, D-Fla., is also on message, having dismissed $1,000 in bonuses as not going “very far” for most people.

In Boston last week, Nancy Pelosi doubled down on her “crumb campaign,” as she continued to remind people at a town hall in Cambridge that she considers the benefits they’re getting from the tax cuts to be nothing more than crumbs. She’s used that term so often to dismiss extra money back in the hands of hard working Americans that it’s become a household word. She even went a step further saying, “It’s a total rip-off on the American people.”

Perhaps Republicans should be thanking Mrs. Pelosi and the Democrats for doing their job for them, and revealing how they really feel about giving people their money back. Every time those roughly 90 percent of Americans deposit their paychecks - whether it’s once a week, once a month, or every other week - they’ll be reminded the extra money is just crumbs and a rip-off to Fancy Nancy.

The Trump tax cuts are a reversal of the Obama years and are taking undue burdens off of families and giving them more financial freedom to pay off debt, save for a special trip, or finally start saving for retirement or college.  Now, when Americans look toward the future they have every reason to be hopeful, that’s a welcome change.