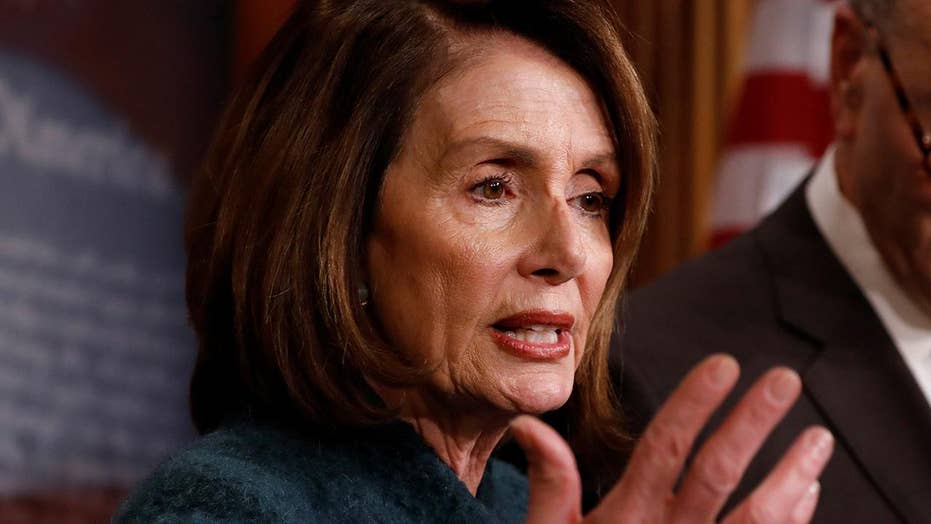 Will Pelosi be a liability for Democrats in the midterms?

Panel looks ahead to and debates the midterm elections.

For a long time, the Democrats have been successful by scaring people into voting for them. It’s a tactic used when you can’t persuade people on policy. Americans were recently reminded of the Democrats’ usual refrain when House Minority Leader Nancy Pelosi declared President Trump’s tax cuts as “Armageddon.” Mrs. Pelosi went there, relying on contrived drama, comparing a tax cut to a fight between biblical armies during the end times.

When the Senate GOP was discussing Mr. Trump’s health care bill, the Democrats’ response? “Hundreds of thousands of people will die,” delivered again by Nancy ‘We’re all gonna die’ Pelosi.

Neither of those warnings are serious or true, but the Democrats have no policy answers, so they’ve decided to rely on existential threats.

Keith Ellison, the deputy chairman of the Democratic National Committee, was handed the Grim Reaper baton when he said this to the Progressive National Candidate Training gathering last week: “Women are dying because we are losing elections,” Mr. Ellison said, Fox News Insider reported. “We don’t have the right to lose a damn election. We have to win.”

Mr. Ellison was referring to a reported rise in maternal mortality rates in Missouri and Texas. The good news is, for Texas, that report has already been disproven, and explained by a computer reporting error.

And what is their argument really based on? The infantilizing of women. Underscoring Mr. Ellison’s remarks is an argument that women are so fragile, so vulnerable, that if Democrats don’t win and government doesn’t control more of your life, you’ll die. That is an inherently sexist argument, promoting the fraud that women can’t control their own lives and need a Big Brother to help them along.

Imagine what we could accomplish if we rejected the political class’ attempt to divide women and pit us against each other? Instead of using women’s lives as fodder for a stump speech, what if we actually committed to working together to determine what policies improve women’s lives, their health and their longevity?

Facts are an inconvenient thing for Democrats. They prefer people ignorant on the truth of any matter, because when it comes to the destruction of women’s lives, that’s a Democrat’s specialty.

The “Women’s March” group, arguably the main and absolutely the most visible organizing group for the Democrats, recently bemoaned the shuttering of the sex trafficking website Backpage.com and arrest of its leadership.

Just days later, Ken Paxton, the Texas attorney general, announced the company pleaded guilty to human trafficking and money laundering. The “Women’s March” complaint? The removal of Backpage makes it more difficult for prostitutes to communicate with their customers.

Mr. Paxton’s office noted, “As the largest online sex trafficking marketplace in the world, Backpage facilitated the sex trafficking of innocent women and children through sites it ran for 943 locations in 97 countries and 17 languages. It was involved in 73 percent of all child trafficking cases reported to the National Center for Missing and Exploited Children.”

Perhaps Mr. Ellison wants to distract women from the fact that liberal policies don’t have a good track record when it comes to improving their lives.

During Barack Obama’s two terms as president, “women suffered steeper declines in take home pay than men. Women also experienced sharper declines in employment and a faster rise in poverty. … On Mr. Obama’s watch, 2 million more women slipped into poverty. The poverty rate among women reached 16.1 percent — the highest level in the 20 years prior to his disastrous presidency,” economist Stephen Moore reported in this newspaper.

As our veterans have learned when government takes over your health care, bad things happen. If we really want to improve women’s health care, it would be worth examining the expansion of Medicaid through Obamacare.

Hadley Heath Manning, the director of policy at Independent Women’s Forum, noted, “It’s very interesting that the maternal mortality rate has increased as the number of women giving birth on Medicaid has also increased. We should take a very serious look at the low quality of care some American women receive when they are shuffled into government programs rather than empowered to buy their own affordable, private health insurance.”

Ms. Manning added that Medicaid has poorer outcomes in almost every metric, in part due to the low quality of care available, and also of course due to the confounding variables related to poverty.

In fact, it’s poverty and women not being financially independent that keep us from being able to make the choices that best suit us. Like him personally or not, it’s undeniable that Mr. Trump’s policies have already improved the quality of women’s lives across the spectrum. Women’s unemployment is the lowest it’s been in 20 years. Unemployment of African-Americans is the lowest in history.

• 9.4 million businesses in America are owned by women.

• Women are graduating from college at a faster rate than men.

• More than 70 percent of moms have a job outside of family life.

It’s economic policy that makes the difference for women and their families. We all deserve serious policy proposals and action that results in meaningful, direct change. We’re getting that with Mr. Trump’s policy and legislation. With the Democrats, we get warnings of death and destruction. Perhaps they’re finally being honest about what their agenda has to offer.