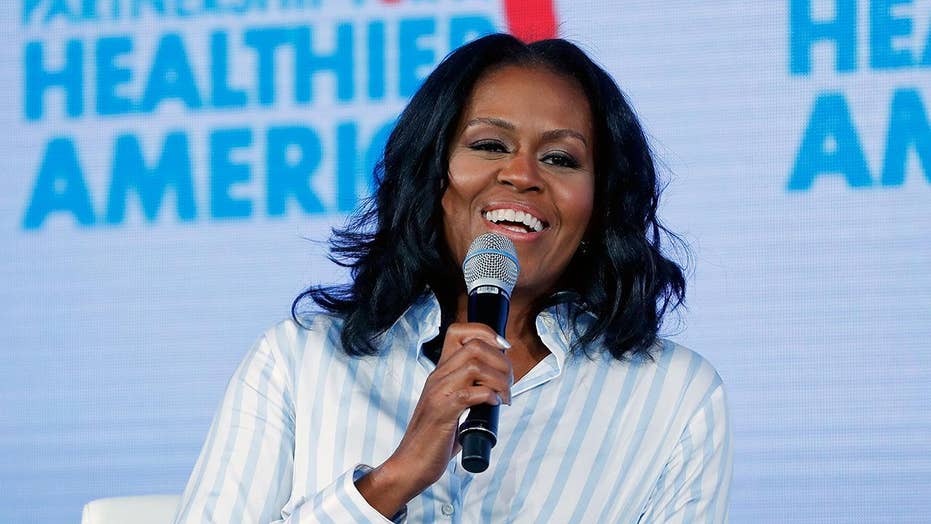 Reaction on 'The Greg Gutfeld Show' to the former first lady's comments.

Former first lady Michelle Obama is breaking her silence about a gang of people who did something awful because they’re empty-headed zombies and under some sort of mind-control by evil-doers.

No, she wasn’t talking about Islamist terrorists, gang members or cultists. Obama’s targets of ridicule and shame are … American women who voted for Donald Trump.

“Any woman who voted against Hillary Clinton voted against their own voice,” Obama told the audience recently at a marketing conference in Boston.

And what exactly does that mean? After all, the feminist movement was about women becoming free to be able to make choices that best suited us. I don’t remember any discussion that our independence really meant we should do whatever Hillary Clinton and her minions told us to do.

Someone should alert Michelle Obama and Hillary Clinton that the feminist movement was not about switching out the men we were told were controlling our lives only so ambitious, condescending, and smug women could lecture and shame us instead.

“It doesn’t say much about Hillary, and everybody’s trying to worry about what it means for Hillary and no, no, no what does this mean for us as women?” Obama asked. “That we look at those two candidates, as women, and many of us said, ‘He’s better for me. His voice is more true to me.’ To me that just says, you don’t like your voice. You just like the thing you’re told to like.”

Yet Michelle Obama wasn’t the only person smearing millions of American women as dumb and empty-headed, or worse, mentally ill, because they – gasp – are thinking for themselves.

Hillary Clinton was also diagnosing them with the same self-loathing disrespect. Because, let’s be honest, at some point you run out of Russians, sexism and misogyny to blame for losing the election.

Just a few days before Obama’s comments, Clinton took aim. In an interview on “AM Joy” on MSNBC, the defeated presidential candidate commented on why women voted for Donald Trump.

“When I see women doing that, I think why are they publicly disrespecting themselves?” Clinton said. “Why are they opening the door to have someone say that about them in their workplace? In a community setting? Do they not see the connection there?”

Someone should alert Michelle Obama and Hillary Clinton that the feminist movement was not about switching out the men we were told were controlling our lives only so ambitious, condescending, and smug women could lecture and shame us instead.

It’s understandable, however, that Obama and Clinton remain surprised by the results of the 2016 election and the fact that 42 percent of women voted for Donald Trump.

Underlying the sanctimony coming from liberal women who contend they know what’s best, is the feminist and leftist narrative that only certain issues are so-called “women’s issues.”

Instead, unbeknownst to these feminist Masters of the Universe, the movement itself created women who realized all issues are women’s issues. Yes, health care, violence against women, and equality matter to us, but they also matter to men. And like men, women’s issues include national security, the economy, jobs, immigration, crime and terrorism.

Not understanding that is the issue-equivalent of never visiting Wisconsin. Moreover, a recent Fox News poll found that two-thirds of Americans, with no gender or age gap, believe political correctness has gone too far. The rejection of the Obama and Clinton version of identity politics reflects that.

A symptom of their situational feminism, not mentioned by either former first lady, was that women were not thought to be deranged when they voted for a man named Barack Obama instead of Hillary Clinton in the 2008 Democratic presidential primaries. Oddly, there were no rebukes then by Michelle Obama about women “not liking their own voice.”

At a 2007 “Women for Obama” event in Chicago during the primaries, Michelle Obama was videotaped telling women not to vote for Hillary Clinton.

While not using Mrs. Clinton’s name, Mrs. Obama used a gendered attack, making her feelings clear about the marriage of her husband’s female opponent: “One of the things, the important aspects of this race, is role-modeling what good families should look like,” Michelle Obama said. “And my view is that if you can’t run your own house you certainly can’t run the White House. Can’t do it.”

In light of Michelle Obama’s attacks on women and in a genuine “pigs flying” moment, the Washington Post looked at the issue, with an article headlined, “Millions of American women disagree with Michelle Obama: Donald Trump is their voice.”

“I have always considered myself a feminist,” Guzin Karides, a Trump supporter and former attorney told the New York Times before President Trump’s inauguration. “For me, I want to be treated the exact same way. That’s not the feel I get from feminists today, they want extra privileges. I gave up my first marriage so I could be a law partner, and then I had to give up on my partnership so I could be a better mom.”

The economy and terrorism were the top issues for voters in 2016, including for women, and Trump's tough talk on terrorism was attractive to some women, the Post reported.

Here's a newsflash for both former first ladies Obama and Clinton: The feminist movement was appealing to so many women because we were tired of being bullied and shamed by others into behaving a certain way, and for having our personal and professional options limited.

We wanted, and fought for, equality and the economic independence it brings so we could be ourselves. In the case of the 2016 election, we voted for our country, ourselves and our families. For some women that meant voting for Bernie Sanders or for Hillary Clinton. And for 42 percent of us it meant voting for Donald Trump. Many decided to not vote at all.

But whatever choice we made, we made it because we decided, not because a man or a woman bullied us into it.