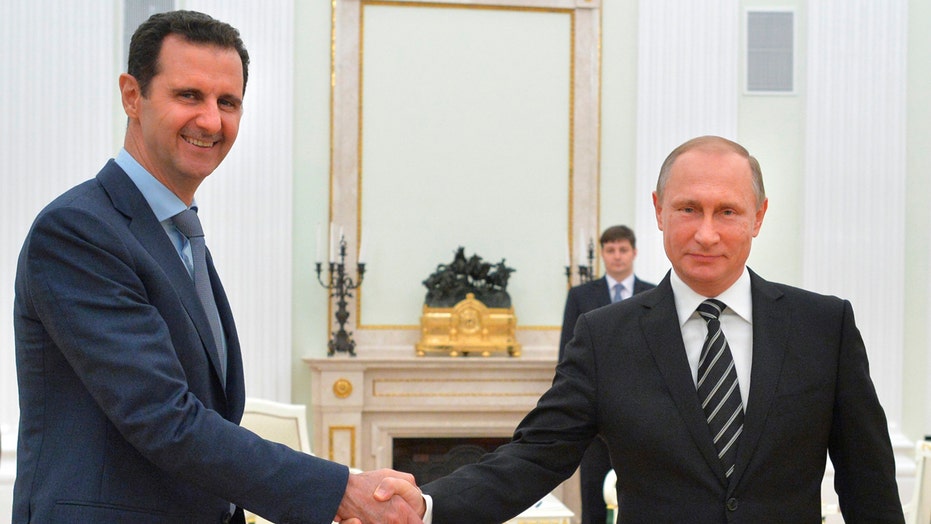 We can stipulate both that the dictator Bashir al-Assad is a tyrant and that he has at this point lots of blood on this hands after almost five years of civil war in Syria.

We can also concede that Russian President Vladimir Putin is intervening in the Syrian civil war to bolster Assad's minority Alawite regime for his own reasons, mostly to reclaim some shred of Russian influence in a country that once once a major ally in the Middle East of the Soviet Union.

Finally, in backing Assad with his newly professionalized armed forces, Putin is working hand-in-glove with the Iranian mullahs and  their shadowy Revolutionary Guard Corps.

But whatever his motives, Putin has the most realistic understanding of the way forward in Syria: Syrian president Bashir al-Assad has to be part of the solution.

Whatever his motives, Putin has the most realistic understanding of the way forward in Syria: Syrian President Bashir al-Assad has to be part of the solution.

This is a brute fact that other actors -- the U.S., Turkey, the Saudis -- have been slow to recognize. That failure goes some way to explaining the mess there that mostly benefits ISIS.

President Obama is much criticized this days for his restraint in engaging with the anti-Assad movement early on but such criticism ignores the fact that his Ambassador -- Robert S. Ford -- who was appointed after a five year hiatus in high-level diplomatic relations between the two states, very quickly made himself persona non grata for encouraging anti-Assad groups in 2011.

Ford's brief seemed generally in the line with the heady optimism of those early days of the Arab Spring in which it seemed that the U.S could ride that wave to broader regional reform and democracy and cast aside old authoritarian relics like the Assad regime.

Of course the Arab Spring turned into the long hot summer of discontent and then froze into the winter of renewed authoritarian rule in number of countries.

While in Egypt the United States made its peace with the Sisi military dictatorship, the Obama administration could never quite bring itself to reach a similarly pragmatic modus vivendi with Assad despite the cresting wave of ISIS and other radical Islamic forces.

While eschewing major direct military intervention save through limited air strikes, to the chagrin of the war Hawks on the right, the supposedly pusillanimous Obama was secretly funneling huge amounts of American money to chase the will-o-the-wisp of a moderate anti-Assad opposition force.

After spending $500 million and fielding only a handful of fighters, the bankruptcy of our policy became fully apparent:  We had succeed in prolonging a bloody stalemate in Syria that left only Islamic radicals with a better position in the conflict.

Now the president is being castigated for allowing Putin to throw Russian military muscle around to prop up the Assad regime.

If you listen to some Hawks, you'd think that Putin and the Russian Bear descended into Syria out of the blue.  Of course they did not; Russia has had a major stake there for years.

Moreover, Putin is demonstrating a surer geopolitical sensibility in recognizing that an end to the Syrian civil war that does not bring an even worse regime to power led by ISIS has to include Assad.

By stepping in now to prop up the Alawite regime in Syria, Putin is making clear that Russia is still relevant in the region. He is also backing the only credible military force on the ground, save perhaps for the Kurds in their small enclave in the north, that can stem the ISIS tide in the rest of the country.

As in Iraq, our relentless quest for the perfect solution -- a democratic, inclusive, yet militarily effective force -- has run aground on the jagged reef of Middle East reality.

The lesson of the quickly passing of the Arab Spring should teach us that such perfect regimes just don't exist.

Unlike Putin, who can live with that harsh reality, the United States and its regional allies have muddled along in a way that will lead only to further bloodshed and possibly the extension of ISIS influence throughout even larger parts of Syria and the neighboring region.

If Putin is willing to stick his hand into the hornets nest of this conflict, perhaps it might be better for us to let Russian soldiers do the dirty work that unfortunately offers the only road out of this mess.

That's not neat and pretty, but that's cold-blooded Realpolitik. Putin understands it far better than we do.