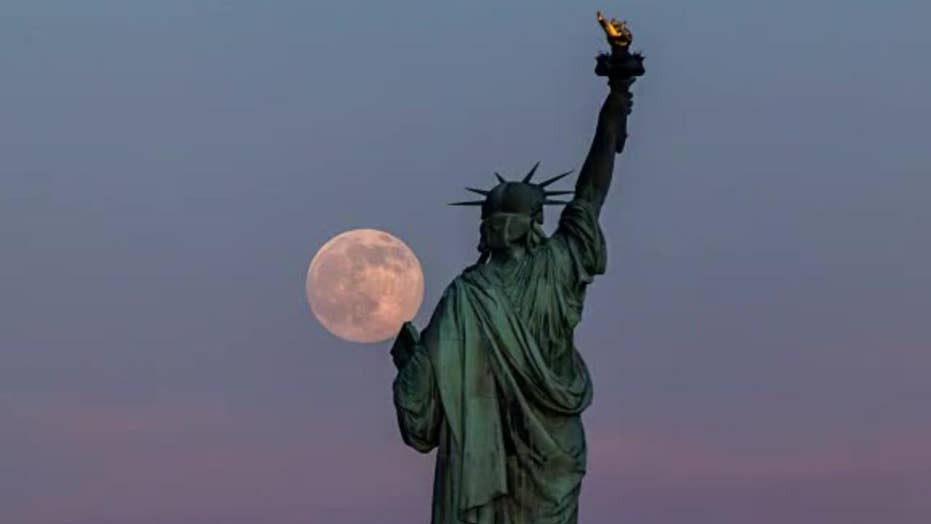 A rare celestial occurrence called a 'Super Blue Blood Moon' will be visible on January 31, 2018. What exactly is this rare phenomenon and where can you see it?

Not so long ago, Wednesday morning’s rare celestial event would’ve been dreaded as a triple-scary omen and had people shuddering in their shoes. For us today, though, it is a welcome respite – a spectacular reminder that despite the political chaos down here on Earth, the heavens are still operating like clockwork.

It’s difficult to pin a single name to this event because it comprises four things happening at once: a full moon, a supermoon, a blue moon, and a total lunar eclipse. NASA and others are dubbing it a “super blue blood moon” – which is as good a name as any.

We often say the stars are aligning, when something significant is afoot. That is certainly true here, except that the bodies lining up are the sun, Earth, and moon.

Under normal circumstances, the alignment of those three bodies – each doing its own thing, circling in its own independent orbit – happens once a month. The result is a garden-variety full moon, which is no big deal.

Every 2.7 years, however, the trio’s alignment happens more often than once a month – or, put another way, more often than three times per season. Astronomers call the extra full moon a “blue” moon – from the Old English word belewe, which means to “betray.” In effect, a blue moon betrays the normal course of events.

Every 2.3 years, the alignment occurs when the moon’s elliptically-shaped orbit happens to bring the moon closest to Earth – roughly 225,804 miles, versus 251,969 miles at its farthest. That difference is enough to make the moon appear about 14% bigger – which you can’t really notice – and 30% brighter, which is definitely noticeable.

Not so long ago, this rare celestial event would’ve been dreaded as a triple-scary omen and had people shuddering in their shoes.

Every 1.2 years, moreover, the trio’s alignment happens in such a way that Earth’s shadow reaches all the out to the moon, shrouding it in darkness. It’s what we call a total lunar eclipse, even though it really isn’t total. Some sunlight sneaks past the outer edges of our planet, is reddened by the atmosphere, and douses the darkened lunar face with a spooky-looking, bloody glow.

Far more rarely, all three of these celestial events happens at once – resulting in said super blue blood moon. The last time such an extraordinary moon was seen over American skies was more than 150 years ago!

In the U.S., the best view will be from the northwestern states – especially from the northern west-coast states. If you live there or anywhere nearby, plan to get up early to enjoy the full show.

If you live in northern California, for example, the eclipse will commence at 3:48 am PT, reach its peak bloodiness at 5:29 am PT, and resume its super brightness at 7:11 am PT.

Unlike the danger of looking at a solar eclipse, it is perfectly safe to watch a lunar eclipse with your bare eyes. If you aren’t able to watch it in person, don’t despair. Check out NASA’s live feed at https://www.nasa.gov/nasalive.

When the show’s over, it will be many decades before another super blue blood moon will be visible in the United States. Between now and then, who knows? Maybe the partisan and racial turmoil we’re experiencing down here will calm down and assume the orderliness and beauty that we see up there in the heavens.