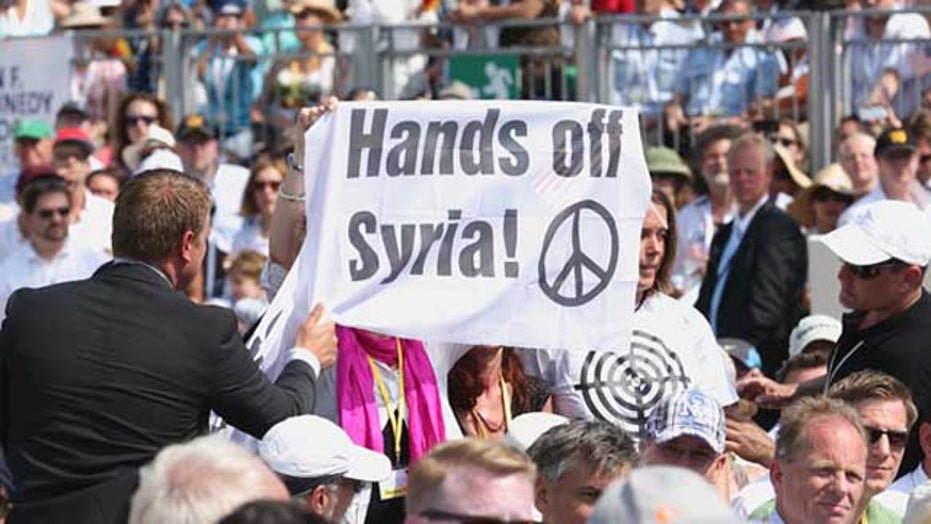 In April of 2011 when Bashir Al-Assad’s body count stood at just 200, I wrote on these pages that as a long-term bitter U.S. enemy, Syria is the Arab Spring’s ‘silver lining,’ and questioned why the Obama administration wasn’t doing more to support democracy there.

After all, President Barack Obama threw his full weight behind similar pro-democracy protests in Tunisia and Egypt, toppling long term allied governments, while launching “kinetic military action” in Libya, ousting a dictator who hadn’t posed a threat to U.S. interests in nearly a decade.

Islamist regimes hostile to U.S. interests wasted little time in taking power, contributing to the chaos that led to the Benghazi disaster and Egypt’s continued descent into the abyss.

Now well over two years and 100,000 deaths later, it finally appears that Team Obama will get off the sidelines and into the game in Syria. And it’s long overdue.

Four U.S. Navy destroyers equipped with cruise missiles are on station in the Eastern Mediterranean, and aircraft carriers USS Harry S. Truman and USS Nimitz are deployed to the region.

Though their firepower can damage Syria’s military as punishment for the chemical weapons strike last week killing over 300 civilians which violated President Obama’s “red line.” But just as we saw in Libya, real regime change in Syria would require a much larger, sustained campaign.

Yet by going to war, regime change will be exactly what we need.

Let’s recall the airstrike in 1986 against Libya’s Muammar Qaddafi in retaliation for the Berlin disco bombing targeting U.S. soldiers.

How did he repay us?

Let’s also recall chasing Iraqi forces out of Kuwait in 1991, only to leave Saddam Hussein in power. We later came to regret that decision as well.

Once we attack a ruthless dictator with deep terror ties, we cannot allow him to remain in power to seek revenge. Ignoring the danger Al-Assad poses through Hezbollah, a terror proxy for Syria and Iran based in Lebanon but with a worldwide strike capability including throughout the Americas, imperils us all.

As for U.N. approval, since Russia and China have blocked military action against Syria since Day 1, any U.S. strike would have be via a “coalition of the willing,” reminiscent of the tough decisions faced by President George W. Bush in 2003. Decisions so casually dismissed by then-Illinois State Sen. Obama.

And while it’s true that Syria’s Sunni-dominated opposition includes elements of Al Qaeda, the Muslim Brotherhood and other radical Islamists, at least there is a glimmer of hope that given the right level of U.S. and allied attention, a replacement government will be less hostile to the U.S., Europe and Israel than Al-Assad has been.

It’s hard to get any worse.

It’s still a state supporter of terrorism that funds and supplies Hezbollah, and serves as Iran’s top ally. Regime change will weaken both Hezbollah and Iran, two of the world’s most destabilizing forces.

And as for the 100,000 already killed in Syria and once low level demonstrations that slowly morphed into a jihadist-infested civil war, President Obama can only ask himself why he didn’t get involved to stop it earlier.