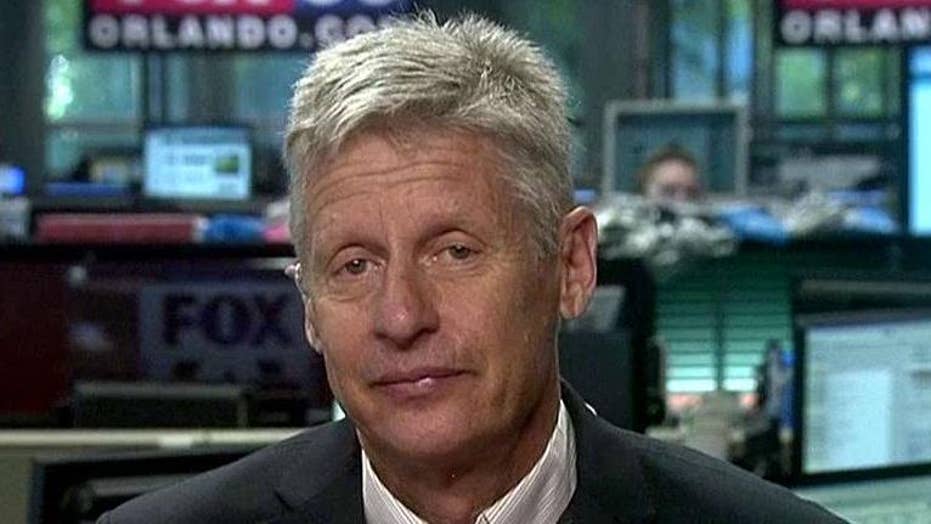 He didn't act like one when he and Johnson sat for an interview.

"This is the dream ticket for me," began Johnson.

"He doesn't look like a dream," I responded rudely. "He's not thought of by us libertarians as Libertarian."

"Weld got the A from Cato Institute," said Johnson, referring to the libertarian think tank. "Weld was declared the fiscally most conservative governor in the country ... First day in office, Bill Weld furloughs 8,000 employees."

I hadn't known that.

"Nine percent of the state workforce," said Weld, "and I never received a single postcard asking, 'Where are those essential 8,000 employees?' I cut the budget 14 percent my first two months. Piece o' cake ... I'd love to see the federal government receive cuts like that."

Johnson added that his running mate was "pro-gay, pro-choice and pro-medical marijuana at a time nobody else was talking about this stuff."

But Weld also supported the Iraq War, saying that George W. Bush had "grown in office." As Massachusetts' governor, he backed the drug war and restrictions on gun ownership.

Today, about Iraq, he said, "I wasn't exactly waving flags when the invasion occurred ... That Iraq thing has turned out to be one of the worst mistakes ever."

Why did he push gun regulation? "There are a lot of bills kicking around in Massachusetts. I've been a hunter my entire life, a gun owner my entire life. I really consider myself a Second Amendment guy."

Today, Weld says he's ready to legalize marijuana. Johnson goes further, "I'm not advocating legalization of other drugs, but if we legalized all drugs tomorrow, the world would be a better place. Ninety percent of the drug problem is prohibition-related."

Both candidates sounded pretty libertarian to me.

"We don't buy the dog food that either party is selling," said Weld. "We don't buy government making decisions for people in their private lives, part of the Republican Party platform, and we don't buy the Democrats' penchant for spending money that we don't have."

Do Libertarians have a chance? Early polls show Johnson getting 10 percent of the vote, even though most Americans don't know who he is. Once people get to hear him, that number will grow. Lots of people want to elect someone other than Donald Trump or Hillary Clinton.

"If Mickey Mouse were the third name, Mickey would get 30 percent," said Johnson, "but Mickey's not on the ballot in all 50 states."

Good point. Libertarians are the only third party likely to be on the ballot in all the states.

What else do Libertarians stand for? Speeches at the nominating convention offer a sample:

"There exist in America more laws than an average reader could read -- reading 24 hours a day, 7 days a week for 600 years."

"The alcohol, tobacco and firearms industry ought to be a store, not a government agency."

Are Libertarians "isolationists?" No. They want to intervene in foreign countries. "We just believe in intervening by dropping philanthropy, tourism, free speech and free trade on other countries instead of bombs," said one convention speaker.

He can level just as many complaints about Hillary Clinton.

The trial comes in November, and voters are the jury. I hope they decide to grant Americans liberty in both the personal and economic realms.

Clinton and Trump are punishments we don't deserve.