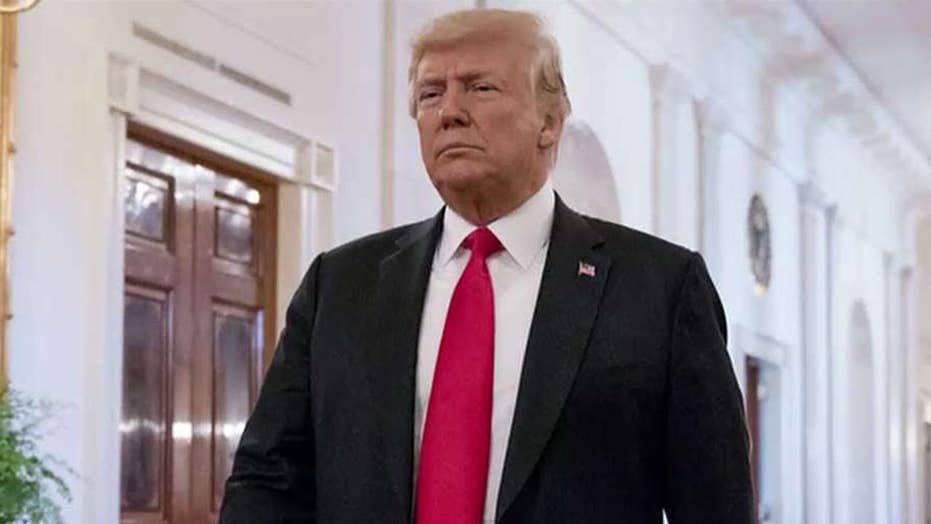 Does the New York Times op-ed prove the deep state is real?

The anonymous op-ed published by the New York Times describes a secret inside plot to protect the country from President Trump's 'misguided impulses'; reaction from Jim Hanson, president of Security Studies Group.

The anonymous anti-Trump op-ed published by The New York Times on Wednesday confirmed what we all suspected. Members of the arrogant ruling class in Washington, furious that a populist interloper was elected by the people to dismantle the elitist policies that have hurt working Americans for decades, are fighting back.

Elitist commentators have mocked talk of the “Deep State” as feverish conspiracy-mongering. Well, now we know the Deep State exists. There really is a group of people embedded in the federal government actively working to block the policies that Americans voted for.

At the same time, anti-Trump commentators have lectured us for two years about how this president is “undermining democracy” and “subverting” those famous “democratic norms.” Well, now we know they are hypocritical idiots (intellectual idiots, of course – per Nassim Taleb’s wonderful formulation.)

I’m not sure what could undermine democracy more than a policy that was clearly articulated as part of a winning candidate’s platform being blocked by bureaucrats or political appointees who no one voted for. Isn’t it quite an important democratic “norm” that the policies of winning candidates and parties get implemented, rather than the policies of the losers?

Perhaps the most enjoyable aspect of last week’s Washington elite meltdown was the hilarious spectacle of the left cheering on Goldman Sachs veteran Gary Cohn for his efforts to protect the profits of the super-rich from President Trump’s efforts to protect American workers.

Now the hunt is on to identify who wrote the op-ed published by The New York Times. But I fear that misses the point. Finding and even punishing this one individual is not going to solve the systemic and structural problem of the Deep State: the fact that we have permanent ruling class in our government that pushes forward an elitist policy agenda regardless of who actually wins elections.

I have a bigger and better plan, and it’s one of the ideas in my new book, “Positive Populism: Revolutionary Ideas to Rebuild Economic Security, Family, and Community in America.”

The first step in beating the Deep State is to unmask the Deep State. This idea goes back to my own experience battling the permanent bureaucracy as senior adviser to Prime Minister David Cameron in Britain.

Before Cameron was elected, I went to see former Prime Minister Tony Blair to ask his advice about how to be effective in government. One thing above all that I remember was his stark warning about the civil service.

Blair told me: “You cannot overestimate the degree to which the civil service and the bureaucracy genuinely see themselves as the guardians of the national interest. They think it’s their duty to block and frustrate the here-today, gone-tomorrow politicians who come in with their crazy schemes. That is how they think. You have to realize that they really are there trying to stop you doing what you want to do. You’ve got to understand that, and be ready to fight them.”

Blair’s warning about Britain’s Deep State was prophetic, as I discovered even before David Cameron took office as prime minister.

One of our key Conservative priorities was government transparency. We had pledged to publish details of everything the British government spent money on, as well as the names, job descriptions and the organizational charts of the entire civil service, so citizens could see what their government did.

In a meeting ahead of the election, Cabinet Secretary and the head of the civil service Gus O’Donnell asked me and David Cameron: “Of course you don’t really mean all this government transparency stuff, do you?”

When I replied that we very much did, O’Donnell gave me a knowing look and said: “Yes. Well, we’ll see about that.”

And indeed, once we were in office, the civil service bureaucracy fought tooth and nail against the publication of any information at all about its scope and functions.

And then it dawned on me: Blair was so right. The permanent bureaucracy, self-righteously convinced of its “noble” mission to protect the country from risk-taking, was never going to be an ally in the kind of radical change we were trying to make. The last thing they wanted was to decentralize power – that would mean less power for them!

I realized there was no way we were going to be able to truly decentralize power and make government more accountable unless we actually bit the bullet and cut back the size of the bureaucracy – drastically.

I had an idea: For centuries, the British Empire was run out of Somerset House, a magnificent, palatial complex on the Thames, not far from Trafalgar Square. Here were the offices of the empire’s civil servants.

In the colonial era when “the sun never set on the British Empire” because it spanned the globe, the offices ruled from Australia and New Zealand to Africa, India and the Middle East, and across the Atlantic to Canada. In addition to all those charges, Great Britain administered all of Ireland and Scotland as well.

“How many staff worked at Somerset House?” I inquired. The answer? Roughly 10,000. Well: if Britain could preside over the largest empire in world history from one building that housed 10,000 people, why couldn’t modern Britain – which now had no empire to administer?

Why was it necessary for Whitehall (the nickname of the core civil service in London) to be staffed by well over 100,000 people? Using Somerset House as a guideline, I proposed an experiment: to cut the central civil service bureaucracy by 90 percent for a year or two, and to see the impact. To me, it was the logical corollary of our plan to decentralize power. If we really meant that, we would need fewer bureaucrats at the center, surely.

As you can imagine, this plan did not go down well with either the political or bureaucratic establishment. The elites never want to give up power. But they must give up power – or have it taken away from them – if we are to make government truly accountable to the people.

The federal bureaucracy in Washington – the American Deep State – is sorely in need of just such a radical shake-up. In 2017, the U.S. government’s civilian workforce consisted of nearly 3 million taxpayer-funded jobs. Anyone who has been to Washington has seen in city block after city block the sprawling physical landscape of bureaucracy. But what exactly do they all do there?

Many must do important work. But let’s find out exactly what. Let's open them up to scrutiny and hold them to account. It's our tax dollars after all. Let’s start by bringing into the open the secret world of the Deep State bureaucrats. Publish every civil service organization chart, along with salaries and job descriptions.

Let’s Unmask the Deep State. That will provide the necessary intelligence for establishing the scale of the cut in its numbers that we need. In the process, let’s clear out all the leeches and hangers-on – the useless elite management consultants who earn a fortune from the taxpayer for writing endless PowerPoint presentations for incoming administrations that really do nothing but rearrange the deckchairs on this bureaucratic Titanic that is the federal government.

The result is a self-referential ruling class of mandarins stuck in acronyms, cost analysis reports, and legal jargon. Hardly the government “of, by, and for the people” that the Founding Fathers had in mind.

We’ll be discussing this topic on “The Next Revolution” at 9 p.m. EDT Sunday on Fox News Channel with Dana Perino, Candace Owens, Charlie Kirk and Tezlyn Figaro. Hope you can join us!