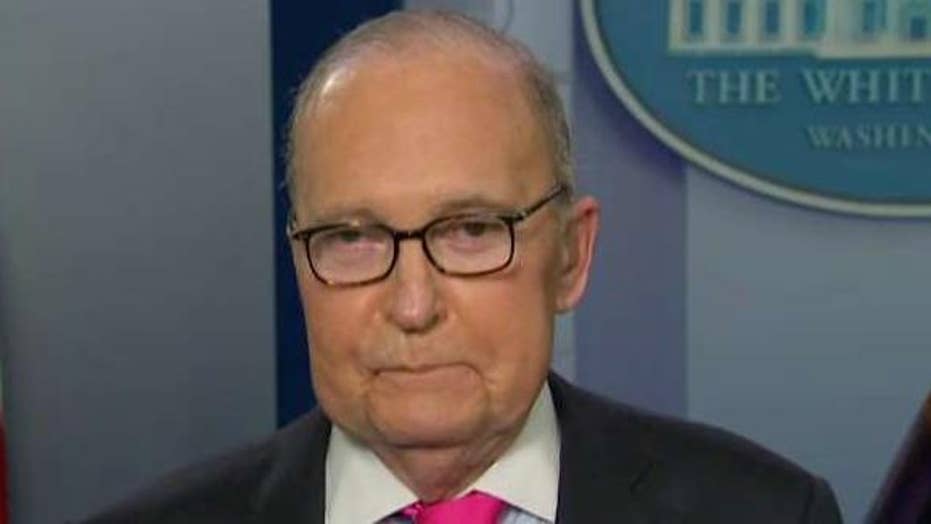 Larry Kudlow: We're the hottest economy in the world.

Director of the White House National Economic Council Larry Kudlow says indicators for the U.S. economy are pointing up, GDP will snap back from any 'glitch' created by partial government shutdown.

With the shutdown over (at least for now), the State of the Union address is back “on.” When President Donald Trump takes the House podium on Feb. 5, you can count on him to take the opportunity to celebrate one of his greatest achievements: the economy.

It is booming by nearly every meaningful measure, and the president has every right to take a large measure of credit for it.

ANDY PUZDER: PRESIDENT TRUMP DESERVES ALL THE CREDIT FOR OUR SOARING LABOR MARKET

And, no Congresswoman Alexandria Ocasio-Cortez, it is not because people are working two jobs and a zillion hours a week. Employment statistics don’t work that way. It’s because more people have jobs. And more people are encouraged about their prospects of finding a job.

Labor force participation continues to rise because strong wage growth is causing Americans who were once too hopeless to even look for work to pour back into the job market. In fact, unemployment ticked up slightly to 3.9 percent (still historically very low) in December despite adding 312,000 jobs because nearly 100,000 formerly “discouraged workers” decided to start looking for jobs.

For good reason. America has created more than five million jobs since Trump entered office. And for the first time there are more job openings in America than there are unemployed people.

Industries that some said were dead and never coming back – like manufacturing – are booming. Manufacturing added 284,000 jobs in 2018, the most in a year for more than a decade.

America has created more than five million jobs since Trump entered office. And for the first time there are more job openings in America than there are unemployed people.

A large part of these successes can be traced to the Trump-backed Tax Cuts and Jobs Act. In addition to sparking business investment and expansion by reducing corporate taxes, it also included a big tax cut for middle-class American families.

The average individual saw a tax cut of $1,400 while the average family with two children saw their taxes reduced by $2,917. In fact, Americans in every congressional district got a tax cut. While mega-millionaire House Speaker Nancy Pelosi dismissed a couple thousand extra dollars as mere “crumbs,” those tax-cut tidbits have been a big deal for the average working American and the economy overall.

President Obama – who presided over an average GDP growth of 1.65 percent – proved himself no economic Nostradamus when he said: “Two percent real GDP growth is the new normal for the U.S. economy.” Really? It shouldn’t be and under this administration, it’s not. GDP growth during the Trump administration has been nearly twice the Obama average, and was more than four percent in the second quarter of 2018.

And this is just scratching the surface: With consumer confidence rising, more pro-growth deregulation on the way, new trade deals being negotiated, and an energy boom on our horizon, we may be in for a much better “new normal.”

All this economic success is not just something the administration and the millions of Americans with good new jobs have noticed. The world has noticed. After a long decline beginning during Obama’s tenure, America, in just one year, has moved up six places in the Heritage Foundation’s 2019 Index of Economic Freedom because of the strong economic and deregulatory policies the Trump administration has enacted.

The president’s political opponents and the media can gaslight and uproot goalposts all they want – and they will. But the success of the Trump economy is plain to the millions and millions of Americans whose lives are measurably better than they were two years ago.

So when President Trump enters the well of the House next week, he can stand confidently before America and the world and say that, when it comes to the economy, “the state of the union is tremendous.”

Genevieve Wood is a senior adviser and spokesperson for The Heritage Foundation. You can follow her on Twitter @genevievewood